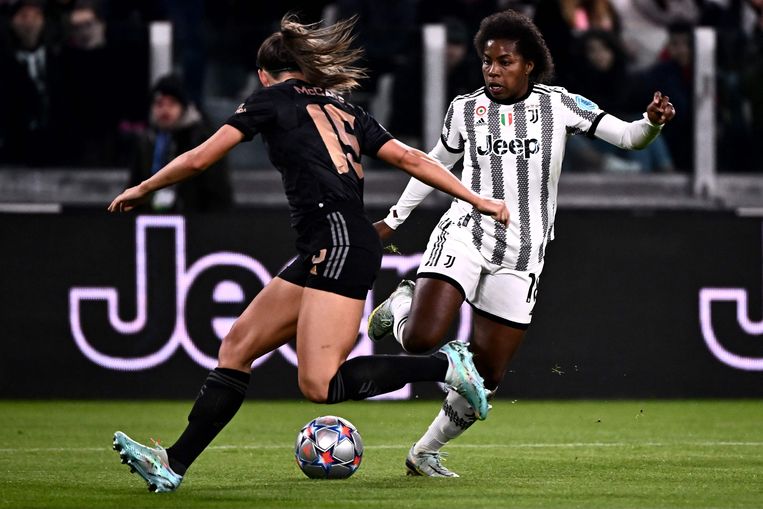 Sometimes an Italian term suddenly slips through when Stefanie van der Gragt is training with the Dutch team. No teammate who understands her, except when Lineth Beerensteyn is around. “Steef and I sometimes play around with that,” laughs the Juventus attacker, “then we throw in an Italian word that only we understand.”

Van der Gragt says honestly that after five months in Italy, mainly football terms have penetrated. ‘You shouldn’t come up with full sentences, then I really don’t know what you’re talking about.’

The two met again on Saturday when Van der Gragt lost at home to Beerensteyns Juventus in the blue-black of Inter Women. They are the first two Dutch internationals in a long time to play in Italy and they do not regret that choice.

‘The Italian league is a bit less known,’ says Beerensteyn by telephone. “But this competition is becoming more and more interesting, also because the clubs can attract many more international players.”

Like Van der Gragt, she knew little about Italian women’s football when she was approached earlier this year. The English, German, French and Spanish leagues are considered the most attractive in Europe, but Italy is catching up. Especially since major clubs from men’s football have also stepped in.

The clubs received a boost in 2015 from the Italian Football Federation, which was dissatisfied with membership numbers and international results. The union obliged professional clubs to set up a women’s academy or to cooperate with existing women’s teams. In the years that followed, more and more big names from men’s football took over clubs. For example, Cuneo changed into Juventus, Brescia into AC Milan and Res Roma became part of the capital AS.

“It actually felt good right away,” says Van der Gragt, who first looked around Milan for three days before signing her contract with Inter Women in the summer. The Internazionale women’s team has existed since 2018 and is now playing in the sub-top. “It is really still in the construction phase, but the club is behind it 100 percent. They want to see development every year, it’s nice to experience that.’

Defending in a different way

Just like Matthijs de Ligt before at Juventus, she has to get used to the way of defending, which is different from the Dutch team and Ajax, her previous club. Italian coaches insist that defenders should pay attention to the moving, deep players and not necessarily the ball. “You often do that automatically, but that is not necessarily the best thing,” explains the 30-year-old international.

Inter joined later than Juventus, which has been playing in Serie A since 2017 and has also won the championship each time in the five years that followed. But the competition is increasing, because AS Roma is currently first.

“We sometimes miss stupid points,” explains Beerensteyn, who came over from Bayern Munich. “That’s a shame, because we should just win those games. In the Champions League we have proven several times that we are not inferior to European top clubs.’

She herself recently opened the score against Arsenal, after which Vivianne Miedema made it 1-1 for the English. The club from Turin also played a draw against Champions League winner Lyon, with Daniëlle van de Donk and Damaris Egurrola this season.

In the Ernesto Breda stadium in Milan, Beerensteyn was at the basis of the final blow for Inter on Saturday. The two teams do not play classic Italian, especially defensively, but both want to win. They also had quite a few chances, but three shots from Inter ended up on the crossbar and the post.

Barbara Bonansea found the first hole in the Inter defense in the 50th minute. Two minutes later, Beerensteyn intercepted a ball and dribbled into the sixteen-meter area. Van der Gragt and the other defenders had her eye on her, but the Dutch gave the assist to the detached Arianne Caruso with a subtle pass.

The selections of both clubs consist of about a third of foreigners. The Serie A has been given professional status this year, abolishing the salary cap of 30,000 euros. Just like with the men, the football players in Italy also benefit from favorable tax rates. The FIGC aims for 50 percent more youth members over four years and hopes that strong competition and international success will contribute to this.

Van der Gragt, who previously also played for Bayern Munich and Barcelona, ​​already estimates the average level to be higher than that of the premier league. ‘We play a draw against clubs like Sassuolo and Como, results like 9-0 or 7-2, as in the Netherlands, you don’t see that often here.’

If it had been up to her, she wouldn’t have ended up in Italy at all. She decided not to renew her contract with Ajax at the end of last season, after the club told her that other players would be preferred. “I was really sorry at the time, because I really wanted to stay,” she says. The veteran was not ready for a role on the second plan, but as a pioneer in Italy that is not necessary at all. ‘I’m glad I was able to take this step.’