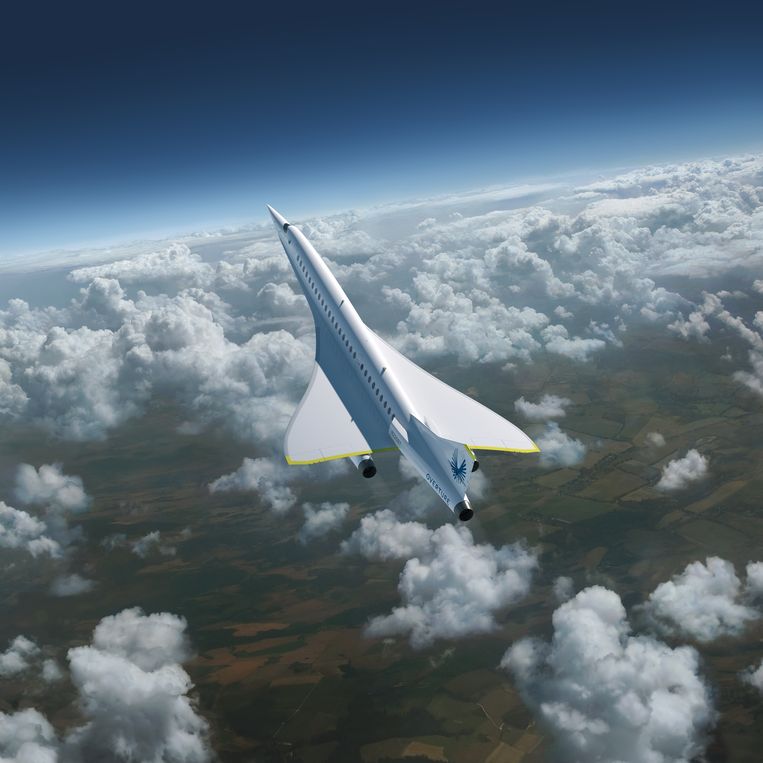 Sixty years have passed between the moment the Concorde came off the drawing board and the conception of the Overture, the new supersonic passenger aircraft of which the American start-up Boom Supersonic unveiled a test model on Wednesday. But how alike they look: the nose like a needle, wings that fan out from the mid-fuselage to the tail and the square engine inlets. As if time stood still.

The latter may be correct. After the French-British Concorde was taken to the museum in 2003, no major strides have been made in the technology that propels aircraft up to five times the speed of sound. That’s 1.6 kilometers per second. A Boeing 737-800 is six times slower.

The top speed of the Overture is 0.73 kilometers per second. The American is therefore slightly faster than the Concorde. It flies from London to New York in three hours. It now takes six to seven hours.

There are more heirs to the throne, but no project is as advanced as the Overture. Lenders have put in 160 million dollars (136 million euros). Remarkable: for such an amount, the builders thought they could develop the Concorde in 1962. The bill turned out seven times as high.

That setback made the Concorde far too expensive. Of the 350 aircraft for which there would be a market, twenty were built. “It is very regrettable that such an enormous amount of creativity, work and money has gone into making an airplane that actually has no lasting value,” a Concorde board member sighed in 2003 for British TV.

Boom also needs more money for his dream of an airplane that will take off on sustainable biofuel in 2029, with 75 passengers. The Overture costs 170 million euros each. There would be a market for a thousand to two thousand devices.

The money that Boom has collected so far has been used for the demonstration aircraft: the XB-1. It has a third the size of the Overture and only pilots. There will be test flights next year.

An important question is how much noise the XB-1 and later the Overture make. That was the Concorde’s Achilles heel. ‘Because of the booms that the Concorde made when it passed through the sound barrier, the aircraft was only allowed to fly at full speed above sea,’ explains aviation expert Joris Melkert of TU Delft. Even before the aircraft became operational, the Americans banned supersonic flying over land. That might not have been the death knell for the Concorde, but it was a dagger. ” After lawsuits, the aircraft was only allowed to fly to New York and Washington.

There were more countries that resisted the troublemaker. “That led to one airline after another canceling the plane,” says Melkert. Of the less than twenty customers who ordered more than sixty Concordes, only Air France and BOAC (now British Airways) remained. Another thing that killed Concorde was the emergence of the Boeing 747, which could carry many more passengers: up to 400 against 128 in the Concorde. ‘The Jumbo jet opened the market to the masses.’

The noise of supersonic flying is being worked on. ‘In the US they are experimenting with low boom technology, in which aircraft make much less loud bangs when they fly overhead,’ says Melkert. “It wouldn’t sound louder than slamming a car door.” The Overture does not produce more noise than current aircraft, Boom contends.

Can you fly even faster? ‘It is possible in theory’, says Melkert. “Missiles are already going faster.” The challenges in hypersonic flying are the shock waves that can unbalance a plane and the air resistance. Due to friction, the temperature can reach 2,200 degrees Celsius. Steel already melts at 1,370 degrees. ‘To reduce air resistance, passenger planes should fly outside the atmosphere. Will it ever come to that? Never say never. But I certainly don’t see it happening in the next ten or fifteen years. ‘

The Russians were the first in 1968. Two months before Concorde, the TU-144 made its maiden flight. Technically, the plane was a breaking leg: it made only 102 commercial flights. Such serious defects occurred on the eightieth flight that it was cut short. In 1973 a TU-144 crashed at an air show in Paris, in 1978 during a test flight. After that latest crash, passenger flights came to an end. In 1999 the remaining twelve Tupolevs were retired.

For half a century, the Franco-British aircraft was the showcase of supersonic flying. It had its maiden flight in 1969. Commercial efforts did not come until 1976. Tickets were expensive: a return London – New York in 1979 cost nearly $ 8,000 (now $ 12,000). KLM also considered buying the Concorde, but decided against an order. In 2000, Air France Flight 4590 crashed near Paris. There were 123 deaths. Air France and British Airways said goodbye to Concorde for three years.

US President John F. Kennedy didn’t just want the US to be first on the moon. He also wanted to be the first to fly supersonic in 1963. The Boeing 2707 was chosen in 1967 from numerous proposals. This airliner never materialized: Congress turned off the money supply four years later, despite 115 orders. In 2018, Boeing presented plans for an airplane that flies five times faster than sound (Mach 5) with 20 to 100 occupants.