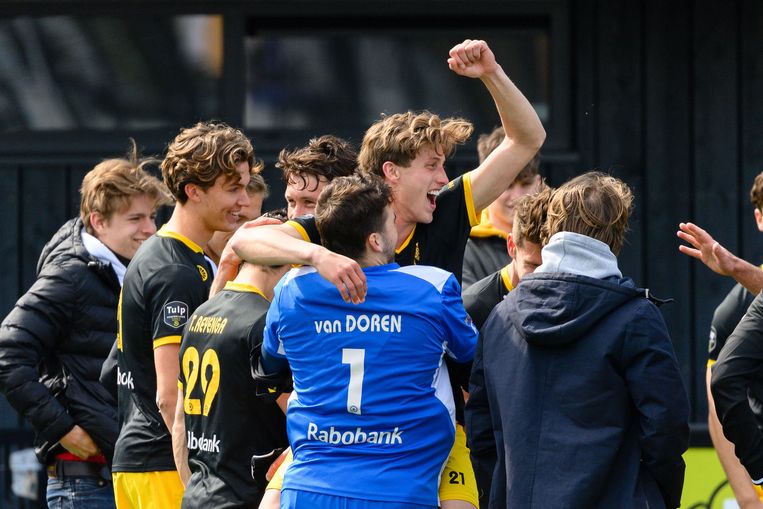 Fragments of coach Eric Verboom’s pep talk blow over the hockey field, right next to the A2. He admonishes the men from Den Bosch after the first quarter. No goals were scored against Hurley from Amstelveen. That has to be done, because there is something at stake. For the first time in 20 years, the team can reach the play-offs.

Verboom’s speech is effective. Immediately upon the resumption of the league game, the team from Bosschen storms towards the goal of the opponents. The result is a penalty corner, which is cashed in by captain and top scorer Austin Smith. ‘It is important to occur in the beginning. I understand that Eric was on top of getting everyone sharp and alert, ‘he says afterwards.

The 35-year-old South African Smith juts out his teammates after his goal. Not long after, the second goal was scored, after a nice attack from the right flank finished by Jelle Galema. In the last quarter, Koen Bijen takes the 3-0.

Then the time has finally come: Den Bosch reaches the play-offs, the final battle for the national title for the top-4 of the regular competition. That fact falls a bit dead in the empty stands, but the stadium speaker assures the handful of people that under the prevailing corona measures are present that there will be cheering at home for the livestream.

Smith, a teacher at an international primary school in Eindhoven, also had to wait a long time: 12 years. A few times in his career he played with the idea of ​​switching clubs. To compete for the national title in a different shirt. He didn’t, because he wanted it with the club that had given him such a warm welcome in 2009. ‘The fact that I can do this with guys that I sometimes played with for eight years makes it extra special.’

The difference is big between the men from Den Bosch and their female club mates, who beat Laren 6-0 two hours earlier and close the regular competition as leader. In the 20 years that the men hoped in vain for a place in the play-offs, the women became champions 15 times.

Last year, the men from Den Bosch were in second place in the league, but then a line went through due to corona after the 15th round of play. This season, the team seemed to have lapsed into old behavior and were in seventh place after 15 games. Not that they played badly, says Smith, but the results were disappointing.

A good month ago it suddenly worked. ‘I don’t even know exactly what has changed. Maybe that click was finally there. ‘ Six games in a row were won and all of a sudden Den Bosch was fourth for the final game. Albeit with only two points margin on Pinoké. The team did what it had to do: a seventh victory.

On Wednesday evening, Den Bosch will compete in the first of three semi-finals against Bloemendaal, the club that is at the top. The other matches for the final place will be played between Rotterdam and Kampong.