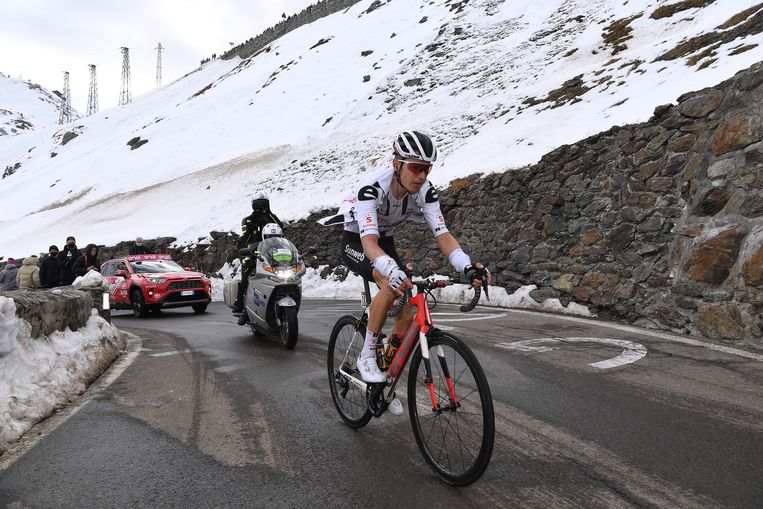 At the start of the Stelvio, the executioner in the stage, Kelderman cannot imagine that yet. He is in a luxurious position. His helpers have just shaken off the rosette sweater João Almeida and the majority of the other classification men. And when former world time trial champion Rohan Dennis on behalf of Ineos’ leader Tao Geoghegan Hart reduces the group to four, things look even better. The 29-year-old Dutchman virtually rides in pink and still has Hindley with him.

But then, with a good 45 kilometers to drive, Kelderman has to leave a gap. The trio drives away from him meter by meter. Suddenly, the Sunweb team management faces a dilemma: should Hindley wait or not? On paper, Kelderman is the leader. The classic approach dictates that his adjutant must stay with him.

But Hindley is only one place behind Kelderman in the standings. If he waits for Kelderman, they lose time together, the team also wastes Hindley’s chance for the overall victory. After all, Geoghegan Hart is only one second behind the Australian.

And then there is the future. Kelderman is driving his last race for Sunweb in Italy. He will soon move to Bora-Hansgrohe. Hindley has an ongoing contract and as a 24-year-old still has his best years ahead. Does that play a role?

In any case, it is quickly clear that Kelderman must manage it himself. Hindley has to stay with Geoghegan Hart and Dennis. Nothing more. From the car he is instructed not to do any head work and not to attack.

Kelderman sees him slowly disappear from sight. He lost almost a minute in the last 7 kilometers of the climb. With Hindley ahead of him, it wouldn’t have been much less. The pace on the steep col is too slow to take advantage of the aerodynamic advantage of hiding behind a teammate.

In the descent, which he knows well, the Dutchman knows how to cut some of his backlog. But then, on the 7.5 kilometers to the final climb, his loneliness begins to take its revenge. While Geoghegan Hart can hide in the wheel of Dennis who is still racing, and Hindley can also let himself be sucked in, Kelderman has no shelter.

“I would rather have seen it differently,” he would later say to the NOS. He doesn’t have much firmer words for it. Kelderman rarely shows upset and understands the dilemma of his team management. And in the end it had worked out well. ‘Jai wins the stage here and with me in pink it couldn’t be better.’

On the way, Kelderman does seem annoyed. When his sports director, after handing over a water bottle, accelerates to drive to the leading group, the driver makes a desperate hand gesture. It is the phase in the match that Kelderman seems to lose the Giro, seems to give up. Especially when he is passed by Pello Bilbao and Jakob Fuglsang at the bottom of the climb. He doesn’t even attempt to hook up.

Yet Kelderman does not give up. He chooses to ride at his own pace. In the meantime, Geoghegan Hart at the front lacks the legs or the courage to really continue on the climb to Laghi di Cancano. The pace slows down and Kelderman even manages to get a few seconds closer. Hindley saves himself behind the Brit to win the sprint.

And then the clock is ticking for Kelderman. He is having a hard time, counting the hectometres to the finish. “There wasn’t much left, but it was enough.” He is left with 12 seconds on Hindley, 15 on Geoghegan Hart. Finally, after years of bad luck and setbacks, he gets to put on the leader’s jersey in a grand tour.

The question is whether he will still have it on Sunday. On Saturday, when there are three climbs to Sestriere, he will have to join Geoghegan Hart and Hindley. If that does not work, he can still repair the damage on Saturday in the final time trial in Milan. In the race against time on Saturday last week, Kelderman was a lot faster than both.

He doesn’t want to think about it too much just yet. First, wrap up Friday’s sprinter stage in pink. “We’re going to recover, make plans and then we’ll see.”

Dumoulin in Vuelta on economy mode

Irishman Dan Martin has won the third stage in the Tour of Spain. He was the first to top after 166 kilometers with a difficult final climb. Classification leader Primoz Roglic of Jumbo-Visma came in second before the Ecuadorian Richard Carapaz and Wout Poels. Tom Dumoulin also came in behind on Thursday. After two difficult days in which the Limburger lost a lot of time, he drove the third stage on the ‘saving mode’. In the coming days, the team management of Jumbo will decide whether it makes sense to continue.