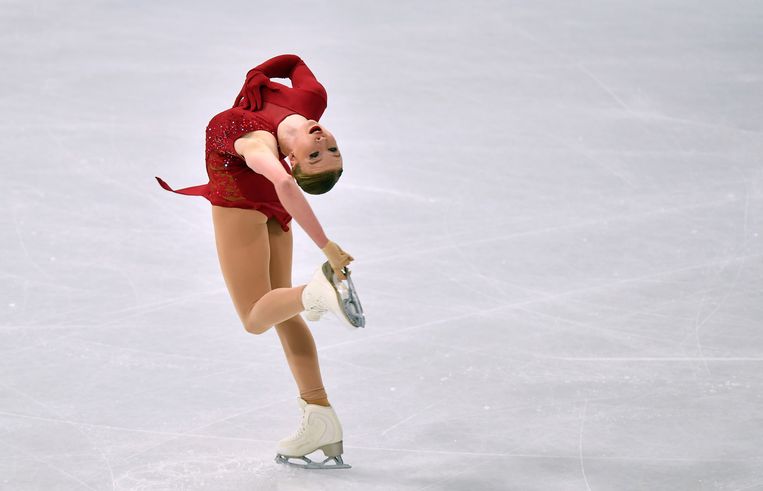 Van Zundert’s Belgian coach Jorik Hendrickx, herself a two-time Olympian, was not surprised by her good performance in Stockholm. He and fellow coach Carine Herrygers have been working with Van Zundert for a year and soon realized what she can do. Hendrickx. ‘What Lindsay has shown speaks for itself: she is among the best in the world. And she is only 16, so there is still room for growth. ‘

In figure skating, skaters more often break through at a young age. In fact, there are also those who drop out early. Hendrickx: ‘The sport demands a lot from the body, especially the jumps and pirouettes. Often the young bodies are completely exploited. ‘ As an example he cites reigning Olympic champion Alina Zagitova, who conquered her title at the age of 15 and now no longer skates any competitions. “We have to avoid that with Lindsay.”

In any case, that is a big difference between countries such as Russia and the Netherlands. The Russian skaters are intensively coached from an early age. It is not for nothing that they excel in the most physically difficult parts of the sport: the quadruple jumps. Van Zundert did not receive that early intensive supervision.

On the one hand, that is an advantage, because she did not burn out her body. On the other hand, it puts the MAVO-4 pupil at a disadvantage. While the Russians are drilled into the hard work, she still has a way to go.

The fact that she already scores so well gives an impression of her capabilities. The career of her training mate Loena Hendrickx, her coach’s sister, offers perspective. She made her debut at the World Cup in 2017 as a 17-year-old with the 15th place and surprisingly ended the last World Cup as 5th.

If Van Zundert also wants to grow into the global top-5, participation in next year’s Games is a requirement, her coach thinks. If it is not for a good result in Beijing itself, then at least with the Games of 2026 in prospect. ‘In a jury sport like figure skating it is important to build brand awareness,’ he says. “It is important that the judges get to know you and that is only possible by participating in the biggest tournaments.” Consciously or unknowingly, jurors rate established names higher. Strangers are 1-0 behind.

On Tuesday, the KNSB announced that Van Zundert has not only qualified according to the standards of the international skating union (ISU), but that she also meets the requirements of NOCNSF. In the run-up to the championship, the skating association was still under the assumption that only a top-12 position would provide access to the Games. Thanks to Van Zundert’s performance, that qualification requirement turned out to be more flexible.

It could also have turned out differently. In 2001 Karen Venhuizen finished 22nd at the World Cup and thus met the requirements of the ISU. But NOCNSF did not send her to the Winter Games in Salt Lake City.

If that had happened to Van Zundert, it would have been devastating for her career, thinks Hendrickx. ‘A top 12 position is realistic for Lindsay, but figure skating is a sport in which you have to grow. You cannot determine that on the basis of one World Cup. ‘

The ticket is now in, but there are still plenty of challenges. Especially financially. Because although figure skating is the most popular Olympic winter sport worldwide, it is scraping in the Netherlands. Van Zundert can count on a contribution from the Netherlands Figure Skating Foundation, from former figure skater Joan Haanappel, but she and her parents also pay a lot themselves. The KNSB only takes care of the broadcasts to major tournaments.

It greatly limits its options. Hendrickx: ‘Now the budget is always leading, while for top athletes the program should be leading. She hasn’t been able to train the way she wants for years and yet she gets an Olympic ticket. ‘

This is thanks to her cast-iron mentality, which she also showed at the World Cup. She was the first to hit the ice in both the short and long freestyle. That is disadvantageous. The judges often judge the opening rider with restraint. “And you have to set the tone.”

She did not let herself be fooled, but rode her freestyle exactly as it was planned. Without making mistakes. That is what Van Zundert is all about. “She always goes for it, she can really fight.” That will be no different in Beijing next year.