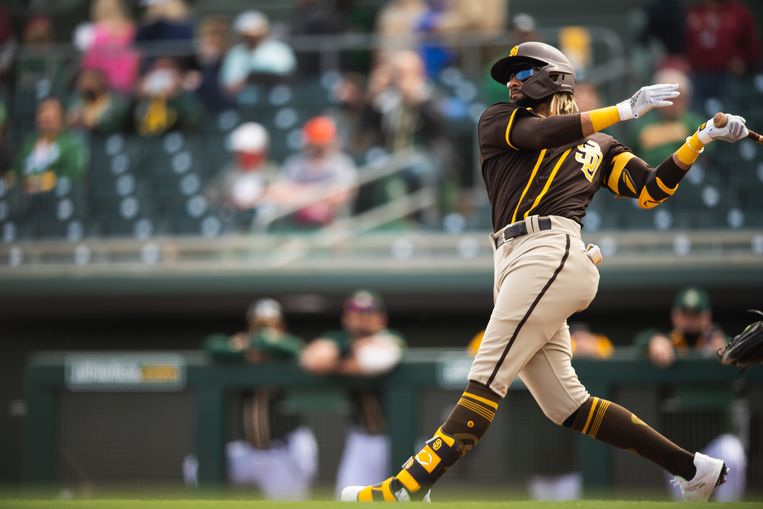 With his flowing, bleached dreadlocks, boundless energy and visible joy in the game, baseball player Fernando Tatis Jr. (22) seen as the new, fresh face of his sport. The exuberant Dominican shakes up conservative baseball with an unconventional style that especially appeals to a new generation. On Thursday he will start a season that should be his with San Diego Padres.

After 143 games in two seasons, his club had seen enough to offer him a mega contract: in February, Tatis Jr. for fourteen years and 340 million dollars (about 290 million euros). The commitment is record length: when the contract expires, Tatis Jr. 35 years old. “I want to get a statue here,” he said, signing his signature.

In San Diego they know what they have in store for him: a gifted powerhitter, a spectacular fielder at times and a daredevil who seems to have no doubts. In his first season in the MLB, he reached home plate from first base after a teammate hit a simple ball through the middle to an opponent. In amazement, he saw how Tatis Jr. sprinted past third base on his way to home plate.

In a sport that has been accused of being sleep-inducing and struggling to capture new audiences, the character Tatis Jr. as called. The short stop is stellar, already one of the best at 22, but it is his style that many believe allows him to transcend baseball. It’s in his head of hair, the chronic smile. It’s the dances in the dugout and the pink accessories in his outfit, a tribute to his mother’s favorite color.

This year he is a cover girl for the game MLB The Show. On the cover he is depicted in a pose in which he throws his bat away, the so-called bat flip. Tatis Jr. masters it like no other.

After hitting another home run, he launches his weapon into the air with a flick of the wrist before launching the corridor to home plate. It is a sign of force majeure that purists do not praise. They think that exuberant cheering is not done. Disrespectful to the opponent.

The noises have been silenced in recent years, partly due to the arrival of Tatis Jr. The MLB embraces his personality, recognizes that stars like him can help the sport move forward. Let the boys play, it already sounded two years ago in a commercial of the competition. Give them the pleasure.

In a Gatorade sports drink commercial, Tatis Jr. the American public that it’s cool to break unwritten rules. Baseball is full of it.

A home run by Tatis Jr. against Texas Rangers brought him a storm of criticism last year. With the bases loaded, leading 10-3 and Tatis Jr. behind the strikeguard, the pitcher first threw three balls, after which he had no choice but to throw a strike. Tradition has it that it would be unfair for a hitter at that time, with a large lead, to lash out. The pitcher would be exposed. The motto: let go.

Tatis Jr. lashed out and hit the ball over the gates for four points. A grand Slam. A dance followed at the dugout, but also a scolding from his teammate Eric Hosmer.

His coach, Jayce Tingler, stated that there was no intention to boost the score. Tatis Jr. himself apologized, but at the same time showed a lack of understanding for the unwritten rule. His main support underlined that old-fashioned ideas in baseball are slowly but surely fading. “Keep your energy and flair, because that’s what makes baseball fun,” Trevor Bauer, pitcher of Cincinnati Reds wrote on Twitter. “All you did wrong was apologize.”

In San Diego, Tatis Jr. his fate to a club that only reached the play-offs six times in 52 seasons. This year the selection has been strengthened and the Padres are the favorites for the championship. The club will compete in its division with reigning champions Los Angeles Dodgers. From Tatis Jr. a pioneering role is expected, but he does not seem to feel any pressure.

El Niño, nicknamed in his home country, plays as he did as a child: uninhibited and with pleasure. As an example, he has his father, Fernando Tatis Sr., who played in MLB for eleven seasons. “He’s already much, much better than I ever was,” he said. “Only god can stop him.”