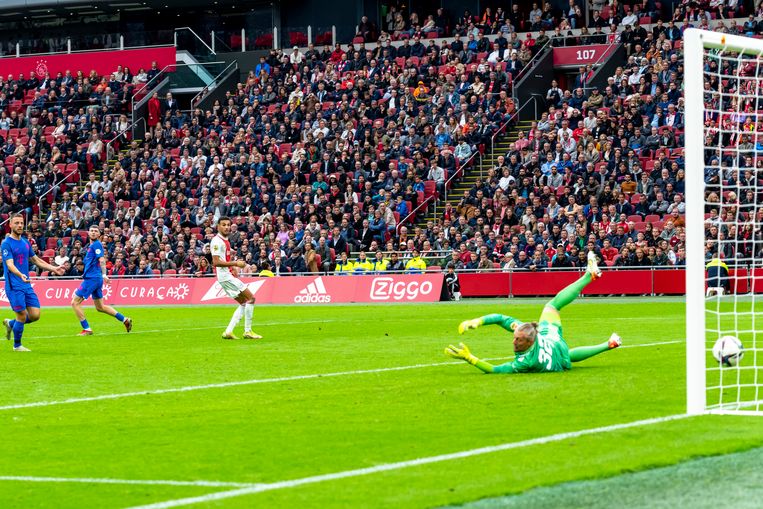 After a few phenomenal saves, goalkeeper Maarten Paes drops to his knees after 95 minutes of football, after the victory over Ajax. It is in a way the most sensational result in this relatively early season. The result also that the Eredivisie needs, to maintain the belief in tension to somewhat maintain the top position. And because sport is more than putting the best players together and waiting to see how high the result is.

Other aspects count: passion, cleverness. Good luck too. Ajax trainer Erik ten Hag judged afterwards that the team was not immediately ‘on’ and missed a few chances at 0-0, and captain Tadic adds that 90 or 95 percent passion is not enough. Certainly not against FC Utrecht, which is usually in its element when playing against Ajax. Then it puts on its battle suit, then the game of the year has begun.

The decision, more than ten minutes before the end, cannot even be called very surprising, at the moment that Ajax is pressing more and more and at the same time letting spaces fall. One Timber, Quinten, from Utrecht, plays a leading role as a substitute, with his great pass wide on Django Warmerdam, another boy from Ajax’s training. He scores with a diagonal slide. Goalkeeper Remko Pasveer could have done more, but the goalkeeper is simply not the strongest occupied position in the team. Speaking again to André Onana, whose suspension is coming to an end soon – it doesn’t seem to do any harm, especially with a view to Europe, although that book is closed according to the club.

FC Utrecht’s time-stretching sometimes takes on embarrassing forms, but René Hake’s team, which is so eager to participate in the top, is asking the utmost of Ajax on this Sunday. Playing compact, passionate, confident. That’s nice to see, against the leader who so far pushed all opponents aside in the Arena quite carelessly. And then suddenly many players do not reach their level, but that is certainly as much due to FC Utrecht as to Ajax itself.

Ten Hag makes three substitutions at the same time after an hour: the internationals Antony (almost), Davy Klaassen and Daley Blind for the internationals David Neres (formerly), Ryan Gravenberch and Nicolas Tagliafico, who are having a very mediocre afternoon. For a moment it seems that Ajax can force the decision, but it turns out differently.

FC Utrecht is good, more than solid in any case, disruptive and where possible offensive and effective. It is above all a high-quality fighting machine, which often runs at high speeds against Ajax. With Willem Janssen and Mike van der Hoorn in the center in the back, men who have been around for years and can never be fooled again, with all their experience and tranquility, their mannerisms sometimes too. They can irritate, they constantly push the boundaries. With Adam Maher as a master controller, a player who, on his good days, reaches the level of his best years when he was an international. With Joris van Overeem as companion, as determiner of rhythm. And with a more than smart striker, Tasos Douvikas, a talent from Greece, coming from Volos, a relatively small club. Smart, technical, combative, with his part in the hit.

FC Utrecht does not do what Cambuur did, participate completely naively and suffer the defeat. FC Utrecht also does not do what FC Groningen performed, especially time wasting and defending, in the knowledge that things would go wrong anyway, but hopefully not so bad.

Utrecht just plays football as it can, fierce, forward where possible, always with an extra scoop, with pressure when possible, compact, and thanks to a referee like Bas Nijhuis who allows a lot, who lets the battle be the battle. Moreover, with a fantastic keeper, Maarten Paes, the man of the match. Yes, Sébastien Haller has to score after a pass from Tadic, but Ajax gets relatively few chances after the sloppy final phase.

Paes’ three saves on two bets by Haller and one by Tadic, within a few seconds, are great. Masterfully crafted. Those saves give FC Utrecht air and courage, for that one beautiful breakout with a leading role by Douvikas, who shields the ball excellently. René Hake therefore beats Erik ten Hag, for his perhaps most beautiful victory as a trainer. The Utrecht cheer is Homeric and fills the Arena under the closed roof.