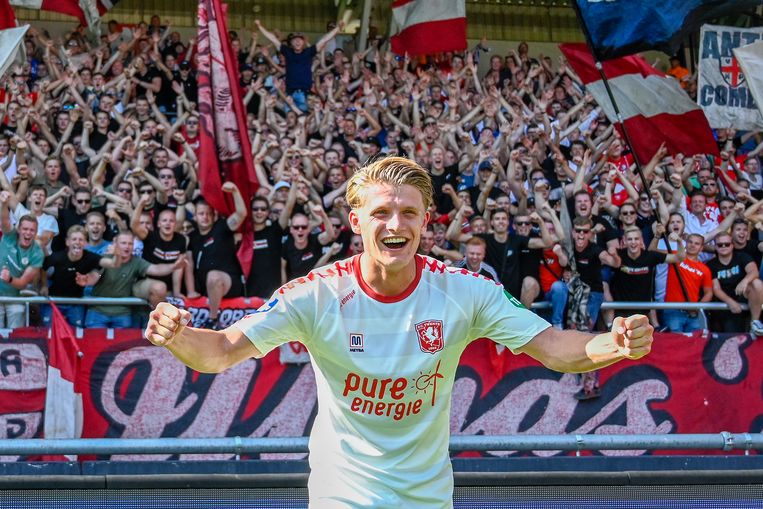 Robin Pröpper could hardly suppress a sly smile. The facial expression of the FC Twente captain was the reflection of the stolen victory (0-1) against NEC. “We won, but we also fell short in many facets,” he said on the edge of the field.

For a long time, the ‘champion of the preparation’ – Twente made an impression and did not lose a game in the run-up to the competition – immediately threatened to lose points in Nijmegen. But in stoppage time, substitute Sem Steijn took care of the undeserved, but liberating goal. The midfielder completed a watched bouncer from Joshua Brenet in a controlled manner.

Twente’s stiff and difficult game contrasted with the high expectations surrounding trainer Ron Jans’ team. Twente wants to build on the success of last season, when it surprisingly finished fourth, with European football as its reward. The club seems to have finally left the period of sporting and financial disaster behind.

Just think: four seasons ago, the 2010 national champion was still in the first division after years of financial mismanagement. Since then, Twente has started the long journey back to the Dutch sub-top, where it belongs in terms of stature and supporters. But that didn’t count during the football stronghold’s near-demise. This season Twente managed to increase the budget by five million euros, to thirty million.

A crucial blow was struck two years ago, with the arrival of technical director Jan Streuer and trainer Jans. The experienced duo managed to seduce the right players to come to Enschede and formed a close collective, with a tenth and handsome fourth place as a tangible result. It should be the basis for a new fertile season.

That is largely possible with the same selection, although Feyenoord would make frantic attempts to release midfielder Ramiz Zerrouki. For the time being, the club managed to keep the success team intact and strengthened itself with Steijn, who was picked from ADO Den Haag. The 20-year-old talent started on the bench against NEC.

More importantly, fixed values ​​such as Brenet and Michel Vlap could earn more money at Feyenoord and Fortuna Sittard respectively, but opted for the perspective and football happiness that they rediscovered last season in Enschede, with a full Grolsch Veste as an attractive backdrop. The club proudly announced that all 22,500 season tickets have been sold.

‘The outside world expects more from us and we put that pressure on ourselves,’ said Pröpper. ‘That is also allowed when you see our selection. We stayed together and a year later as a team. But that doesn’t mean we make it easy. If we think that, we’ll have a hard time against any opponent. You could see that today.’

The match against NEC came three days after Twente had made its comeback in Europe after eight years. Jans’ team won convincingly in the third preliminary round of the Conference League against FC Cukaricki (1-3). The return against the Serbian number three will follow in Enschede on Thursday, after which the Italian Fiorentina may wait in the play-offs, as the last obstacle towards the third European tournament.

With the diptych against Cukaricki in mind, Jans turned his entire vanguard in Nijmegen upside down. Van Wolfswinkel, Misidjan and Rots started on the bench. Cerny, Ugalde and Tzolis gained the trust of the former German teacher, but forgot to repay it. Twente hardly managed to create any danger with the attacking trio.

‘We also looked at each other when we saw the set-up’, Pröpper confessed. ‘But it also says something about the breadth of our selection. There is a lot of competition. That is necessary, because we want to reach the group stage of the Conference League. Then you play a lot of matches.’

It would be a huge boost for the club that is climbing out of the valley faster than expected. In the policy plan that was written last year, it can be read that Twente has set itself the goal of a place in the top ten this season. Participating in European football was actually only calculated over two seasons. Qualification for the play-offs for European football remains the starting point for this competition.

“When I say that we also expect more from ourselves, I am not necessarily referring to the position in the rankings,” said Pröpper. ‘But about the way we play football and develop as a team. We like to be dominant on the ball. We can still grow in that area.’

The central defender said nothing too much, judging by the duel with NEC, where newcomer Oussama Tannane was the most active and eye-catching player. Pröpper: ‘It wasn’t good enough, we know that. But it’s nice that we still win.’