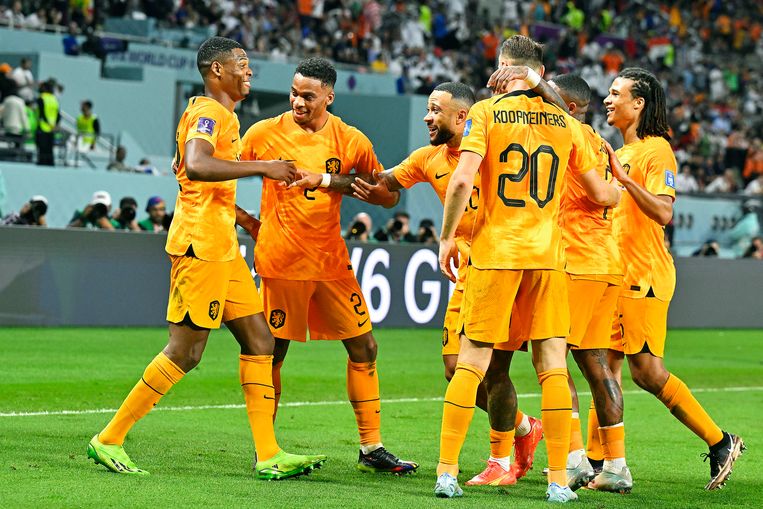 There he is, in the catacombs of the Khalifa stadium, Denzel Dumfries, 26 years old, climbed through the depths of amateur football, Sparta, Heerenveen and PSV to Internazionale in Milan, to 41 international matches and his sixth goal. Man of the match with a goal, with the left, and two decisive crosses. As a fullback, as a so-called wingback. Muscular torso. Open look.

He received a cup. In the press conference, national coach Louis van Gaal kissed him, because of pride and joy. ‘It wasn’t my first goal with the left, mind you.’ Then he praises Daley Blind’s cross: ‘A fantastic ball from Daley. I just had to run into it. He put the ball ready to cook.’

Until Saturday’s game, Dumfries played a difficult tournament. He openly criticized himself. When the Netherlands kicks off, he is usually already at the center line to show the offensive intentions. But coming up was difficult, also because the defensive opponents adjusted to him. But now, in the duel with the Americans, things are different. They themselves seek more depth and he is given space.

The match is going perfectly for him, and afterwards he wants to tell. Now is the right time, because mental guidance is a topic in football. ‘It is an underexposed aspect, and for me it was decisive. We are within society and we are also vulnerable. Because I am now open about this and can encourage others to seek help if they need it. By making yourself vulnerable.’

Ever since his time at Sparta, he has been guided by Annemieke Zijerveld, a clinical psychologist who works full-time in the sport. According to the website sportknowhowxl.nl, she is, among other things, specialized in depression and addiction problems and guides individual athletes to perform optimally in a sustainable way.

Dumfries: ‘You feel that you can do better. Mentally it was hard to get over that. Anyway, I have the right people to help me through that. In that respect, I’m glad I was able to get revenge. In recent days I have had a lot of contact with sports psychologist Annemieke Zijerveld. There may be a taboo about not talking about it. But I can say it best. It goes through Zoom. It’s not easy being a footballer sometimes. It’s not heavy, but it does something to you. You want to be important, do the best with the team, and mental resilience is important in that.’

When a reporter talks about the person behind the footballer, he agrees with that aspect. “I’ll be honest about that, it’s been tough lately. Then you have to find the inner peace to return to basics. She helps me with that, and I am grateful to her for that. Because today I had that inner peace to be important for the team.’ It’s not taboo, mental guidance, ‘perhaps to come out with it.’ At last year’s European Championships, performance coach Remco Visscher talked extensively about his sessions during the tournament with Matthijs de Ligt, Wout Weghorst and Stefan de Vrij.

Dumfries walked the long way. No one thought he would get that high as a footballer. Each time he took another step. He fought, he never gave up. ‘I can tell you, I am very critical of myself. You want better. It is important that you then keep the focus by continuing this line.’ He already had two conversations during the World Cup. The group also helps, it is very close, everyone is friendly with each other. ‘Everyone is involved with each other, including the staff. You have something to hold on to in the team. That is the strength of the team.’

He can be brief about the so-called withdrawn crosses from which Depay and Blind scored. ‘It was very funny, because Frans Hoek (assistant trainer) said that there was no room on sixteen. They were two fantastic goals. In the first goal you could see everything we want with this system.’ The ball went from foot to foot, in a raging combination from the left, through the center to the right, where Dumfries gave the cross to Depay. “Before you have the ball, you see where the strikers are and try to get them into scoring position. Today I am satisfied, although I think we can do better. The most important thing is winning.’