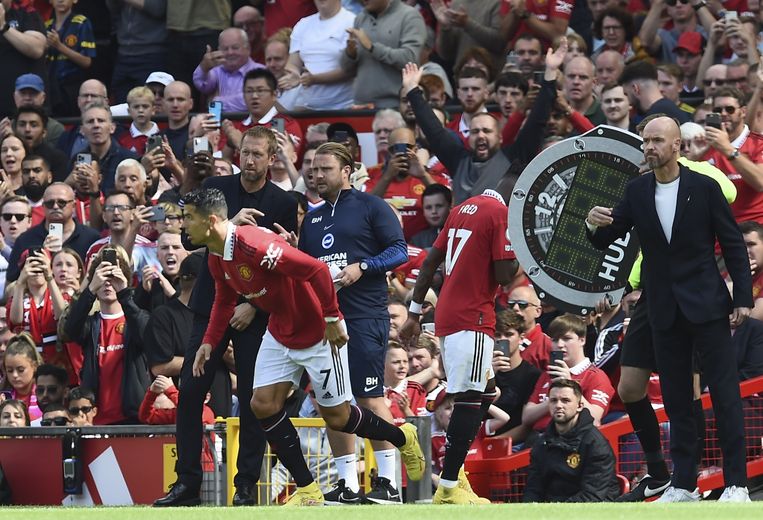 Exactly three months ago, Manchester United reached the low point of a disastrous season when they were penalized 4-0 by Brighton & Hove Albion on the final day of play. At the time, Ronaldo was annoyed by his teammates. Although he became the top scorer and scored many points, his nostalgic return to the old nest had turned out to be a disappointment. Manchester United finished in sixth place. The Portuguese decided to leave. After all, on his old football day he wants to play the Champions League, the competition where the CR7 brand belongs.

Three months later, Ronaldo was the last to enter the Old Trafford field, for the warm-up. With the reserves. Despite the absence of the designated striker Anthony Martial and the fact that Ronaldo had declared himself match fit via social media, Ten Hag had decided not to grant the sickly star a starting spot. Ronaldo had missed almost all of the pre-season and last week, after being furiously substituted in the exhibition game with Rayo Vallecano, went home in the second half. To be ahead of the traffic.

At the end of the first half against Brighton, the many United fans with Ronaldo shirts still got to see their idol: Ten Hag had warned the number 7 to warm up. The reason for this emergency measure was simple: Manchester, playing with Christian Eriksen as a false striker, had been outplayed by Brighton just like in the spring. In fact, after twenty seconds of play, the ball had almost landed in David de Gea’s goal, after a lingering Diogo Dalot had handed the ball in to Leandro Trossard near the edge of his own sixteen. The Belgian thought it was the side net.

This set the tone for Ten Hag’s debut. In a warm Manchester United played languidly and lethargic. In midfield, Fred and Scott McTominay – collectively referred to as ‘McFred’ – were just as bad as last season. Donny van de Beek, as usual on the couch, must have been dogged. In the packed stands many United fans will have asked why Harry Maguire is still captain and leading the defence. In Barcelona, ​​Frenkie de Jong will have seen the right of his decision to avoid Manchester.

Brighton, which has lost two of its best players this summer, tapped to their heart’s content, leading to two goals from Pascal Gross, the German who had also starred in the said 4-0. The second goal was a gem, a team goal that started with a playful heel at the own corner flag. Eight minutes after the break, Ronaldo finally came in, with shouting and cheering. Old Trafford hoped that the man who considers himself king of Manchester could play the part of the savior. Eriksen dropped back to the familiar midfield.

United’s game took on more urgency and direction, although the guests came out dangerous at times. Brighton should have had a penalty when Lisandro Martínez, who made a creditable debut, head over heels for the dangerous Danny Welbeck. More than twenty minutes before the end, the tension returned to the game when Manchester scored the connecting goal, a messy goal that was credited to Brighton’s Alex Mac Allister. For a moment The Seagulls seemed upset, but the team of Graham Potter, England’s best manager, managed to pull themselves together.

Ten Hag tried everything. He brought in Van de Beek, as well as the Spanish super talent Alejandro Garnacho. At the last minute, former Feyenoord player Tyrell Malacia also made his debut. Up front, Ronaldo was a bit lost, waiting for a pass to finish or a cross to head in. He himself gave Marcus Rashford an unmissable cross, but the attacker managed to miss him. Martinez had an excellent opportunity to make it 2-2, but his drive was blocked by Brighton captain Lewis Dunk. It was the last chance.

During the preparation, there was a glimmer of hope with the Mancunians. Discipline had returned, fitness improved and players who had been written off seized a second chance. In Thailand, arch-rival Liverpool were even beaten 4-0. Ten Hag scarves were for sale at stalls along Sir Matt Busby Way. However, one swallow does not make a summer, as it turned out in a match against a well-coordinated team. The painful defeat evokes memories of the debut of Louis van Gaal, who lost 2-1 to Swansea City, aka The Swans eight years ago.

This time it was The Seagulls who stood in the way of Holland’s glory.