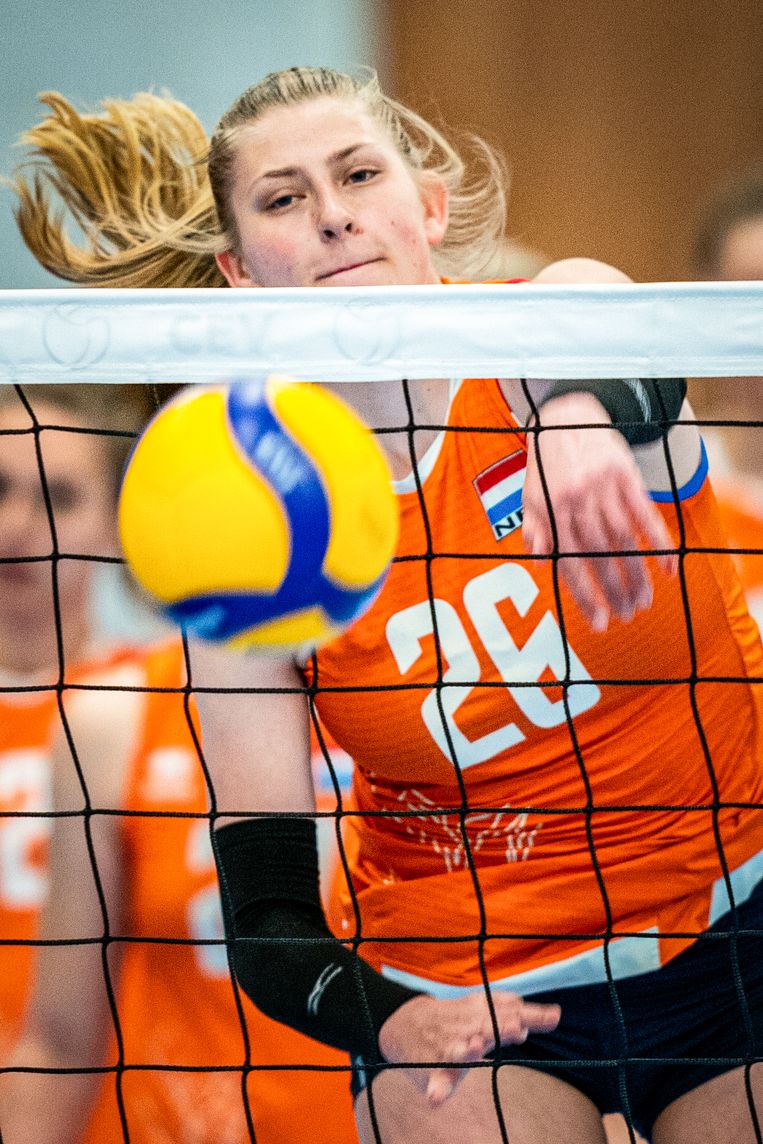 What is good comes quickly. An old adage from top sport has come into force again with the rapid rise of volleyball player Elles Dambrink. The 1.87-meter-tall woman from Krimpen aan de IJssel will only turn 18 next week, but was already in the starting lineup for nine international matches at the Volleyball Nations League (VNL), the sixteen-country tournament in Rimini, as a free attacker in the diagonal position.

She was unable to play more than nine games because of her postponed VWO exam. ‘I’m in the middle of that right now. I have had Dutch, history and English. Look up to the math exam. But I’m still good for it. I built up a buffer for the winter, because I knew it was going to be a busy summer. Now I don’t have to get sevens or eights to pass. Although I would of course like to get it.’

Dambrink achieved high marks in her nine international matches in the VNL. Playmaker Britt Bongaerts could lose a lot of balls to her. “Britt and I had an instant connection. She makes me feel good. If I’m not in position yet, she’ll give the ball a little higher. I can also communicate well with her about higher or faster. We can also do it easily. The other country teams don’t understand what we are saying, except for the Belgians.’

Dambrink, until this summer a player of the modest Laudame Financials VCN from Capelle, thought he could quietly experience what playing in the national team of national coach Avital Selinger would entail in Rimini. That turned out differently. ‘I had to start immediately from Avital. That was completely against expectations. On the other hand, it’s nice to have an entry like that. Yes, that’s called being thrown to the lions.’

She had to work, because Celeste Plak was not yet fully deployable. On the diagonal, Plak is considered the perfect successor to the irreplaceable Lonneke Slöetjes, but has been struggling with an injury to the Achilles tendons since the Olympic qualifying tournament in January 2020. Although Plak also had to work when Dambrink had to return to the Netherlands due to her school obligations (vwo-6).

‘It was a mixed feeling when I left Rimini. Me in that van to the airport. The girls wave me goodbye. Yes, I had to take those exams. But my feeling also said: everyone stays, then I want too. Finish the tournament. And every day just cross the road to the beach. I hadn’t seen the sun since last summer. In Italy I was pretty burnt the first day.’

In the Netherlands it is not just about taking blocks and exams. ‘When I have time to spare, I join the national youth team. Then I drive there after an exam for a training. We are now preparing for the Under-20 World Cup, which will take place in the Netherlands and Belgium in July. We have been placed as a host country. When my exams are over, I will definitely join the O20 team next week. There are many players from the Talent Team in Papendal, but also outsiders, such as Jolijn de Haan van Sliedrecht, Kim Klein Lankhorst of Apollo 8 and me.’

After the summer, Klein Lankhorst and Dambrink will join the 22 project, with which technical director Joop Alberda and national coach Avital Selinger create an emergency trajectory for talents. The goal is the 2022 World Cup, to have one or two young talents join the national team, which will then count people in their thirties such as Robin de Kruijf, Anne Buijs, Maret Grothues and Myrthe Schoot.

‘We will enter the Dutch competition as Team 22. Fleur Savelkoel from national champion Sliedrecht is participating, Demi Korevaar and Myrthe Schoot are returning from Germany. It will be a larger group than twelve who will train at Papendal. Girls from the Talent Team are added.

‘The association, the Nevobo, wants to prepare a group for next year’s World Cup. I did raise my finger. I was very interested in a place with that Team 22. The form of the project has changed a number of times. But now it’s fixed. I signed my contract. I get a fee. I’m going to live in Arnhem with one or two friends. I have registered for a study at the Radboud University of Nijmegen. See if that fits next to the volleyball that is now number one.’

The application in Rimini, the players’ agents must have written the left-handed diagonal neatly in their booklets, has no consequences for the time being. “I don’t have an agent or broker. I didn’t see the point of that. Because it is my permanent plan to stay in the Netherlands this winter.’

The goal is to become a better player, perhaps as good as Serbian Tijana Boskovic. The best volleyball player in the world is also a left-handed attacker. Dambrink saw her on TV at the 2018 World Cup. ‘You have a big advantage in the front right with your left arm. You can take the ball earlier, in front of the block, far from the antenna. It’s a big advantage, also because the blocking is mainly used by right-handers.’

Elles Dambrink knows this from her own experience.


The Dutch women’s team occupies joint fifth place with Russia after twelve of the fifteen match days in the Volleyball Nations League. The American team leads the ranking, with twelve victories, ahead of Brazil with ten. Japan, Turkey, Russia and the Netherlands will compete for the two remaining places in the semifinals from Friday to Sunday. The Netherlands has eight victories behind the name. Surprising were the victories over Russia, Serbia, Japan and Italy. The Netherlands will face Turkey on Friday, Brazil on Saturday and the group stage against South Korea on Sunday. Elles Dambrink was good for 95 points in nine games.