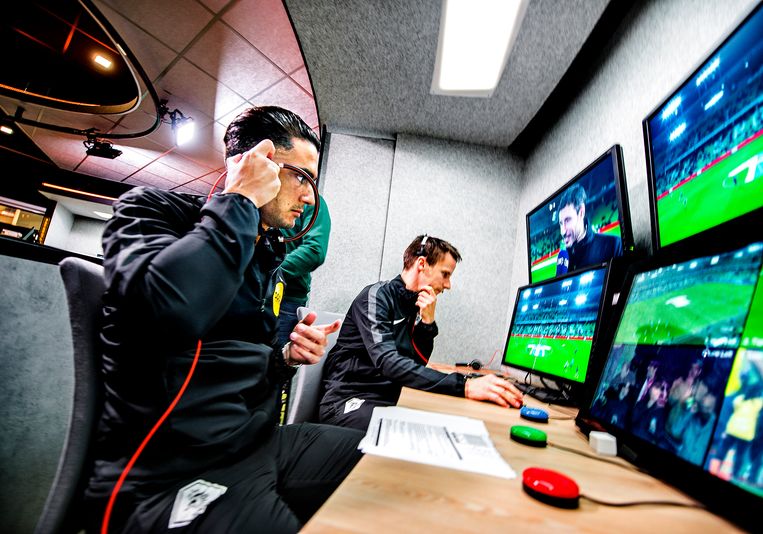 In the VAR center on the KNVB Campus, time will be set back more than a year and a half on Thursday. Screens show that referee Pol van Boekel disapproves of a goal by FC Utrecht player Eljero Elia in December 2020 against AZ. Offside is the verdict. Right or wrong?

“Pay attention and see what happens,” says VAR instructor Robin van ‘t Hof when the fragment is played on the TV screen. ‘What would you do now?’, he asks me when Elia shoots the ball into the goal, but sees that his goal does not go through.

On Friday evening, Heerenveen and Sparta will kick off the new football season. For the fifth year in a row, the Video Assistant Referee (VAR) from Zeist is watching over the referee’s shoulder. Although it is almost impossible to imagine life without video arbitration, it still generates the necessary discussion.

Why did the VAR referee Serdar Gözübüyük not call to the screen at the end of last season when he gave Feyenoord a questionable penalty against PSV, which further clouded the chances of the title? And was it right that referee Edwin van de Graaf rejected Sébastien Haller’s goal during Ajax – Willem II on the advice of the VAR?

Last season, VAR intervened 89 times in 306 games. According to the KNVB’s own figures, the video referee was right in 76 cases. In twenty cases, the VAR wrongly did not intervene, such as with the penalty kick for Feyenoord against PSV, the football association later admitted. Nine times, a wrong intervention by the VAR actually affected the result.

To experience what it is like to act as a video referee, the KNVB welcomed a handful of journalists in the Zeister forests to take a seat behind the screens themselves. The goal by Utrecht player Elia was one of many fragments that passed during the session.

“We had hoped that the video referee would remove all discussion about the arbitration, but that did not work out,” said referee boss Dick van Egmond. ‘The most serious mistakes are removed, but underneath there is a very thick layer of debatable moments that remain debatable.’

Together with a fellow journalist I sit in the circular space behind eight screens. I am the VAR, he the AVAR (assistant VAR). An operator is sitting right next to us. He selects and prepares the fragments that we want to see. Sound from the stadium or the commentator is missing.

Concentrated, we follow the ball that goes from foot to foot of Utrecht players. Until defender Mark van der Maarel gives a deep pass to the sprinting Elia. Even before the attacker has taken the ball, I press the green button on the desk to indicate to the operator that I want to see the fragment again. Offside or not?

The assistant VAR also sounds the alarm, but we forget to follow the rest of the attack, so we are not sure if Elia is taking the ball with his hand. Meanwhile, Van ‘t Hof reminds us that we must keep referee Van Boekel, with whom the VAR is in contact via headphones, informed of what we are doing. “Communication is very important.”

We have the operator put the offside lines very accurately on the screen in front of us. Another tap to the right. No, still a little to the left, we tell him. Then it turns out Elia is not offside and we have to see if the attacker does not make hands when accepting the ball.

I request three camera angles from the operator, while the assistant VAR goes over the entire attack one more time to check that nothing unauthorized has happened there. About 150 situations are checked by the VAR per match. He may intervene in mistaken identity, red cards, penalty kick situations and goals. Some moments take more time than others.

After looking at four camera angles, we’re out: Elia doesn’t make any hands and even in the run-up to Van der Maarel’s long ball, we discover nothing that is unacceptable. Conclusion: Elia’s goal must still be approved. Van ‘t Hof nods and laughs: ‘It took you more than 4.5 minutes. The real VAR took less than 50 seconds at the time, which was acceptable.’

It’s one of the complicating factors for VAR, he says. “For the video referee, a minute feels like ten seconds because he has to check a lot in a short time, while for a waiting referee in a full stadium a minute feels like ten minutes.” Still, quality takes precedence over speed, he emphasizes. According to the KNVB, the matches have taken 1.5 minutes longer since the introduction of the digital tool.

After more than ninety minutes the session is over and I have to take a breather. The more screens and camera angles I have at my disposal, the greater the fear of missing out.

Van Egmond: ‘The VAR removes three quarters of the errors. We would prefer to eliminate all mistakes, but I think after four years we can say that that is not possible.’