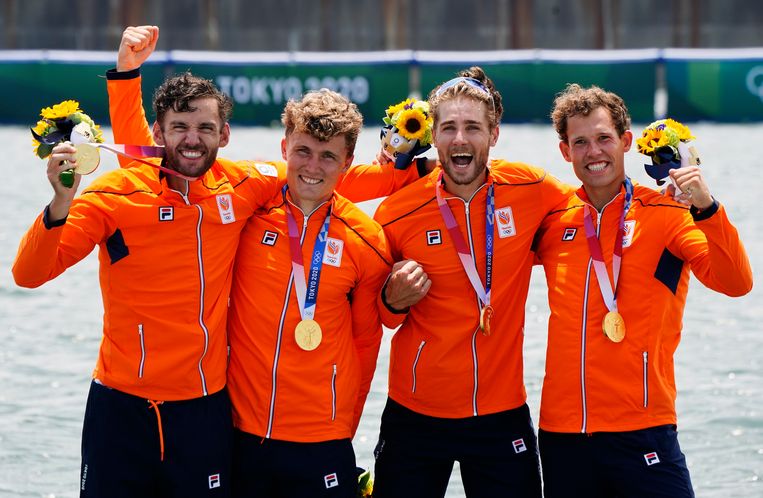 Dinah Washington already sang ‘What a difference a day made’ in 1959. The song should go through the minds of Pieter van den Hoogenband and Maurits Hendriks tonight. On Tuesday, the chef de mission and technical director of the NOCNSF still had to bear responsibility for everything that could and did go wrong towards the Dutch journal.

The Netherlands was one of the hardest hit sports teams at the Olympics in terms of the number of corona infections. The flight that brought the lion’s share of the infected athletes to Tokyo turned out not to be completely corona-proof. The performances of the athletes who remained uncontaminated and were still able to participate in the competitions were disappointing with three silver medals. In the preparation for and communication during the matches, the organization dropped a few mistakes here and there. ‘What are we still doing here?’, a reporter from the NOS asked twice at a hastily scheduled press conference.

‘Twenty-four little hours brought the sun and the flowers where there used to be rain’ (dixit Dinah Washington). The Wednesday that followed, the Dutch squad turned into a historic day. The athletes won no fewer than eight medals, more than a Dutch team ever did in one day. On August 11, 1928, the old record was achieved, when the Dutch athletes won seven medals in front of their own audience in Amsterdam. The comparison with then is actually impossible, since there were a lot fewer medals to be awarded with fourteen sports (compared to 33 now).

But there is no doubt that the Dutch athletes delivered a great performance on Wednesday. In one day, the Netherlands climbed from place 31 to place 10 in the medal standings. “We are not behind schedule, but we are not ahead either. Sport at this level cannot be crammed into schedules,” Van den Hoogenband said at the press conference on Tuesday. An overview of the performances that brought the Dutch Olympic team positively into the news again:

All kinds of medals in cycling

Cheering Annemiek van Vleuten crossed the finish line on Sunday after the road race. ‘The first gold is already in’, the cyclist thought, not knowing that the Austrian underdog Anna Kiesenhofer had already been inside for 45 seconds. The blunder made her accept her silver medal with mixed feelings.

On Tuesday, Van Vleuten (38) got her gram. She proved unbeatable in the time trial. Van Vleuten, for example, won the first Dutch gold medal at these Games. She can toast with teammate Anna van der Breggen tonight, if Japanese rules allow it. He set the third fastest time and took the bronze medal.

‘Van Vleuten only cheers when everyone is inside’, read the extensive report of the women’s time trial here.

There was at least as much euphoria in the time trial for the men. No gold for Tom Dumoulin, but the silver ‘with a golden edge’ got the Dutch cycling enthusiasts on the benches. Earlier this year, Dumoulin stopped cycling because he no longer enjoyed it, now the Dutch team is reaping the benefits of his return.

After his silver medal, Dumoulin knows for sure: he will continue: you can read the complete resurrection of Dumoulin here.

The rowing team had a hard time with three infections. Not only did the infected athletes drop out, the remaining team in Tokyo was also treated as a pariah. It may have fostered the resentment that the Dutch rowers used as fuel on Wednesday. They won no less than four medals.

The second Dutch gold medal of the day came in the name of the men in the double four. Uittenbogaard, Wiersma, Wieten and Metsemakers secured the first men’s rowing title in 25 years. Uittenbogaard rammed teammate Wiersma on the back with joy and slammed his fist into the water. After all the frustration, the gold tasted extra sweet.

The rowers also achieved success in the double sculls. Miel Twellaar and Stef Broenink even seemed to be heading for gold, but had to settle for silver after they were overtaken by the French in the last quarter, who were eventually two tenths of a second faster.

Silver also came in the women’s four without. Ellen Hogerwerf, Karolien Florijn, Ymkje Clevering and Veronique Meester put in an admirable final sprint, but did not get past the Australian quartet.

In the double two race, Lisa Scheenaard and Roos de Jong completed the rowing euphoria. With 6.45.73 they finished behind the golden Romanian team (6.41.03) and New Zealand (6.44.82) to take bronze.

The Netherlands is known as an excellent judo country and Dutch judokas have won many medals at previous Games. This year the yield is a bit disappointing. Sanne van Dijke was one of the favorites in the class up to 70 kilos, but lost to Michaela Polleres from Austria in the semifinals on Wednesday.

In the consolation final, Van Dijke actually no longer felt like it, she told NOS afterwards, but she still managed to recharge. After a grueling match – the extra time lasted no less than 7 minutes and 44 seconds – she defeated the German Scoccimarro with an ippon. The joy was great. ‘This feels like gold’, said Van Dijke. She dedicates the bronze medal to her brother, who took his own life last year.

More success on the way?

There is a good chance that the Netherlands will be able to continue the success on Thursday. Roeisters Paulis and Marieke Keijser will start the light double sculls final at 03:10 am Dutch time. The two are considered favorites for the win.

The Netherlands can also win medals again in judo. Guusje Steenhuis (in the class up to 78 kilos) and Michael Korrel (-100 kilos) compete in the judo temple Budokan. Finally, gymnast Lieke Wevers will be in the final of the all-around from 12.50 pm. Wevers was initially not qualified for the final, but is still allowed to participate because Ellie Black canceled with an ankle injury.