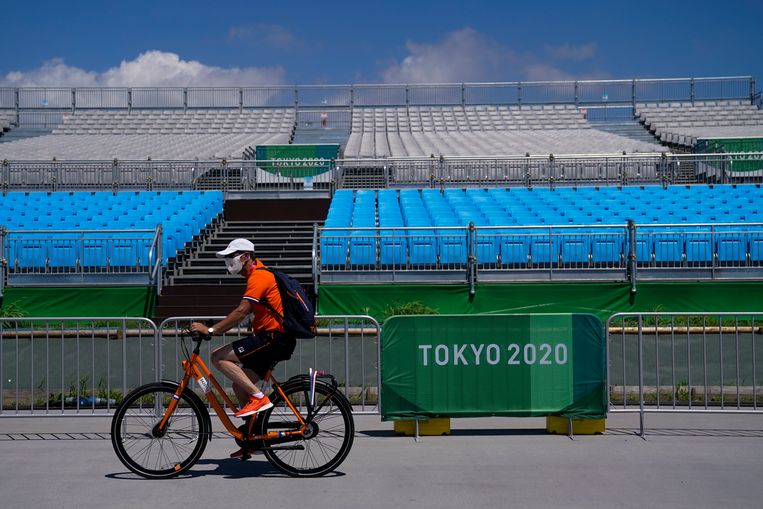 Dorien Hoekstra, team leader sailing team, port Enoshima, hotel Laguna: ‘We were the first. We already left the Netherlands on 4 July. Four people in orange in an entire plane. We had prepared for things to turn out differently. Don’t get excited, we said. It all went fine. The flow at the airport only took eight and a half hours with Jaap Zielhuis, the ‘deputy chef de mission’ according to his map, and Mark Haak, the physiotherapist. The sailors were each time through it in two, two and a half hours.

‘The Japanese who helped and assist us are super nice, benevolent, do their best. My interpreters work hard. The Japanese cooks receive orders from me, which are then translated by the interpreter. It’s all different than we imagined. We had rented our own houses, but we were not allowed to use them. Rejected. It became a hotel in the harbor, two floors, one staircase, no elevator. I had never seen the hotel before. It was plan B. Because plan A was the Olympic village a 45-minute drive away, only for the athletes. The coaches were not allowed to attend. Unworkable of course.

‘We are here with 23 people. No one was allowed on the water before 15 July. Kiran Badloe and Nicholas Heiner therefore arrived late. That was their own idea. Not bad either, because it has rained here continuously from 5 July for six days. And there was no wind. Now the rainy season is over and it has become warm.

‘We have worked hard here. Five containers had to be unloaded. Douwe Broekens and Bart van Roesel had traveled with them, two technical Harry’s. I had limitations, was allowed to be in hotel and harbor and via FaceTime showed the Japanese men the way and what to take from our other places. I wash their eyes, they wash their hands.’

Ad Roskam, team leader athletics team, Chiba, hotel Qube: ‘We have a great location here in Chiba, where they do everything for us. It is really unprecedented how the Japanese are making an effort for us. Yes, there has been a lot of correspondence with Chiba, but the execution is special. We have our own vans. When we get to the track, they already turn the van around, clean it, fill in the route planner. We drive ourselves. Let’s just say against the infections.

’25 of our athletes have arrived, out of a total of 45. There will be another large group on Wednesday. It depends on the submitted Activity Plan, when people are allowed to arrive. That’s how it works at these Games. Sifan Hassan has another training camp at altitude in the US. Susan Krumins does that in Sankt Moritz. We are holding training camp in Chiba for ten days. Three days before the match, the athlete goes to the Olympic Village in Tokyo, then two days to explore the run-in track, check out the stadium and be ready for the match.

‘We have a big team. That’s because the relays are fully booked. That gives the team volume. When sub-top players see that they can reach these tournaments via the relay, they do everything they can. That works. This was also the case with the swimming team in the past.

‘Our hotel deserves a compliment. We’ve sat here before with the athletics team. It has been given a different name and a different owner. The manager is a Dutchman, Rogier Luijnenburg. We got the fifth floor, with a lounge and gym. There is good coffee, very important. The dining room is on the 21st floor. All separate tables, single. The view is outside. Or to the Tokyo skyline and otherwise to Mount Fuji. It doesn’t get much nicer than that.’

André Cats, sports director swimming and water polo team, Chiba, hotel New Otani: ‘This is the land of rules. That makes the stay very complex. After a cautious start, there have been minor easing of security policy. For example, they didn’t want to let us drive ourselves for the first few days. Afraid that we will go with the van in the middle of Chiba’s shopping center, speak out Chiba for Shiba here means dog, would come true. That is a horror scenario in their eyes.

‘After a day or two or three you’ll be like: this itches, all this shit. But this is very important to them. But I say: the risks come from the Japanese. We are here with a 100 percent vaccinated KNZB team that has completed ten PCR tests. The risks don’t come from us. But now it’s fine, we fully respect their view. Not all prefectures (regions, red.) in Japan have continued their invitations to the international sports world. Quite a few Dutch internships have taken place in Chiba.

‘This is perfectly fine. We are in the same hotel where we prepared for the World Cup in South Korea two years ago. We have a swimming pool to ourselves, good accommodation, good food, own transport. We are a five minute drive from the bath. The prefecture of Chiba has made an enormous effort for us Dutch.

‘Our hotel is five star. We eat on the twelfth floor, a long table, segmented per person with plastic screens. View of downtown Tokyo. Purchased two years ago at a very different price than is paid now. That bitter pill has been swallowed. We are here with fourteen swimmers, thirteen water polo players and thirteen guides. Forty in all. Tuesday (today) we move to the Olympic Village in Tokyo. It is a very beautiful village, we saw it during the visit on Sunday. Better than Rio and Beijing. We then train in one of the three pools that are available. The Japanese really avoided the crowds of many swimmers in mixed lanes.’