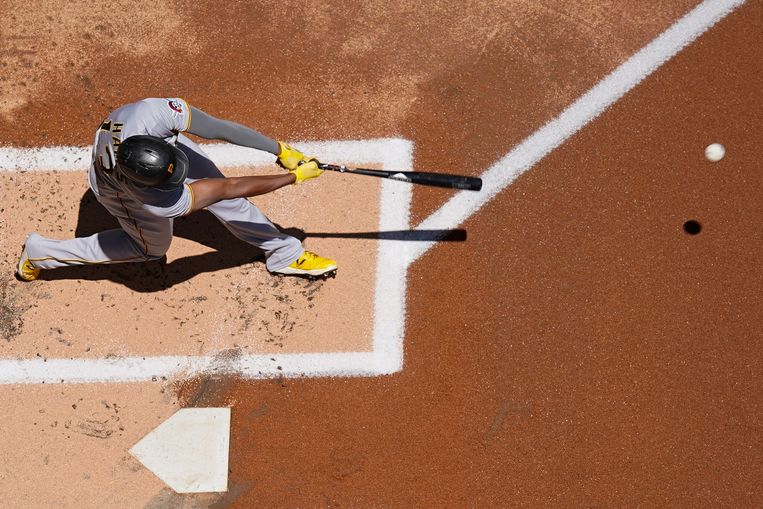 Prying eyes are not welcome in the ‘warroom’ of Pittsburgh Pirates, one of the thirty clubs in the American baseball league MLB. In the space in the PNC Park stadium, dozens of scouts and staff prepare for the annual draft, the process in which clubs select new talents.

Among them are two Dutchmen, Bart Hanegraaff (34) and Martijn Nijhoff (43). They have played a key role at the club for several years and are involved in the selection procedure for the first time as advisors. In the conference room, which has been turned into an impregnable fortress for a while, they are amazed. Even photos are not allowed to leave the room, they say during a break. Competitors could zoom in on the computer screens.

Magnets with names of young baseball players stick on a meter-wide white board. The scouts, spread across the country, have collected information from about two thousand players. Four hundred of these are discussed in the final stage, after they have been arranged by a computer model. Hanegraaff and Nijhoff serve as sounding boards.

Elected players end up in the club’s training teams in the so-called minor leagues, the competitions under the MLB. In the Pittsburgh nursery, the Dutch are in charge.

In the search for a new, different course, the club came across the Brabanders – Hanegraaff comes from Eersel, Nijhoff from Helenaveen – who are given free rein to implement their innovative training methods, which have been tested in the Netherlands. The Pirates, who have to rely on innovation because of their limited budget, think they have gold in their hands with the two.

‘It is unreal’, says Hanegraaff, that two boys from the Netherlands are in control of the fate of a club from baseball mecca America. ‘I sometimes have to pinch myself,’ he says after a long day in the warroom. Nijhoff: ‘We enjoy every day here.’

In Pittsburgh, Pennsylvania, the duo propagate the philosophy of their mentor Frans Bosch. The former artist, who learned about human anatomy as a medical draftsman, has worked as a coach and facilitator in various sports and is influential in the field of motor learning.

Nijhoff, a former baseball player, came into contact with Bosch through the Fontys Sports College and became obsessed with the theory. “My jaw dropped when I heard about it,” he says. “We actually did everything wrong.”

Hanegraaff, who at that time was working for the Nijhoff baseball academy, became acquainted with Bosch and his methods not much later.

‘It is a complex matter’, says Nijhoff, ‘and it can take years to fully understand it’. But the core of the thinking is simple: ‘Instead of telling an athlete how to make a movement, you create an environment in which the body naturally discovers how to do it.’ In his field, it’s called implicit learning: letting you experience, instead of foreshadowing.

A few examples. A pitcher who keeps his arm too low is not simply told what he is doing wrong, but is going to practice with a stick under his arm. If he lands incorrectly on his front foot, the surface can be adjusted to solve the problem in a playful way; using an elevation, for example, or a sand substrate. Batters can perfect their swing by working with heavier or smaller bats.

The approach should allow athletes to rely on automatisms at times of high voltage. Moreover, the more natural way of moving would prevent injuries.

Nijhoff implemented the training methods years ago as a talent coach at the Dutch Baseball and Softball Association (KNBSB), a position he still holds. In Amsterdam he oversees the ‘Talent TeamNL Center’ of the KNBSB, where the greatest talents of the country gather. More often than before they sign professional contracts, or go to American universities. It would underline the success of the approach.

In 2015, Nijhoff gave a lecture in Paderborn, Germany, where his story impressed two Americans who turned out to have a line to Pittsburgh. De Brabander was invited to come and have a look at the club. ‘I wasn’t allowed to say anything, just walk around’, says Nijhoff. “At the end of the day I had to say what I thought.” He didn’t like it. ‘There was no variation in the training, it was just repetition, repetition.’

When he came to visit a second time, nothing had been done with his advice. The third time? The same story. “When they invited me again, I said I’d seen it. I was bored to death. They asked: don’t you learn from us? I said no, not really. They didn’t know what they heard.’

Once back in the Netherlands, the phone rang. The Pirates. Nijhoff was offered a job and became a part-time advisor for the club. He regularly traveled to Bradenton, Florida, where the club’s training complex is located and the training is directed.

Hanegraaff, his protégé in the Netherlands, attended a conference in 2018 for the first time. “We thought there would be a few coaches, but there were 120 people, from 15 different MLB clubs.”

Hanegraaff was enlisted by the Pirates, while other clubs were also interested. The former baseball player received an offer from New York Yankees, among others, but the infamous club was told a rare ‘no’ from the Netherlands. ‘They just buy the best players there,’ says Hanegraaff. “In Pittsburgh, the challenge was greater.”

The baseball coaches write their boys’ book in the city of Andy Warhol, Heinz ketchup and the steel industry. Escaped the war room for a while, they look out from the grass of the PNC Park at the skyscrapers in the center. Nijhoff is wearing a black training jacket (the air conditioning in the office is running at full blast), Hanegraaff is wearing a cap from club legend Roberto Clemente, the Puerto Rican who crashed in 1972 with a plane full of relief supplies for Nicaragua. The large green wall on the right side of the field is named after him.

High in the stadium, a group of supporters is given a tour. They have no idea that the future of their club is largely in the hands of the men down there on the pitch.

Other clubs in the MLB are also familiar with the philosophy of the Dutch to a certain extent, but nowhere is one as ‘all-in’ as in Pittsburgh. Nijhoff’s role, who directs coaches in the minor leagues, was expanded last year – in a six-month period he is in Florida for twelve weeks – and Hanegraaff now lives in Bradenton.

From there he works as ‘head of methodology’ with coaches and players. The intention is that the baseball players of the flagship will also train according to the new method in the near future. Hanegraaff already worked with super talent Oneil Cruz, the Dominican who this season threw a ball to first base with a record speed of 157 kilometers per hour. “When he was first called up by the Pirates last year and he hit his first homerun, I was in the dugout.”

Initially, the newcomers encountered a lot of resistance from their new employer, especially from coaches. ‘I once gave a lecture’, says Nijhoff, ‘and afterwards all the strength and conditioning trainers wanted to resign.’ Hanegraaff: ‘It was all fairly conservative.’

In recent seasons, the staff of the club have been brushed aside: more than 60 percent have been fired. Since then, the Dutch have been given ample opportunity by kindred spirits to fill the vacant positions. ‘First we were the voices in the desert, now they are the coaches who don’t want to come.’

“American baseball is a conservative world,” said John Baker, a former MLB catcher and chief of training in Pittsburgh. ‘That may be due to the large population of the United States: talent will come to the fore anyway. We have become lazy. Jobs are handed out to former players, the training sessions are old-fashioned. All I heard as a player was to keep my elbow up. Classic American baseball advice.’

Baker started his career at Oakland A’s and was hired by Billy Beane, the man behind the data revolution money ball. ‘A lot of people didn’t want to believe that at first either.’

The American was working at Chicago Cubs when he learned about Bosch’s ideas. A fitness trainer had worked with the Dutchman on the Welsh national rugby team. When he started in Pittsburgh last year, his first call was to Hanegraaff. The Dutch no longer had to worry about opposition.

Some employees moved to Pittsburgh because of Hanegraaff and Nijhoff. “I did things because I thought it was the right thing to do,” says Jonathan Tucker, who manages the Pirates’ batting coaches. As a player, he was close to MLB. “I always felt there had to be more.” After a lecture by Nijhoff, a whole new world opened up for him. “With this approach, I probably would have made it to MLB.”

The Pirates, who last won the championship in 1972, are yearning for new success. Nijhoff is convinced that it will come. The first results are now visible. Ke’Bryan Hayes, a talented third baseman from his own academy, signed a contract this spring for $70 million, a club record.

This season, Pittsburgh is once again in the lower echelons, but according to the coaches, the tide will soon turn. ‘If other clubs, viewed in very black and white, only tell how it should be done, never train with variation and at high speed, and we do what we do now in the coming years?… Then you don’t need to know baseball to understand that it will make a difference.’

Within two or three seasons, the supporters can prepare for, at the very least, play-off baseball, Nijhoff thinks. “I’m absolutely convinced of that.”