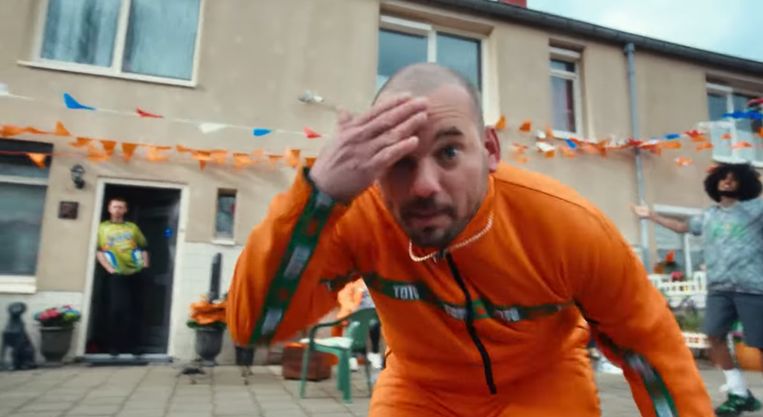 Dutch television commercials are fully committed to the growing Orange sentiment. Which are the best – and the worst?

The streets are slowly turning orange. After seven long Dutch national team football summers, we are back. And that, as Wolter Kroes once so aptly put it, is fine. Talking about Wolter Kroes. He stars in an advertisement for supermarket chain Plus. And, we have to say: it’s not good. That’s the bad news for Wolter Kroes. The good news is, he’s not alone. Perhaps it is all the more noticeable because there were no Orange commercials on television in the past seven summers, but with this year’s average level you almost hope for an early elimination of the Dutch national team.

No, that’s an exaggeration. We just have to get used to it again. There are starring roles for football gods Rafael van der Vaart and Wesley Sneijder, who descended from Olympus, donned camping tuxedos and became what they always were. There are songs, jokes and Snollebollekes. We are really looking forward to the European Championship, really. It’s just not always made easy for us.

Somehow you hope that the day never comes when you see one of the best Dutch football players of the past thirty years in a bright orange tracksuit dancing to the music of Charly Lownoise and Mental Theo. Well, everything went well. In fact, after watching ten times or so, the charm of this extravagant production begins to take hold. But that could also be Stockholm syndrome. ‘King Toto, this is my territory’, raps Wesley Sneijder, ‘I did it with my feet, now with my brain.’ Lots of flashes of light, lots of music, lots of dolls in tracksuits and a guest appearance by Jack van Gelder (ladies and gentlemen). What speaks for Sneijder is that he flies in a tracksuit with a plastic gold crown while looking into a wide-angle lens, with the same bravado that he displayed as a footballer. This time it’s just not the opponents who are left dizzy.

Expiration date: Get through the first game, after that everything is possible

Team Albert Heijn: Everything for Orange

Grootgrutter Albert Heijn is an official partner of the KNVB and that is why (and for that reason alone) Wijnaldum, Blind, van de Beek and Memphis make their appearance in this commercial. The only one missing is Diederik Gommers. It is a melodramatic tale of players in the shadows in the dressing room and very ordinary Dutch people who are looking forward to the European Championship, accompanied by an instrumental version of Hazes’ We love Orange and a roaring speech by Die Madam from Albert Heijn. ‘Finally we have the chance to show ourselves again’, ‘as one team behind our boys’, ‘sing all the way’, that works. The music swells, a choir sings We love Orange and whether we can go get some bitterballen from the Appie.

Summary: Thomas Acda and his neighbor (Sergio IJssel) watch a football game and put on sunglasses because they have never seen orange ‘so bright’. That level, only thirty excruciating seconds longer. They see Rafael van der Vaart in an orange costume holding up a ball and want that outfit too. That’s why they go to Lidl, where they live upstairs. And they still jeer a few Germans, because it is 1992. There is also an addendum of about ten seconds, in which Rafael van der Vaart scares a group of Germans in an orange car and enjoys it immensely. The headband tops it off.

Summary: It’s 2026. Nuclear war has wiped all life off the planet. There is a permanent poisonous orange fog. The only survivor, Mark Rutte, digs a pit in which he hides his phone, in the hope that a future generation will find it. There is one video on the phone. It is the Jumbo advertisement for the European Championship of 2021. There is loud, clumsy music and Frank Lammers is wearing a cape. Hundreds of people dressed in orange (extras? hostages?) dance obediently while Snollebollekes orders them to go left or right. ‘Orange champion’ he shouts. But Orange did not become champion. Orange was disqualified because of this advertisement. The resulting conflict degenerated into a devastating war. The rest is history.

Expiration date Can we still cancel?

Resume That we have to do without arguably the best defender in the world this summer is bad enough, but now we are reminded of his painful absence every commercial break, when Van Dijk opens the door for the pizza delivery. And smiling looks into the box.

Summary: The better work this (relatively then). Marco van Basten, smartly dressed, shows Denzel Dumfries and Davy Klaassen how to drive a ball into the intersection. The next moment they are practicing for the cruise and are waving on a boat, piloted by Wim Kieft, to the empty quays of the Amsterdam canals. ‘Let’s win first,’ says a surprised Frank de Boer. That would be nice indeed.

Expiration date Until just before the cruise.

Team Kruidvat: We Are Orange

Summary: Kruidvat itself was pleased with the recruitment of Hazes for their advertising campaign. “As a folk singer, André Hazes is like no other able to get the Netherlands in the mood for what will undoubtedly be a great summer of football.” Only, the Netherlands did not completely agree with that. After the launch, the negative reactions poured in. “Of course we see the negative reactions,” a spokesperson said in the newspaper AD. “But don’t forget that there are also positive voices.” That’s called false equivalence.

Resume KPN had not counted on Steven Bergwijn not making the selection, because the attacker of Tottenham Hotspur is the radiant center of a sympathetic advertisement in which Frenkie de Jong, Matthijs de Ligt and Steven Berghuis also make a lively appearance. The Orange internationals do various challenges that they receive from their fans via KPN’s network. Shooting a flower pot from a slat, for example. Steven Berghuis eventually succeeds, after which the players enthusiastically fly into each other’s arms. The fact that it’s all staged doesn’t make it any less cheerful.

Team Plus: Build your own EC

Resume Supermarket chain Plus is coming especially for the European Championship with a kind of Lego-like construction kit that you get with every fifteen euros worth of groceries, with which you – well, it doesn’t matter. For the occasion, Wolter Kroes’ Viva Hollandia a 2021 makeover with a beat and a trumpet and a music video and this is just part and parcel of life, but it’s not easy. That version can be heard in the commercial, which ends with a shot of a cheering Wolter Kroes.

Expiration date After Austria it has been nice.

Resume Rapper Donnie and singer Frans Duijts cannot be seen in the Bol.com advertisement. Too bad, because if you do go in, then better with two legs stretched out. Anyway, their song The Lion Dance sounds under an image of someone in a lion suit who is going to pick up a package from his Belgian neighbors. ‘We do the lion dance’, Frans Duijts sings it, ‘we don’t give them a chance.’ Quite contagious, just as covid-19 is contagious.

Expiration date The punishment by Belgium.

Resume Berry van Aerle scratching his ass while peeing, with his mustache framed on the wall of the toilet. What more can you say about that? It is a prelude to the gimmick of beer manufacturer Bavaria: orange pants, in the motif of the shirt from 1988. Happiness, Bavaria says, comes in small pants. Actor Huub Smit is wearing the shorts. Klaas Dijkhoff too. No, not that one. But it could have been.

Expiration date Until all the “in your pants” jokes are made. So summer 2018.

Resume Silver Robin van Persie (et tu?) repeats his legendary dive for tea brand Lipton with an empty bottle of Lipton. At least, he gives the pass. So that makes him more Daley Blind than himself in a way. Incidentally, it is an advertisement for an orange shirt with a cape in the Dutch tricolor and actually liked it quite a bit. But you just hope that there are still people who say ‘no’ to something.

Resume Perhaps the most delusional commercial of all. An employee of electronics store Expert puts ‘Hebbes’ stickers on random items. ‘Expert, the number 1 in electronics is ready for it’ shouts an unfamiliar voice. Then Sari van Veenendaal, goalkeeper of the Dutch national team, walks into the store. She’s got her goalkeeper gloves on, God knows why. Now the Expert employee throws the stickers with Hebbes at Van Veenendaal, who, without acting at all, lets her eyes go left and right and then, without batting an eyelid, catches the stickers from the air, while the unknown voice keeps shouting ‘Hebbes’. . It’s twenty scattered seconds, with no clear beginning or end. This is not an advertisement, this is a video installation.

The KNVB football association has tried in vain to get the European Championship advertising of supermarket chain Jumbo off the television or at least have it adjusted. The union sent a letter to Jumbo, in which it complained about the commercial with the Snollebollekes and the popular ‘cheering cape’ for which supermarket customers can save. In a reaction, Jumbo informed the KNVB that it would leave the campaign as it is. The KNVB has supermarket Albert Heijn as a partner, and therefore has the right to refer directly to Oranje in their advertisements. Jumbo doesn’t have that.