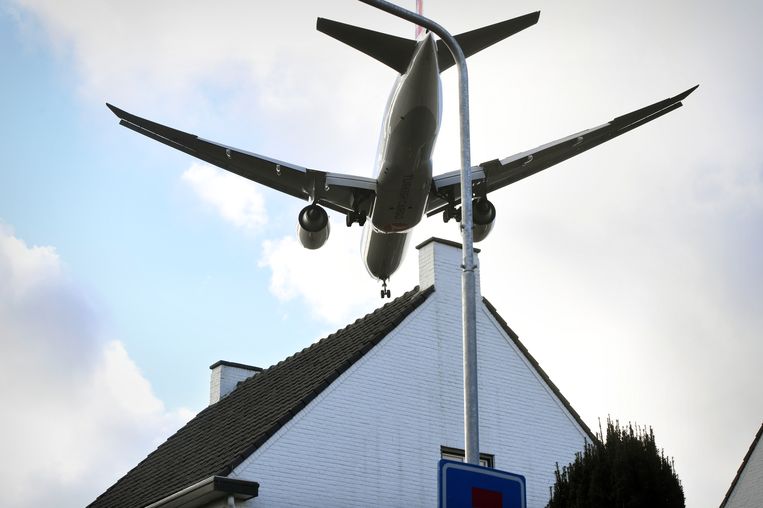 The words “airport” and “detractors” conjure up the image of activists cutting holes in fences and occupying runways. This is not how Tonny (69) and Ger (72) Willems from Geverik are put together. ‘We have been living right next to Maastricht Aachen Airport for forty years. There was always a little inconvenience, “says Tonny,” but we were good neighbors until three years ago. “

What happened? In 2017, the operation of the airport came into the hands of a freight broker with no experience in airport management. Ever since, local residents complain, old, noisy appliances from faraway places have landed in their backyards. “It is unbearable,” says Ger Willems. “When such a large plane comes over, I flee inside.” Willems wonders whether there is a connection between his ailing health and the kerosene fumes in which Geverik is regularly enveloped. The village is hundreds of meters from the runway.

Maastricht Aachen Airport (MAA) – until 1994 called Beek Airport – has been the province of concern for decades. In name it is the fourth airport in the Netherlands, but in size it is a toddler. MAA handled less than half a million passengers in 2019, against almost 72 million at Schiphol, 6.8 million at Eindhoven and 2.1 million in Rotterdam. In the past year of the corona, barely 80,000 travelers arrived.

After Schiphol, it is the only Dutch airport that handles cargo. Maastricht stowed more than 111 thousand tons in 2019. But that contribution is also modest. This concerns 6 percent of the total for the Netherlands. Amsterdam ‘does’ 1.59 million tons.

There has been little or no profit in all those years. Attempts to change that failed. British investor Omniport stepped on board in 2008, but returned the operating license after five years. The freight broker who signed a contract for ten years in 2017 dropped out after two years. In both cases, the province bought back the shares. For 1 euro.

This year there must be a decision about the future. The provincial government continues to dream of a Schiphol on the Maas. This is evident from the assignment with which former CDA politician Pieter van Geel was sent out as a ‘scout’ last year. He has to look at two scenarios. In one, the airport is growing while the nuisance remains the same and in the other the number of people who are seriously annoyed must be halved. This can be done, for example, by insulating surrounding houses. “But then you still can’t sit in the garden,” say opponents.

According to Joost van den Akker, closing is not an option, as deputy responsible for the airport. ‘We don’t want to let that hang over the market either. MAA is doing very well, ‘he said in 2019 at broadcaster 1Limburg. After 60 million euros in tax money has been invested in the airport over the past six years, the VVD member does not want to be the one who turns off the light.

This possibility is discussed in a social cost and benefit analysis (SME), which the Alliance against Expansion Maastricht Aachen Airport presented to the province in mid-December. A motley group of local residents, conservationists and doctors gathered 25,000 euros to have this analysis made, after a proposal to do so in the Provincial Council had died at the last minute.

An SME is very common, but not mandatory for large government investments. It is an outlook that looks beyond the mere economic pluses and minuses. Price tags are also put on the impact on the environment, tourism and public health.

Two Rotterdam research agencies, Neo Observatory and LeoBus.nl, got the job done. Their conclusion: Limburg is better off with a smaller airport, without the holiday charters. It is also possible without freight transport: then only training planes and private jets will land there. These interventions cost jobs, but according to the analysis, the prosperity benefits outweigh the disadvantages. The money saved can go to other investments that generate work. When it is closed, land will be released for, for example, housing or a solar park that supplies electricity to the large chemical industry in South Limburg.

Researcher Rogier Lieshout of SEO Economic Research in Amsterdam has reservations about some of the assumptions made by his Rotterdam colleagues. ‘The positive benefit balance is mainly caused by a decrease in noise pollution and a higher appreciation of visits to nature. The latter is especially remarkable. I have never seen such a relatively large importance of experiencing nature in cost and benefit analyzes. ‘

Lieshout also notes that the negative effects for travelers when the airport is closed are limited. ‘The researchers assume that when passengers can no longer fly from MAA, they will divert to other (larger) airports, which are closer to most of them. You may then ask yourself why they are not opting for those airports now. ‘

The provincial government and the airport management do not want to comment on the content. They want to await Van Geel’s report. The advisor has said he will ‘take’ the alliance SMEs. The former minister should have finished a month ago, but turned out to need more time. The investigation is expected soon.

Which issues does Pieter van Geel encounter in his research?

Anyone viewing a satellite image cannot ignore it. ‘No airport in the Netherlands is so close to built-up areas,’ says Ger Willems in Geverik. He has made films for the people who cannot believe that Boeing 747s are flying low over the village. So low that the roof tiles flew off the roof of neighbor Lou Wanten in 2018. ‘What if they hit someone next time?’ Asks Wanten.

The unfortunate location dates back to 1945, when the Allies advanced to Berlin. The American army cleared nearly 200 hectares of orchard between Beek, Meerssen and Ulestraten for an airstrip. If anyone could have imagined that Boeing 737s would ever land, they would have looked for another place. The soldiers had already left after a month.

In terms of location, there is more wrong than just flying roof tiles. ‘With Eindhoven an hour away and six airports just across the border, the competition is simply too fierce,’ says Walter Manshanden of Neo Observatory. “Freight carriers have it to choose.” For such entrepreneurs, Maastricht is no more favorable than other airports. The airport is not a hub for large air cargo specialists such as Liège or Cologne / Bonn. Half of all air freight is carried in the baggage hold of passenger aircraft. Plenty of them land at Schiphol and Zaventem, but not at Maastricht.

“Air freight carriers are opportunists who come to the low rates,” says Manshanden. ‘They pack up like that when it is cheaper elsewhere. Maastricht is mainly dependent on the tightness at Schiphol. Then carriers have to divert and other airports come into the picture. ‘ It is a shaky foundation for long-term success.

2 FLYING WITH COR AND DON

Is there bread in passenger flights? The cost and benefit analysis lists the airlines that have tried their luck at Maastricht Aachen Airport in recent years. Price fighters who, like the freight forwarders, are always looking for the lowest rates. Most of them cleaned the record within two years.

The largest of the bunch, Ryanair, started with big promises in 2013, but drastically reduced the number of flights and destinations a year later. Flybe didn’t last even six months in 2014. Vueling and Transavia packed their bags in 2016, Wizz Air disappeared in 2017, Germania in 2019.

Since 2018, Maastricht Aachen Airport has mainly been the airport of ‘Cor en Don’, the pleasant travel buyers from the Corendon commercials. This tour operator lures customers with cheap package tours and ‘free’ parking. The latter by the way, because ‘the parking costs are included in the ticket price’, says researcher Leo Bus.

The travelers who depart from Maastricht provide little to the local economy. “They don’t spend their euros in Beek,” says Bus, “but in Bodrum or Burgas.”

The province counts the airport as one of the basic infrastructure of Limburg, such as roads and waterways. But from that point of view, the airport is a highway that nobody uses. There is not a single company that provides a scheduled service to Maastricht.

Only 34 percent of all passengers traveling from Maastricht to their sunny destination come from Limburg, according to a survey conducted by the airport in 2013.19 percent come from the rest of the Netherlands and 47 percent from neighboring countries. Bus and Manshanden expect that these percentages have not changed much in recent years.

Employment, is that a reason to exist? ‘Freight MAA good for 3,300 jobs’, was the headline The Limburger November 2019 on the authority of Erasmus University. Four months later, the newspaper reported that freight traffic only employs 2,800 people. In October of this year there were only 1,740 left.

In November these were preliminary calculations, says Erasmus; these were adjusted four months later. The second adjustment in October has been enforced by local residents. They did what the university failed to do: counting and calling companies. They even photographed the trucks entering and leaving the airport for eleven weeks. Okay, it’s just a sample. But only three transporters from the region came by all this time.

The local residents discovered that the employment figures were so high because Erasmus looked at all transport companies that are located at the airport based on their zip code. All their jobs were counted as ‘air freight related’. It was not investigated whether these carriers are fully or only partly dependent on the work for the airport.

The university has rectified, but activists filed a complaint last week for violating academic integrity. On its website, MAA continues to state that it is good for ‘3,000 direct and indirect FTEs’. Based on Ecorys research, commissioned by the province, the analysis assumes 1,600 full-time jobs in the region. The recreation entrepreneurs club Recron is not impressed. “With less than 200 direct jobs, MAA employs the same number of staff as three medium-sized hotels,” says regional manager Ivo Gelsing.

The juggling with counts reveals a bigger flaw: the lack of hard figures about the airport. ‘We cannot make decisions like this,’ complained members of the Provincial Council last year The Limburger. ‘A lot of things are incorrect in the report. That does not inspire confidence in this tricky dossier, ‘quotes the Forum for Democracy newspaper. D66 also grumbles: “We need reliable and unambiguous information.”

The authors of the cost and benefit study also identify gaps. Because the airport has changed hands so often, “there are no comparable annual reports available, which can be used to lay a foundation that we can project on the future of MAA.” The researchers have only drawn up an operating account themselves. The airport suffered a loss of nearly 3 million in 2015.

There are other important figures – but the province is overlooking. Hotel stays, holiday homes and camping sites in Limburg generate 1.1 billion euros in tourist expenditure and 40 thousand jobs. That tourism is very well possible without Maastricht Aachen Airport. After all, foreign guests do not come to South Limburg by plane, according to the cost and benefit analysis. The Dutch take the car or the train.

Aviation can chase away those tourists, concludes a study conducted by Breda University on behalf of Visit Zuid-Limburg, Koninklijke Horeca Nederland and Hiswa / Recron. If they have been bothered by the noise, tourists will not come again. The existence of the airport is an image issue, philosophizes Lukas van der Hijden, who runs a bed & breakfast in Bemelen. ‘You don’t buy a fat BMW because it drives better, but as a status symbol. Maastricht Aachen Airport is the province’s big BMW. ‘