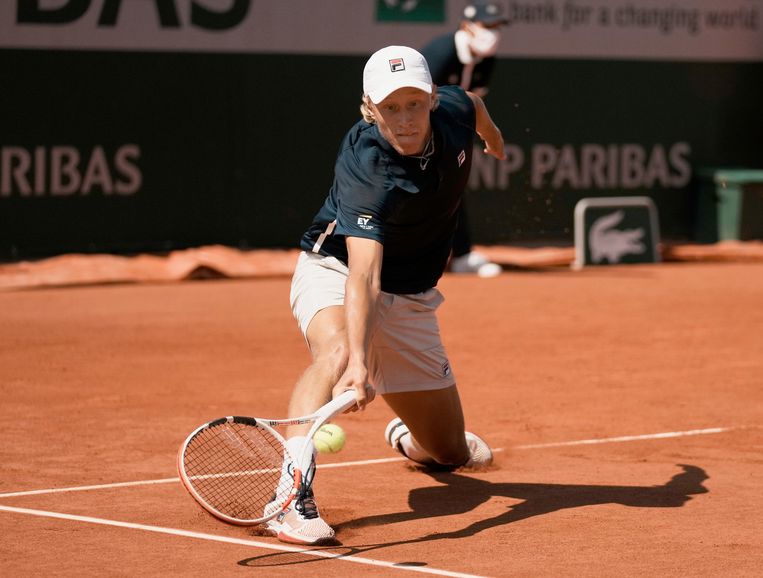 Björn Borg would have liked to have seen his son Leo not play tennis. With every ball he would hit, he would carry his father’s legacy of 11 grand slam titles like a burden. A thought the Swedish tennis legend didn’t feel comfortable with.

On Tuesday, the 18-year-old talent reached the third round of the junior tournament at Roland Garros. At the place where his father won his first grand slam tournament in front of the world at that age in 1974, his son battled in relative anonymity on track nine past the German Max Hans Rehberg.

The physical similarities are striking. As if time has gone back forty years at the Stade Roland Garros, when Borg won his sixth and last title on the gravel of Paris. The blue eyes. The tall and slender build. And the long blond hair. Although son Leo’s do not come out from under the characteristic sweatband, but under a cap.

“My father always told me how great Roland Garros is. Now I can experience it for myself’, Leo said earlier this week amid great interest from the international press. ‘I now know that I get more attention than other guys. I don’t feel any extra pressure because of my last name.’

How different it was until a few years ago. Little Leo wasn’t used to photographers wanting to capture his every move once they realized he was the son of one of tennis’s greatest legends. “Now I have it under control,” said the current number 2,062 of the world ranking. “And that’s a good thing, because I know it will haunt me for the rest of my career.”

Vader Bjorn was known for his hard punches from the baseline. With the double-handed backhand and necessary topspin as a specialty. In the second round at the junior tournament in Paris, his son dictates the second and third set of the match in the same way. So the past is never far away.

A few years ago, he unintentionally got deeper into his father’s skin than he would have liked. When an online advertisement in Sweden called for young acting talent who could also play tennis, mother Patricia did not hesitate for a moment. She had overlooked the fact that it was all about the role of the young Björn Borg in the film Borg vs McEnroe.

Borg senior reacted in despair when he heard that his son from his third marriage had to pretend to be his father. As well as Janus Metz, the film’s director. He initially thought the tennis legend was trying to gain control of the film by involving his son. That doubt was quickly dispelled.

Leo resembled the young version of his father in everything. From the blow with the wooden racket to the expression on his face and angry outbursts on the court. Borg might be known in his heyday as the Iceman who barely showed his emotion. In his youth his hot temper got in the way with some regularity. He threw rackets and could verbally rage.

Borg junior, who is a great example to Nadal, overcame his parents’ doubts and made his debut at a relatively late age this week in a junior grand slam tournament. By comparison, his Italian peers Jannik Sinner and Lorenzo Musetti made it to the fourth round in the main draw. In it they were eliminated by Rafael Nadal and Novak Djokovic.

With the support of father Björn and mother Patricia, Leo walks his own path, although Borg senior leaves the coaching part to his son’s trainers. Once he advised a young Leo that he should play more forward. Much to his son’s dismay. It was the last time he said anything about his game.

The teenager has set himself the goal of “at least” one day being in the top ten of the world rankings. In his pursuit of a place among the best tennis players in the world, he leaves the past behind. He never watched a match of his now 65-year-old father.

After the winning run against Rehberg, a smile broke out on Borg’s face. Not only because he made himself into the last sixteen as a debutant. His father is coming to Paris on Thursday. He then sits in the stands when Borg junior takes on the Chinese Shang Juncheng.