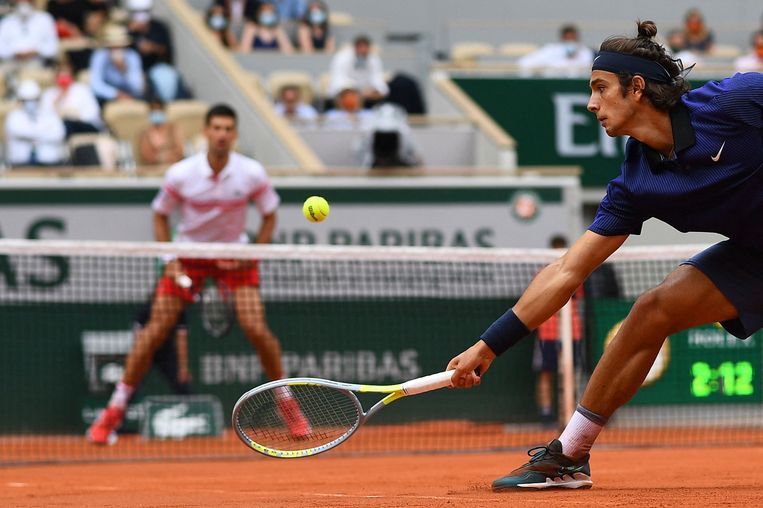 Lorenzo Musetti calls himself the future of tennis. But blinded by the bright prospect, the 19-year-old Italian talent was overtaken by the present in the fourth round at Roland Garros. After a 2-0 lead in sets, the fifteen-year-older Novak Djokovic brought the grand slam debutant back to earth. Disillusioned, he gave up in the fifth set: 6-7 (7), 6-7 (2), 6-1, 6-0, 4-0.

For Djokovic it was the fifth time in his career that he cleared a 2-0 deficit in sets. For a long time, the number one in the world looked uncomfortable with Court Philippe Chatrier. As if he was returning the balls with the handbrake on. It was only after the 34-year-old Serb had gone to the dressing room at the start of the third set that he recovered.

Djokovic fought for over two hours and fifteen minutes against the time yet to come. And then in just over sixty minutes to show the number 76 of the world ranking which way he still has to travel. Suddenly Musetti found himself on the gravel of Paris with an empty tank, after showing perhaps his best tennis in his early career the two sets before.

Djokovic applauded together with the audience when Musetti left the court disappointed after more than 3.5 hours with the tennis bag around his shoulder and head bowed. An illusion poorer, but an experience richer. “Even if I am two sets behind, I know that with my physique and experience I can turn the game around,” said Djokovic.

For a moment it seemed as if Djokovic and Musetti had stepped into a time machine when they entered the renovated tennis arena. Uninhibitedly, Musetti determined the rhythm of the match, while last year’s losing finalist worked tensely, as if he were the debutant at a grand slam tournament. In reality, the 2016 winner is chasing his 19th Grand Slam title in Paris.

Almost endlessly, Djokovic bounced the ball before hitting, although he stayed within the confines of the so-called shot clock. Players are given no more than 25 seconds between two points. It hardly helped him get into his rhythm. In the first two sets, he produced 35 unnecessary errors.

Musetti dictated the game. With his technically perfect one-handed backhand he sent the best tennis player of the moment into the corners. Djokovic defended as the Italian teen attacked fearlessly. Beautiful was the backhand backhand with which he surprised the winner of the Australian Open at the start of the second set.

Musetti has never lost a tiebreak. And also the ninth and tenth decisive game at 6-6 in the first and second set, the Italian managed to win. In the second tiebreak, when trailing 2-0, Djokovic let the ball run casually in the belief that it would go out. The ball landed on the line.

Together with his equally old compatriot Jannik Sinner, who lost to Rafael Nadal later in the day, Musetti had turned out to be the eye-catcher in Paris in the first week. It was the first time in fifteen years that two teenagers reached the fourth round at the most prestigious clay court tournament. In 2006 the young Djokovic and Gael Monfils joined the last sixteen.

Djokovic lost once before to a player lower in the world ranking than Musetti. In 2017, he was surprised in the second round of the Australian Open by Denis Istomin, the Uzbek world number 117 at the time. The mentally strong Serb did not let it get that far.

Musetti got more and more difficult in the third set, while Djokovic thawed quickly. He broke the Italian immediately and fought his way back into the game. It was the beginning of Musetti’s total collapse. For two sets he had imagined himself on a pink cloud, resulting in the sobering fall.

Djokovic won 28 out of 30 points from the 3-1 in the third set to the 4-0 lead in games in the fourth set. Musetti only managed to take four points in the fourth set, as proof of the unprecedented decline. With a painful groin, he gave up when trailing 4-0 in the fifth set.

Djokovic will face Musetti’s compatriot Matteo Berrettini in the quarterfinals. The Italian number eight in the world was given a free passage to the last eight, because Roger Federer, who returned from injury, withdrew on Sunday as a precaution.