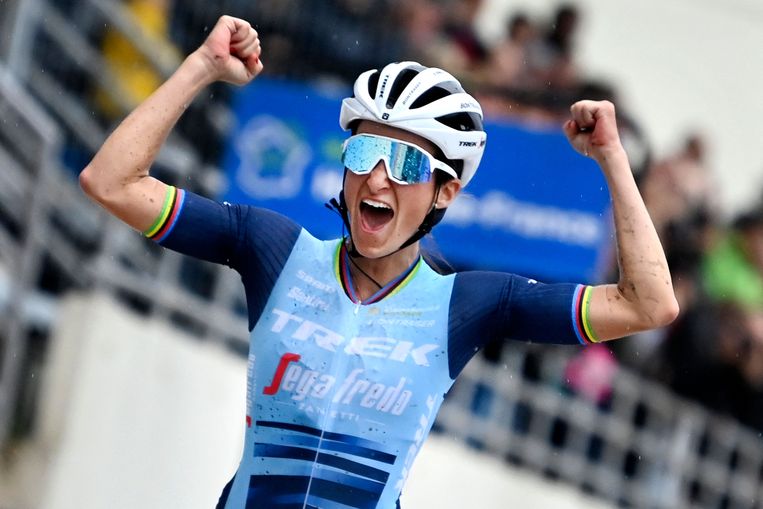 These are the faces of the Hell of the North. Exhausted riders sit on the grass in the middle area of ​​the André Pétrieux velodrome on Saturday afternoon after the first women’s edition of Paris-Roubaix in a drop of rain and shake their heads. This never again. Others report the hardships with their bicycle still between their legs amid teammates.

Listen to Marjolein van ‘t Faith (25), from the small British cycling team Drops-le-Col. She crossed the line of the concrete velodrome in 13th place; in much less demanding competitions she regularly falls outside the top 20. She only has mud splashes on the legs, the uniform and the face. ‘This is my match. I dreamed about this every night. I can just drive it over cobblestones. I fell, I had a cramp, but I’m just not here to solve. I am so happy to have shown that I have taken another step to the top.’

Next to her is Ellen van Dijk (34). She’s in great shape. Last month she became world champion time trial and European champion on the road. Now she’s smeared, battered. She’s covered in thick layers of sludge. In between, on arms and legs, blood shimmers. After previous tumbles in the race, she had crashed hard on the muddy Camphin-en-Pévèle, full on her shoulder and pelvis. Luxembourg’s Christine Majerus clapped over her. Van Dijk complains of a headache, she occasionally feels that she is disappearing. ‘I don’t know exactly what happened. I suddenly slipped away. My bike was also broken. I didn’t even know if I should continue cycling. I’m going to take care of myself first.’

But euphoric or groggy, both have contributed to a new chapter in cycling history with their participation. The weather gods also served the peloton with only debutants in this race the classic version of the race: wet, slippery, muddy, windy, although the feared downpours did not come. Revealing: of the 132 riders, 61 were listed in the results. The rest gave up or came in out of time.

British Trek Segafredo’s Lizzy Deignan (32) won. On the very first cobblestone section, 82 kilometers from the finish, the 2015 world champion had started a solo. Behind her, an organized hunt just didn’t get under way. Marianne Vos broke away from a group of contenders on the Camphin-en-Pévèle – after her acceleration Van Dijk smashed on the cobblestones – but she didn’t come any closer than 1.15 minutes. At the moment that Deignan triumphed over the last meters, she turned onto the track. She pushed again. The difference was 1.17. She gave everything, she says afterwards. “She kept going and I kept hanging.”

It was not even the intention that Deignan went on an adventure alone. “At the end of the strip, I looked back and saw that I had a hole. I drove at 75 percent, the team management said I should give 100 percent now.’
Those who ride alone have the advantage that you can decide for yourself where you cycle. Deignan chose the back of the strip almost everywhere. That is where the boulders are most in line, there it dries up first, sludge collects on the side. Yet she still almost crashed, despite the low pressure (2.3 bar) in the tires. She drifted to the left and in a somewhat brusque attempt to rectify that, her bicycle almost came to a halt. She remembered the advice of teammate Lucinda Brand, cyclocross world champion. ‘She had said: keep kicking, keep kicking!’ When she heard that Fox was on his way, she squeezed it again. “She had much fresher legs than I did.”

Whoever finishes on the podium has little reason to detest the competition. Deignan: ‘This is an iconic race. This is a big step forward for the women.’ The fact that the prize money for the winner amounts to 1535 euros, against 30,000 for the best in the men’s competition, does not really bother her. With the support of the sponsors, her team makes up for the difference. ‘Of course that distinction is disappointing. We’re not there yet. But we are no longer silent either.’ Vos: ‘The mud and the rain only made it more epic. We had to wait a long time for it, but it was great to be a part of it.” The Italian Elisa Longo Borghini (29), teammate of Deignan, third at 1.17: ‘I would do it again in a heartbeat. Paris-Roubaix is ​​chaos. I say: embrace the chaos, embrace the unknown.’

Half an hour after the race, Ellen van Dijk stumbles to the showers of the velodrome, the somewhat dingy cubicles of granite, on which the name plates of all the winners are screwed. She does not want to be deprived of this immersion. Anyone who has participated in such a historic Paris-Roubaix must have completed the entire route.