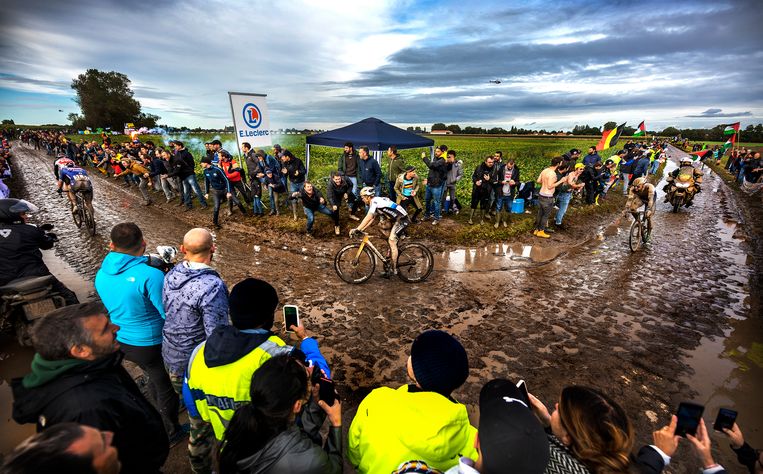 He had hoped to be the freshest of the leading trio after a grueling course over slippery cobblestones. But Mathieu van der Poel had to settle for third place in his debut in Paris-Roubaix. Still, satisfaction prevailed. “If I have to lose, I’d rather go down fighting.”

He still tries, Mathieu van der Poel (26), when he enters the cycling track of Roubaix for the first time in his life, after 257 grueling kilometers in the Hell of the North, in the rain, through the mud, over smeared cobblestones. But when he starts to answer the attack of the Belgian Florian Vermeersch (22), it turns out that the journey through hell has swallowed the last bits of gunpowder in the thighs.

He approaches, but not fast enough and sees how the Italian Sonny Colbrelli (31), reigning European champion and just like him new to the race, takes the victory right in front of him in the classic that he would most like to have on his honors list in his career. to have. Even Vermeersch, even a debutant, stays ahead of him. Van der Poel: ‘I had hoped that I was the least devastated of the three of us in the sprint, but apparently I was the most devastated of all.’

He steers off the track, drops off his bike and lies on his stomach in the grass for minutes. Then he scrambles to his feet and strode to the tent where numbers one, two, and three are being refreshed for the tribute ceremony. It looks like he’s already dealt with the disappointment. “I’m glad I was able to race the way I wanted, in the attack. If I have to lose, I prefer to go down fighting. I am proud to be on the podium.’

The sprint of the dying swans is the blistering apotheosis of the first soggy Paris-Roubaix since 2002. sectors pavé the cobblestones completely submerged in mud water and sludge. On social media, ominous photos passed by early in the morning, on which the riders were wished a safe journey and were advised to bring diving masks and snorkels. Dylan van Baarle said that he had the idea that he was going to cycle through a ditch.

The predicted total apocalypse is not forthcoming. Of course there are falls, as in every Paris-Roubaix there are many falls. Riders crash straight away, both on the cobblestones and on the tarmac, and colleagues riding behind them go with them. Massive tumbles do not occur, also because the field is pulled apart at an early stage and the riders often continue to ride right behind each other on the scarce track that is still somewhat passable. It will be a battlefield, with 81 of the 175 riders not making it to Roubaix or arriving too late. The fact that the participants gradually assume the guise of frontline soldiers from the First World War through the mud, contributes to the idea of ​​a war theater. In the afternoon, with actually some sun, the goo dries up on the face in crusts, intersected by traces of snot and spit.

There had been doubts about Van der Poel’s condition, about the seriousness of his back problems. At the World Cup last Sunday in Leuven, he had to reconcile with a supporting role. But this Sunday, among the favorites, he turns out to be the great animator to find groups and groups that have left early. He accelerates for the first time in the Forest of Wallers. Not long afterwards he shows how great his urge to act is. At 74 kilometers from the finish, he switches bikes. At 71 kilometers he rejoins contenders such as Wout van Aert, Yves Lampaert and Zdenek Stybar. One kilometer later, another attack follows, on the Tilloy à Sars-et-Rosières. It is the place where Van Aert cs have to fit.

He starts sweeping up the escapees, most of whom are happy to leave the head work to the Dutchman. Colbrelli was one of them. He only had one tactic, says the winner afterwards: to follow Van der Poel. It tries to shake off the competition. Especially in the bends he always manages to take some distance, as a world champion in cyclo-cross he has a surplus of cycling skills. But always someone clings to it. Colbrelli and Vermeersch are the last survivors.

Van der Poel had said it in advance: in such a race, with these conditions, you also need some luck. It also falls his way this day. The only escapee that the three of them just can’t catch is the Italian Gianni Moscon. Only after the Ineos Grenadiers rider gets a flat tire and crashes not much later, the gap is bridged. Behind them, on the cobblestone section of Camphin-en-Pévèle, a motorbike bounces into the verge and the group with Van Aert, who is currently regaining ground, is held up.

It is not only Van der Poel who falls to the ground on the track. Florian Vermeersch bursts into tears while sitting. He was in a group that had already left after 40 kilometers. Kramp had played tricks on him in the final meters on the velodrome. ‘Disappointment prevails. Maybe in a few hours I can be proud of it.’ Colbrelli shouts his triumph on his back on the ground. ‘It was a dream to win a monument once. This is my year.’

Ahead, someone else is sitting very disappointed on the grass. It is Nils Eekhoff, 23 years old, employed by Team DSM. He is 44th, at 12.24 from Colbrelli. He drove dozens of kilometers with another in the lead. He is now on the podium, it is Vermeersch. When Eekhoff is standing again, he has trouble opening his eyes, they are almost hidden behind the dried crusts. He’s talking, yes. He had to vomit on the way, he was sidelined with diarrhea. ‘I didn’t feel great and that just built up. This feels like a missed opportunity. I could have stood there.’ He is happy to be there again next April. With one note: ‘It doesn’t have to be like this every year.’