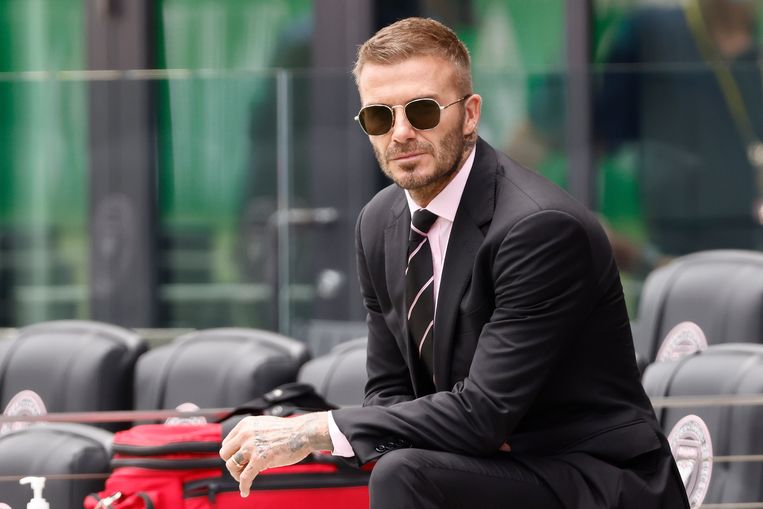 It took years for the project to get off the ground, but with Inter Miami CF David Beckham finally got his own American football club. Things are not going smoothly in Florida, where the newcomer is struggling with serious childhood illnesses. In its second season in Major League Soccer (MLS), Beckham’s club dangles at the bottom of the American soccer league rankings.

In Miami, however, people think big. “We’re overambitious,” Jorge Mas, a local Cuban-American businessman Beckham partnered with, said earlier this season. The club spends the most money on salaries, brought players like Gonzalo Higuain and Blaise Matuidi from Juventus and has plans for a multi-purpose stadium that should cost a billion.

Earlier this month, the club appeared to be one of the candidates to sign Lionel Messi. The Argentinian was on vacation in Miami, was cheered by local football fans and, it leaked out, had bought two new apartments in the city. In the end, Messi chose the star ensemble of Paris Saint-Germain instead of the basement of the MLS. “That’s the caliber of player we want to attract,” Beckham, 45, had previously said.

The British football icon had to be patient in realizing his dream. As early as 2014, he and a group of investors announced the arrival of a football club in Miami. As a player for Los Angeles Galaxy, where he played five seasons from 2007, he had it included in his contract that he could add a new club to the American league for $ 25 million, a relative bargain.

Beckham chose Miami, the glamorous city that suited him, but it would take more than six years for the project to materialize.

Bad off the starting blocks

It was often in doubt, as Beckham is said to have considered selling his share. Finding a location for a stadium in the city – a requirement of the MLS – has long proved a stumbling block. The new Freedom Park to be built near Miami Airport has still not been officially announced.

For now, the club plays its games in Fort Lauderdale, a 45-minute drive north of Miami. The minimalist stadium in the club colors pink, white and black was built in nine months. ‘Your fútbol is here’ reads a sign above the main entrance. The city has a large Latin American population, which the marketing department of Inter Miami focuses on.

The club got off to a flying start in its debut season last year. Inter Miami was only on the road for a few games when the coronavirus shut down MLS. At the resumption in August, the difficult start was continued. Beckham’s club is the first newcomer in MLS history to lose its first five games.

Miami still made it to the playoffs, but was knocked out in the first round by modest Nashville, also new to the MLS. It cost Uruguayan coach Diego Alonso his job. Beckham’s friend Phil Neville succeeded him.

During the cursed corona year, Beckham watched the performances of his club from England. He is now pulling the strings more emphatically from the very expensive club complex in Fort Lauderdale. He is there every day.

According to insiders, the famous ex-footballer is an amiable owner who has a chat for everyone. “He’s David Beckham from Essex,” Neville told ESPN. “This man shows the same respect for the equipment man as he does for Gonzalo Higuaín.”

In Miami, Beckham is primarily responsible for his club’s football affairs, from the youth academy to the first team. At his insistence, a change of course would have taken place. The club initially wanted to focus on young talents from Latin America, but opted for a different approach by attracting the older Higuaín and Matuidi. Dutchmen Kelvin Leerdam and Nick Marsman were also met.

The results have improved somewhat in recent weeks, but Inter Miami is still far from a play-off spot. In the east, only the FC Cincinnati of Jaap Stam and Toronto FC are doing worse.

Recently, the club was criticized for cheating to stay below the mandatory salary cap. Matuidi’s transfer went wrong, who was paid more than the club’s accountants had indicated. The result was a $2 million fine, a significant blow to Beckham and his associates. Expensive players cannot simply be attracted in the coming seasons.

Beckham nevertheless continues to believe in the potential of his club, which includes its location and has a charismatic banner with the Englishman. It will come as no surprise if Club Internacional de Fútbol Miami, as its official name is, will lead the way in the American football league in the future. Beckham himself already thinks bigger. “I don’t think there is a club in the world with more potential than ours.”