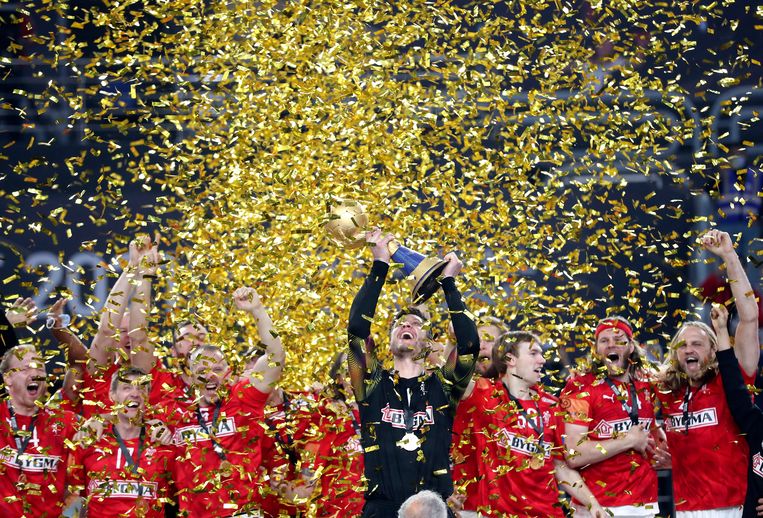 In 2019, the Danes in-house, a packed Jyske Boxen in the provincial town of Herning, became world champion by refusing Norway with no less than 31-22. This year, another Scandinavian country team was in the final battle of the world title battle. Sweden turned it into an exciting World Cup final in Cairo, which was decided in Danish favor, with goalkeeper Niklas Landin in the lead.

The goalie of European club champion THW Kiel, now 32, stopped fourteen Swedish shots and was decisive in the final phase, despite a ball in the face. Denmark won 26-24. Mikkel Hansen, the Paris Saint-Germain superstar, who has taken his national team by the hand for years, was the top scorer of the final with seven goals.

Hansen feared the continuation of his tournament on Wednesday. In the quarter-final against host country Egypt, one of the craziest handball matches in World Cup history, the Dane made a stupid foul for his country in the last second in the win position. He threw the ball away. Serious spoilage, judged the Spanish referees and they gave Hansen the red card and a penalty throw from the weighty 30-second rule. Egypt made it to the extension.

After two extra times, 1 hour 19 minutes and 59 seconds of handball, Egypt appeared to have forced entry into the semi-finals. In that final second, El Masry did not take the legal distance of three meters with a failed Danish free throw (which sailed over). He even stepped up to the Danish opponent. Examination of the VAR images made that Masry got red and Denmark the associated penalty throw that Magnus Landin, the brother of goalkeeper Niklas, hit through the inside post.

The subsequent series of penalty throws, five for each team, were in Danish favor, as goalkeeper Landin parried two. Denmark then faced outsider Sweden in the final via European champions Spain. Sweden, too strong for four-time title holder France in the semi-finals, was world champion for the last time in 1999, not coincidentally also in Egypt. That was a summer tournament with spectator records, where the Pharaohs earned their nickname and attracted 25,000 spectators to the stadium per match. At the time, Russia was too strong in the quarterfinals. Denmark finished ninth in that World Cup.

The latest edition of the World Cup battle, through corona without a tribune occupation, once again lifted Denmark to the highest step and pushed the long-standing ruler Russia, under the name RHF (Russian Handball Federation), even further down: fourteenth. Handball is increasingly becoming a Scandinavian affair.