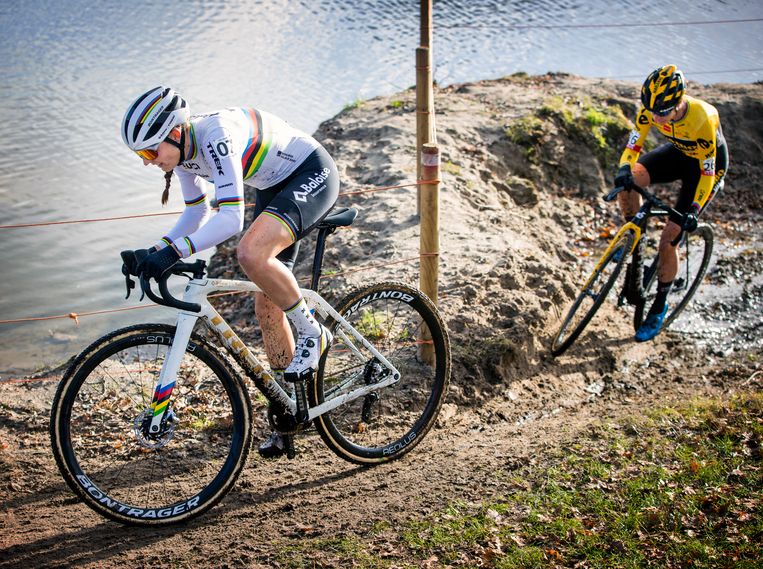 Less than a hundred meters long was the meanest part of the course in Rucphen in Brabant on which Marianne Vos won her seventh national title in cyclo-cross. It was the sloping side of a grass and sand-covered dike where technique and guts were demanded of the cyclocross riders. The bicycle wanted to slide down the slope sideways, the riders had to go straight.

At the bottom was an easy path, but ambitious cyclo-cross riders rode as high as possible on the dike, although there was no trace there. Cycling at the top had the advantage that, if they turned the handlebars to the right at the end of the dike, the riders could drive down the slope at full speed to continue their way.

The sun shone in Rucphen, although there was always a threat of a shower. A cold wind increased the difficulty of the mostly dry, technically challenging course with few runs. To limit the program of the Dutch Championships in connection with the corona measures, the promises (younger than 23 years old) and the elite riders each competed in one race without an audience.

The differences between the two categories were especially apparent in the section on the bevel. The experienced and seasoned pros pedaled hard on the sides of their tires without hesitation, always correcting with the handlebars or a foot on the ground. Then came the youngest riders who audibly and visibly feared the technical challenge. In less than an hour the women completed six laps, which gave them six chances to find the right approach.

It was on the dike where 34-year-old Vos, armed with more experience than any competitor, already made the difference in the second round. The leading group she was part of became fragmented because Denise Betsema lost control on the bevel, fell and caused a traffic jam. As a result, everyone except Vos had to swerve or hold still. It gave her the chance to drive away from the group.

‘Is she there yet’, the national team coach of the cyclocross riders, Gerben de Knegt, shouted, surprised after he had scanned the landscape for Vos’s striking yellow uniform. In a short time she had taken a lead of 20 seconds over Lucinda Brand, the reigning world champion. Vos was surprised himself. ‘Because of the traffic jam with Betsema, I had a small gap. It was still early in the game, but if you decide to go then you have to keep going. With Fire at my back, I couldn’t make mistakes, because we all know Lucinda never gives up.’

Brand was the favorite for the title in Rucphen. After all, she had won no fewer than sixteen international cyclocross races in recent weeks, usually with great force majeure. Incidentally, the international level of cyclo-cross for women is limited: the Dutch riders dominate this season, with regularly a completely orange colored podium.

The 30-year-old Brand had her reasons for rejecting her favorite role. In one of the few matches she did not win, Vos was on the highest step. The location of that cyclo-cross three weeks ago: Rucphen. The organization had left the course exactly the way it was when it became clear that the Dutch National Championships could not be held in Zaltbommel due to the lockdown and was moved to North Brabant. In 2021, the Dutch National Championships did not take place at all.

The gifted Fox won, eleven years after her first national title. Brand was disappointed with her second place. She had fallen several times and blamed herself for making the wrong tactical choice by not immediately responding to Fox’s flight. “I’m going to look it over at home quietly.” Since 2020, reigning Dutch champion Ceylin del Carmen Alvarado (23) came in third. ‘The maximum achievable’, according to her. 19-year-old Fem van Empel finished fourth and won the U23 title.

Eight Dutch women will start at the end of this month in Fayetteville, USA, for the Elite Cyclo-cross World Championships. It cannot be ruled out that all eight of them finish in the top ten. Brand is still the favorite to extend her title, but at least four of her compatriots are considered fellow contenders. After the ‘unofficial World Cup’ on Sunday in Rucphen, Marianne Vos is one of them. If she would succeed Brand in the US, eight years after her last world title, she could wear the rainbow jersey for no less than the eighth time.

Van der Haar wins with force majeure among the men


Lars van der Haar won his third national title in cyclo-cross on Sunday in Rucphen. The 30-year-old reigning European champion succeeds Mathieu van der Poel, who won the last six Dutch Championships. Van der Poel was missing in Rucphen due to a back injury and will no longer be in action this cross season.

Van der Haar, also Dutch champion in 2013 and 2014 and winner of the European title in Drenthe at the end of last year on the VAM mountain, won by a street length ahead of number two Corné van Kessel. Third was Mees Hendrikx, who thus captured the U23 title. ‘I was more nervous than ever before an NK’, said Van der Haar after he had led the entire race alone for an hour. “I felt that I could really only lose here.”

On January 30, he and Van Kessel are the only Dutch cyclocross riders at the start for the World Cup in the US. Just as the Netherlands dominates international cyclo-cross for women, the Belgians do so for men. Wout van Aert won the Belgian championship on Sunday, but he has decided to skip the World Cup this year.