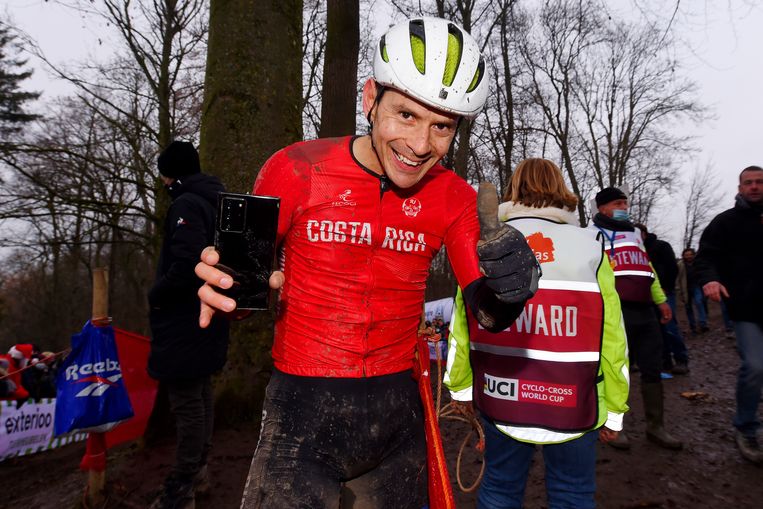 Ten years after his seventh suicide attempt, Felipe Timoteo Nystrom will start this month at the Cyclo-cross World Championships in America. “I want to show that you can take your life into your own hands, no matter what happened to you.”

On September 27, 2012, Felipe Timoteo Nystrom, then 29 years old, knows for sure that he will end his life that day. He begged $100 on the streets of San Jose, the capital of Costa Rica, and bought 20 grams of cocaine and 30 cans of beer. That should be enough. Before moving into a dingy hotel, he steals a polo shirt and trousers from a clothing store. At least then he’ll look a little presentable when they find him later.

A few hours later he finds himself surrounded by nurses. He is furious. Why didn’t they let him go? He cries out of helplessness. It did not work. Again not. This was his seventh attempt. A rescuer does nothing but hold him silently, although he is covered in urine and vomit.

At the end of this month, Nystrom, now 38, will be the first Costa Rican in history to start the UCI Cyclo-cross World Championships in Fayetteville, North Carolina, United States. He’s not doing it for profit. Of course he doesn’t stand a chance. In December he rode a few cyclocross races in Belgium and the Netherlands and stopped prematurely or finished far behind. Participation was at their own expense, although crowdfunding still yielded USD 2800, a fraction of the required budget. Other things than jerseys and trophies count for him.

Adventurers often appear in the cross country, loners from countries without cycling history, riding laps behind. They mainly want to experience something. Nystrom has a mission. He was abused in his youth, was homeless, addicted to drugs and alcohol, and tired of life. He is now an interpreter in Portland, Oregon and soon to be a World Cup participant, on his Trek, which he was able to purchase from a local bike shop thanks to a significant discount.

In a hotel in Brussels, a few days before his return to the United States, Nystrom, small in stature, tells his story – a waterfall of speech, smiling, despite everything. “I want to show that you can take your life into your own hands, no matter what has happened to you, what has been done to you—including those who have been told they are no good, who are cold and hungry.” It’s like he’s checking off what happened to him. ‘It can be done through sport, in a job, with someone you love. No one has the dream of living on the street. Even if there’s only one person who draws inspiration from my story to try and get out, I’ve accomplished something. I don’t even need to know.’

The surname Nystrom comes from his mother, an American with distant ancestors from Sweden. She came to Costa Rica in 1980 for a humanitarian organization. In the jungle, a five-hour journey from San Jose, she devoted herself to the Bri Bri, an indigenous people. She became pregnant, returned to the capital alone and gave birth to Felipe. His father stayed with his tribe. He met them less than a handful of times. The last time was when he was 13.

A difficult life begins for Nystrom in San José. Where his mother energetically throws herself into social projects in the city, according to him she neglects the family – another brother and sister are added, from different fathers. One of them mistreats him. There are babysitters who sexually abuse him. When he tells it, he is not heard. ‘My mother hit me in response. She denied it. I was an ungrateful child. In retrospect, I think it was too confronting: the realization that she had failed as a mother. She sometimes took food off the table to give it away. Then she said: other children need it more than you. Her behavior made me feel like I was worth nothing. If your own mother doesn’t protect you, who will?’

Things are not much better outside the family. He is bullied at a school for expats, where he can go thanks to his mother’s contacts. He’s the poor man from Costa Rica. Later, at a private school, he also fails to make friends. ‘There was a party culture there. I didn’t want to participate in it.’ At university, where he briefly studies law with money he scrapes together with strawberry and coffee picking, he remains a loner. ‘I was by far the youngest in that study. Many Costa Ricans don’t start studying until they’re over thirty, after working for years to save.’ A roar of laughter: ‘I was so small, I couldn’t even reach the urinals.’

Sport is his safe haven. Everything is better than at home. He plays football at Club Sport Herediano in the Costa Rican city of Heredia. Feyenoord is his first favorite club (‘That shirt!’), later it is Real Madrid, ‘the Madrid before Ronaldo’. He prefers to see Claude Makélélé and Clarence Seedorf. Central midfielders, just like him. He runs fast. He cycles, on an old mountain bike. He does gymnastics and cleans the hall in the evening.

The derailment starts with his first permanent position. He becomes an employee at a betting office. ‘That went from party to party there. I remember the first time I was drunk. I danced on a table in the cafe. I took off my shirt. Everyone cheered. They grabbed me.’ He is accepted. He finally belongs somewhere. After the drink come the pills, after the pills the cocaine, despite a colleague’s warning that coke first embraces you lovingly, doesn’t let go and then strangles you.

A friend – ‘she used even more than me’ – surprises him a few months after the breakup with the announcement that she is pregnant. After the birth, he goes to the hospital. A DNA test must show whether the baby is his. He walks to the incubator. He puts his hand in and little Mathias reflexively closes his fingers around his little finger. ‘I took a good look at him and said, ‘Don’t take that test. He’s mine.’

It does not lead to the insight that things have to be done differently. He is increasingly absent on the days when he has to babysit his son. He needs more and more cocaine. Mathias disappears from his life. It only makes his sense of failure stronger. ‘I felt guilty. I wasn’t worth living.’ He roams the street. He fights with others at fast food restaurants at night over hamburger and chicken nuggets leftovers in the trash cans. ‘At that time I no longer dared to look at myself in mirrors or shop windows.’

When he wakes up in a hospital bed that September after his seventh overdose, he hears a heartbreaking cry next to him. A woman and a sister have just learned that their loved one didn’t make it. He was seriously injured in a shooting. They had been there, were covered in blood themselves. ‘The funny thing was: suddenly a calm came over me. All the gorillas on my back were gone. I told myself: OK, do you want to end up like this? Is this it then? Or is there something else possible?’ A day later, he walks 12.13 kilometers and rattles the fence of a rehab clinic. ‘Since then I haven’t drunk a drop, haven’t snorted a gram. Not yet, I always say. Never say you’re already there. That keeps you alert every day.’

He exchanges San José for Portland in the US state of Oregon. A friend he met at the clinic was from there. He went with them, but it didn’t work out between them. He decides to return, but the night before leaving, the phone rings. ‘I had applied myself drowsy. I was perfectly bilingual, a job as a translator seemed like a good idea. I never heard anything. Until then. I could start, but immediately. Whether I wanted to go to a hospital where a 19-year-old mother had lost her baby. It was dramatic, intensely sad. I had to explain what had happened. But for me it was also beautiful. I was needed. I had something to offer. The mother thanked me. I had finally been of value. I was already 30.’ He gets the job. In the meantime, he also acts as an interpreter in court cases.

Again he seeks diversion in sport, this time not as an escape but as a vehicle to show his son, with whom he has sporadic contact again, that he can indeed do something. First the triathlon, but you can’t get used to swimming in cold water. ‘I couldn’t stand it even in swimming pools’. His coach advises to focus on cycling. ‘Cycling has parallels with addiction. You always want more. Train even harder, make more miles, even better gear. Also: if the body says ‘Ho!’ calls, you just go ahead.’

For him, the cross means first training for races on the road. Cyclocross is relatively popular in the northwest of the US. There is also discussion about who is actually the best, Wout van Aert or Mathieu van der Poel. His goal: to compete in the national road championship in Costa Rica. In 2019 he will start without expectations. A friend is chasing the pack in the back of a car with Nystrom’s son. They agree that if he has to unload, he will board with them to go to the beach together. Things are different. Nystrom wins. He is the strongest in a sprint of a small leading group. “A reporter came up to me and said, ‘Congratulations, you’re a national champion. But, um, who are you?” What really makes it worthwhile is the hug with his son Mathias. He still watches the video regularly.

The victory suddenly gives him a podium on which, dressed in the national colors, he can show that misery can be finite. ‘Until then I was a parasite, doing nothing for his country. Now I can represent that same country.’ Selection for a World Championship on the road is out of the question, because compatriot Andrey Amador drives for the wealthy Ineos Grenadiers, and is much better. But when he sees that cyclo-cross World Cups and the World Cup are being held in the United States, he begs the cycling federation to sign him up. ‘I promised I would do the rest: I paid everything, arranged the insurance, took care of my equipment.’

After much insistence, his wish is granted. It leads to participation in competitions in the US and Europe. Friend Sarah travels along and learns from other teams in the transition zone how to spray the mud off his bike.

The lack of results does not bother him. It just motivates. ‘I’ll be back next year. Maybe then I can join the group.’ It had been an honor to ride with the elite and see the skills.

He is often asked the question: his bruised past is so difficult to reconcile with his energy and optimism of today. The happiest people on the outside are often the saddest on the inside. I’m still aware that every day, every hour, every minute, every second I have to think about what the best next step is. I’ll tell you: this counts.’ He scrolls through messages on his phone and quotes, “You inspired me,” “I want to try the same as you.” Nystrom: ‘I want to answer them all. I’ll tell them they’re worth it.’

Talking about thoughts of suicide is possible at 113 Suicide Prevention. Call 0800-0113 for a conversation. You can also chat at www.113.nl.