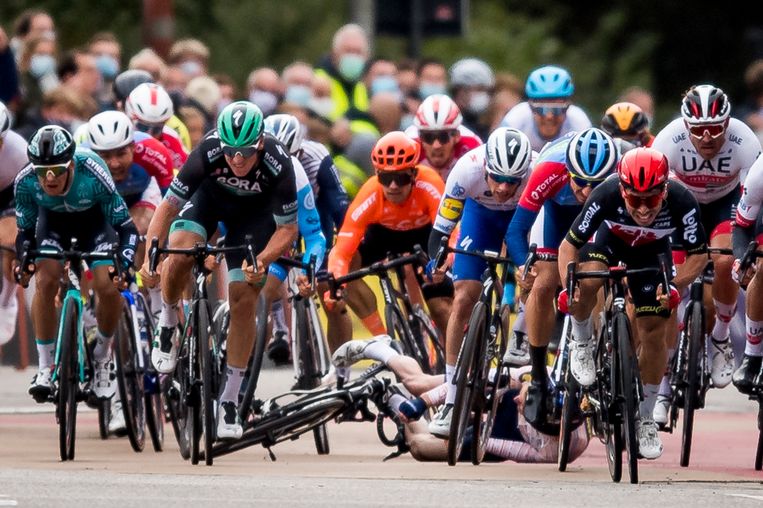 For fifteen years Sebastian Langeveld has been riding as a professional in the cycling peloton and he knows: ‘Cycling is the best thing there is, but it is not a very safe sport.

The rider of the American team Education First is a fan of the Flemish spring, which will have its climax on Sunday with the Tour of Flanders. The kilometer-long cobblestone strips, the steep, short climbs over weathered asphalt and the unpaved paths along places where relentless combat was fought in the First World War: as far as Langeveld is concerned, such recurring sections are part of the heroism of the race. ‘And you know what to expect from every game. The fact that there are many roundabouts in the Amstel Gold Race, for example, is something you can anticipate.

The same applies to Flemish roads covered with concrete slabs. In the middle of the road is a groove – think of tram rails – that exactly fits a racing bicycle tire. ‘We then drive over it at seventy kilometers per hour, hanging in each other, fighting for our position because 160 riders all want to turn the corner at the first ten further on to the narrow road to the Oude Kwaremont. There is no room for that. That often goes well, but sometimes it goes wrong. And then as a cyclist you are extremely vulnerable on that bike. That is why it is not a very safe sport. ‘

Cycling must be safer, says the international cycling union, UCI. From the Swiss headquarters in Aigle, it issued new rules that should also make the course safer from 1 April. Responsible for this will be a safety manager, the Swiss Richard Chassot. And every organizer of a cycling race is obliged to have someone in their ranks who watches over the safety of the riders. A few weeks before the race, this officer must recognize the ‘technical sections’ of the course and consult with the UCI: dangerous or not.

A tool for this is an app that is ‘fed’ with data about incidents, such as falls, from men’s and women’s competitions over the past five years. As far as Chassot is concerned, the responsibility for a safe competition rests entirely with the local organizer. “We can’t control 20,000 kilometers from Aigle.”

Control is nevertheless urgently needed, as the peloton defies many avoidable hazards that add nothing to the charm of the course: gravel or sand and mud fallen off the hiker in the curves of a steep descent; raised manhole covers; unmarked, low traffic fences in the direction of travel; jumping water bottles escaping from their holder; oil traces; missing pavers, and so on.

All easy to solve, says Langeveld. ‘That is a matter of – avant course – sending someone ahead who has the authority to say: this must go, that must go. He sees gravel in a bend and has it swept away. Or he sees oil in a descent and has the authority to partially neutralize the price. ‘

The new UCI rules do go into detail about the position of the cyclist on the bike and the limitation of the risks in the last kilometer and the finish of a race. The sprint accident in Poland in August last year was the catalyst. The Dutch sprinter Fabio Jakobsen was seriously injured at the hands of competitor and fellow countryman Dylan Groenewegen. And because of the choices of the organization, which had set the finish line on a wrong, because descending road, which was also closed off with the wrong fences.

In theory, every cycling race can end with a bunch sprint of dozens of riders who, due to their maximum speed and effort, are unable to anticipate a protruding leg of a fence, a spectator hanging over that fence or a missing piece of fence in the finish street. The French sprinter Nacer Bouhanni proved last Sunday that detailed provisions on this are necessary.

As if he had never heard of Jakobsen and Groenewegen, Bouhanni pushed the Briton Jake Stewart into the gates in the final sprint of the one-day race Cholet-Pays de la Loire. The fence section where it happened had billboards attached to the ground, through which Stewart managed to glide along with pure helmsman’s skill and stay upright. He did break his hand through the collision with the fence at a speed of over sixty kilometers per hour, taking him three weeks out.

However, the damage to Stewart could have been many times greater at the hands of the organization if Bouhanni had started his yet to be punished madman action twenty meters earlier or later.

Had it been earlier, Stewart would have ended up in fences without billboards and bounced off the legs of those fences. Even worse was what the organization had in store for Stewart twenty yards away. There, the gate had already been pushed away like a door at an angle of 90 degrees so that following cars could later leave the finish street. Had the Briton landed in that ‘hole’ in the gate by Bouhanni’s push, he would have hit a transverse gate at full speed.

Five days before the UCI strictly prohibited such a perilous interruption of the finish street, Stewart was spared a fate like Jakobsen’s. But, says the experienced Langeveld, the rider’s vulnerability cannot be eliminated. ‘As long as you ride on public roads, as long as the level is terribly high and as long as the bikes are getting faster and faster, men and women will occasionally lie on the ground. Usually with abrasions, sometimes with much worse consequences. ‘