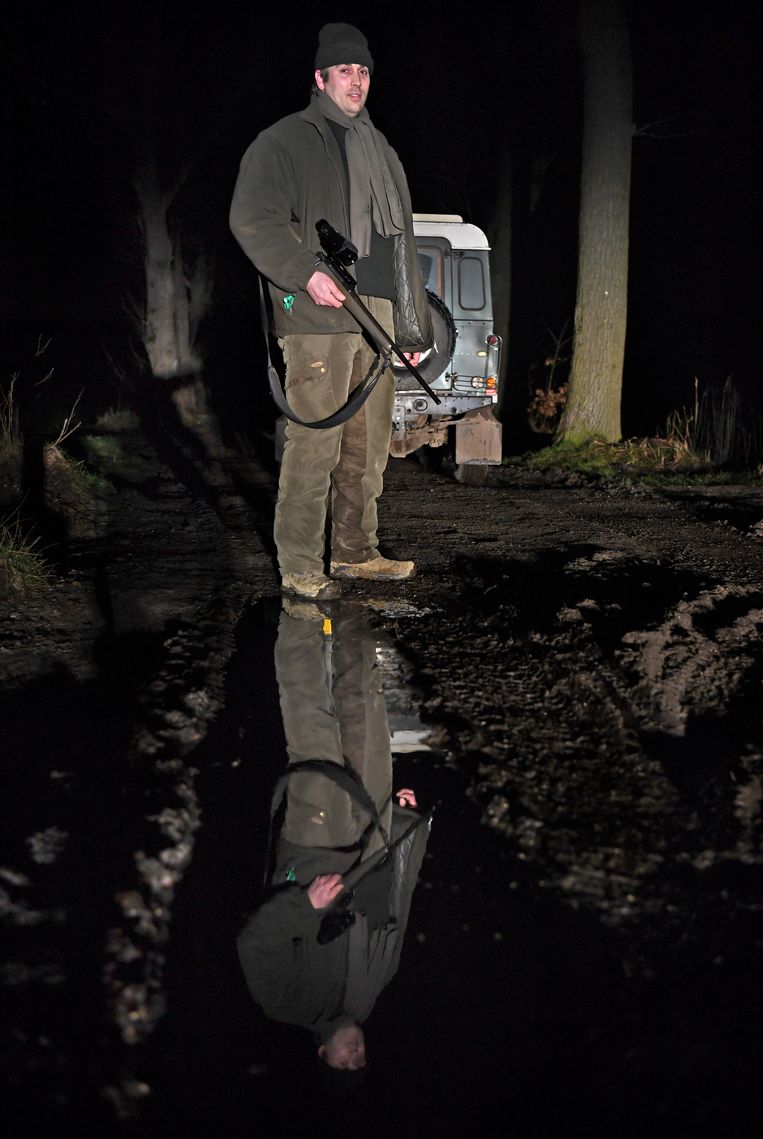 The curfew has already started when Sjors Thissen sneaks through a meadow near Swalmen in Limburg with his Mauser M12 hunting rifle. Peering through his night vision goggles every hundred meters. “Wait, wait, wait,” he whispers. He pauses in the drizzle. His shoes slurp into the swampy ground.

Deer, hare, badger. They light up in the heat finder as white spots on a black background. “Hey, is that a wild boar?” It sounds hopeful. It is this prey for which it defies cold and darkness tonight.

Hunters in several provinces have been exempted from the curfew for wild boar hunting. According to Minister Carola Schouten of Agriculture, they have a nocturnal role to play in the fight against African swine fever (AVP).

The highly contagious virus has decimated China’s pig herd in recent years. After wild infections in Belgium and Germany, this fear image has been living for some time in pig country the Netherlands. Stakes are high, with EUR 3.5 billion in pork exports alone last year.

Belgium was declared clean of ASF at the end of last year, but infected pigs are still roaming around in German forests. To reduce the chance of skipping, attempts are made to keep the population small.

Two years ago hunters were given more powers from the minister. She allowed the so-called movement hunting of wild boars, where floats move the animals in the direction of the hunters. Due to the risk of disturbance to nature, this is normally not allowed.

At the time, there was fierce criticism from animal and nature organizations, and that is now also the case with the curfew exemption. ‘Hunters put forward fallacies in order not to have to give up their hobby’, Stichting Dier & Recht writes in an urgent letter. A petition has also been drawn up and parliamentary questions have been asked.

Sjors Thissen (35) shrugs his shoulders prior to the night hunt. In his father’s hunting lodge, a wooden shed behind the imposing 17th-century castle farm in Swalmen, Limburg, old guns, photos and trophies hang on the wall. Between deer antlers and boar tusks is the skin of a Canadian bear.

Hunting has been in the blood of the Thissens for three generations. From an early age there was always a shot animal for Sjors to admire in the barn. He went along himself from the age of six.

So of course he is happy that the province of Limburg immediately responded to the evening exemption for his passion. And after a day at the computer, for a company that makes pumping installations for the mining industry, he is allowed to sit outside in the cold under the moon on his own.

Deprivation in the cold

‘The world is different at night,’ he says beaming. ‘The hardship in the cold. The silence interrupted by a tawny owl. While I get to hunt that clever, unpredictable wild boar. That is just very exciting. ‘

He says he is also a man on a mission. He enjoys it when he can help prevent damage to fellow farmers, he says during a short drive to the hunting site. In addition to reducing the risk of swine fever outbreaks, it is also intended to prevent crop damage and the rooting of agricultural land by pigs.

He parks his old Land Rover Defender with the blueberry farmer whose land he is allowed to hunt. “If we relax and do nothing for a while, the boar population will go sky high,” he says. “You won’t make up for that any time soon.”

The wild boar is only ‘wanted’ in three places in the Netherlands. In the Veluwe, in the Limburg National Park de Meinweg and in the small nature reserve Meerlebroek, not far from the castle farm of the Thissen family.

In order to prevent agricultural damage, a so-called zero-stock policy applies to animals in the rest of the country, which means that wild boar may be hunted there without restrictions. Traffic collision avoidance also plays a role.

According to the provincial Fauna Management Units, an average of two-thirds of the 10 to 14 thousand wild boars in the Netherlands are shot annually. Last year there were fewer than in 2019. The Royal Dutch Hunters’ Association attributes this partly to the increased busyness in the forests during the day. A direct result of the lockdowns, which drive people into nature for lack of other entertainment. As a result, the shy wild boars would stay further in the forest, which would make them less likely to end up in front of someone like Thissen.

Frederieke Schouten, veterinarian and director of the Animal & Law Foundation, thinks it’s nonsense. A simple argument to be able to continue with, as she calls it, the ‘enormous slaughter’. She is especially angry about the role of hunters in countering the ASF. According to her, the virus is not a problem from the wild, but a risk that arises ‘because of the pig factories where tens of thousands of pigs live far too close together’.

According to scientists, wild boars do play a role in the spread of the virus that is harmless to humans. Moreover, contamination in the wild can also cause economic damage. For example, German pork was banned in China – also a major buyer in the Netherlands – after a dead wild boar with ASF was found. The Netherlands is therefore not the only country that is taking measures to protect its own pig industry against sick pigs. For example, Denmark placed a fence at the German border in 2019.

Once in the self-built high seat, about 300 meters from the German border, Thissen gestures to the edge of the forest again. “Look, far away, there you see those three dots again,” he whispers enthusiastically. ‘That could be piglets. This is luck; I have to come here twenty times to shoot one wild boar. ‘

But not much later: ‘Sorry for the false hope. They skipped away. Unfortunately, hares. ‘