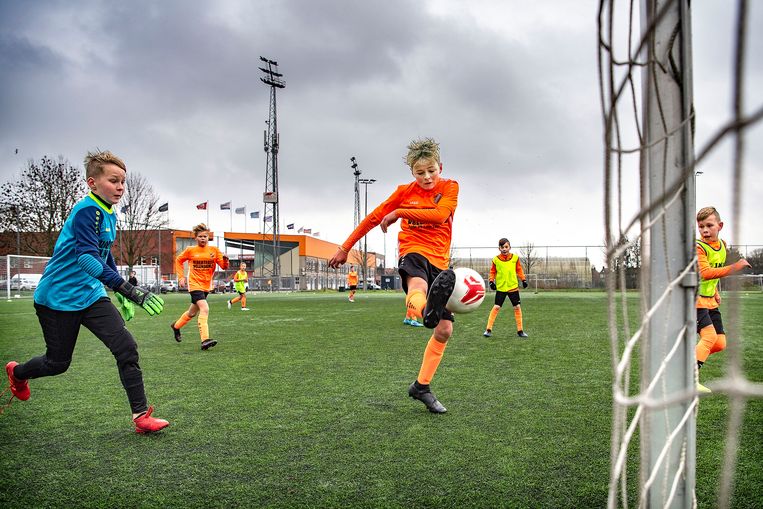 Vapor from showers and heated men’s bodies curls from the windows of the FC Volendam dressing room, mixed with the angry voice of Wim Jonk, after the disappointing 1-1 against TOP Oss on Friday. “If you want to be champions…” Moments later, outside the locker room: “The second half was below any level. That’s why I was so angry. ‘

Jonk, the purist among the followers of Johan Cruijff, has been a trainer in his native village for almost a year and a half. There he wants to show attractive football according to the principles of Cruijff. The former international and club icon, who sees a canvas with his own image hanging from the dug-out: ‘We are inspired by what we have done before at Ajax. We try to convey these thoughts to everyone, with the development of the individual as a starting point, including youth players. You see guys taking incredible steps. Things last. That is beautiful.’

In the first year, ‘Team Jonk’ focused on the first team. Now the entire club has been taken care of, including the amateur club RKAV Volendam on the other side of the symbolic bridge. ‘The philosophy of Cruijff fits seamlessly with Volendam’, says board member Keje Molenaar, former teammate of Cruijff, just like Jonk a faithful follower of the thoughts of the maestro who passed away in 2016.

‘For example, Volendam wants to play football with a team with an average age of about 21 years. Johan always said: professional football is intended for people in the stands and living rooms. We recently won 7-1 against Dordrecht. It could also have been 9-7. That’s what football is all about. I saw De Graafschap play football against Cambuur last week. No idea of ​​football at de Graafschap. Yes, they can reject. ‘

In a way, it is almost a scene from a comic book by Asterix and Obelix, from their village in Gaul that bravely stands up against the advancing Romans. In Volendam, on the shores of the IJsselmeer, where they sing, play football and much more, the Cruijffian vision has been embraced like nowhere else in the Netherlands.

‘Johan has been a source of inspiration for all of us. He still is’, says Michel Hordijk, technique trainer of the first team and technical manager of the older youth. ‘The goal at his return for Ajax against Haarlem in 1981 is one of my first memories, it is an impression that never fades. That was just a different story than any other football you put on Studio Sport saw. ‘

Hordijk also belonged to Team Jonk at Ajax after the revolution of Cruijff in 2010. But after the departure of Cruijff at the end of 2015, Jonk, his most loyal follower, also disappeared from the technical heart of Amsterdam. Fight. In ‘Cruyff Football’, the organization that guards Cruijff’s heritage, his word was spread around the world. Team Jonk flew to the Emirates, China, Japan, the United States, where not actually?

At one point Jonk was asked to become a head coach at the languishing club in Volendam, and his team is active in the club. Jasper van Leeuwen is technical director, Ruben Jongkind is head of methodology, Freek de Boer is head of performance and Patrick Oudejans, who replaces Dennis Reus, is manager of the substructure. The manager of the middle school, Cees Keizer, was already there. And Keje Molenaar is also a Cruijffian par excellence.

The Cruijffian philosophy has been rolled out all over the club. Cooperation with the amateur club on the other side of the ditch is of crucial importance. The bridge often turned out to be a bridge too far. Volendam is basking in the Cruijffian game principles, insofar as they had not yet been adopted in Volendam, which is usually offensive. Principles such as: depth for width. Retrieve ball within three seconds. The individual is, certainly in the training, more important than the team.

Hordijk: “Cruijff said: it is never a whole team that makes its debut in the first team, it is always an individual.” Jonk: ‘We have a beautiful hinterland with FC Volendam and the amateur association. If you can integrate things there that we also do here, then that should trickle down. In the long term, this will result in better players. And yes, that bridge is important. But that bridge has always been there. For me, Volendam is one. Talents and good coaches also run among the amateurs. If we can share knowledge, you hope that it will yield results in the long term. ‘

The player is central

After the first season, evaluative discussions followed. Some youth trainers disappeared because of contracts that were not renewed or because of differences of opinion. Hordijk: ‘For some youth trainers it is difficult to let go of the team idea. The player is central. The focus is on individual development. And your vision can be great, ultimately people make the difference. ‘

The long-term goal is to reach the premier league. Train players for the top, more Volendammers in the first team. Midfielder Alex Plat, one of those Volendammers, blowing out from the sidelines after the 1-1: ‘The trainer was not happy. Rightly so. ‘

Plat knows his classics, in terms of Cruijff: ‘You learn to be calm at the ball. If you apply the Cruijff principles, the opportunities will come naturally. Depth for width. three-second rule. Compactness. If you don’t, what you saw the second half, then it’s a messy mess. Everyone is making great progress, especially in the footballing part. We also learn to play better as a team, that’s the advantage. All of us train hard every day, according to those Cruijff principles. ‘

Whether it is tough, recapture the ball within three seconds each time. Plat has also mastered the Cruijffian logic: ‘It depends. If you have the ball back after three seconds, you have made a three-second sprint. And then you can get the opponent running again. That is normally our strength. Play the opponent despondent. ‘

Jonk has already seen the missed opportunities again. He does not understand that eternal building up, when TOP put a lot more pressure after the break. Skip a line. Relocate the problem. ‘You hope that the boys learn to recognize this themselves, that they take steps to do better, to play a different rhythm than most teams can. That goes in stages. Sometimes very good, and then we are vulnerable again. We then become passive. And with passivity they start looking at each other. We must also not allow duels to arise. That calls for free running, going deep without a ball. ‘

In the second half, his team even started to play back to the goalkeeper. That certainly cannot be the intention. “Then you give the key to the opponent, and I don’t like to give the key away.”

Jonk always wants to keep the initiative, just like Cruijff used to be. ‘I always liked talking to Cruijff.’ He has taken the other way of thinking with him. ‘Sometimes I think: just leave that player, because … Or I bring him, because I feel that … That was Johan. Johan believed in feeling. And feeling never lets you down. ‘