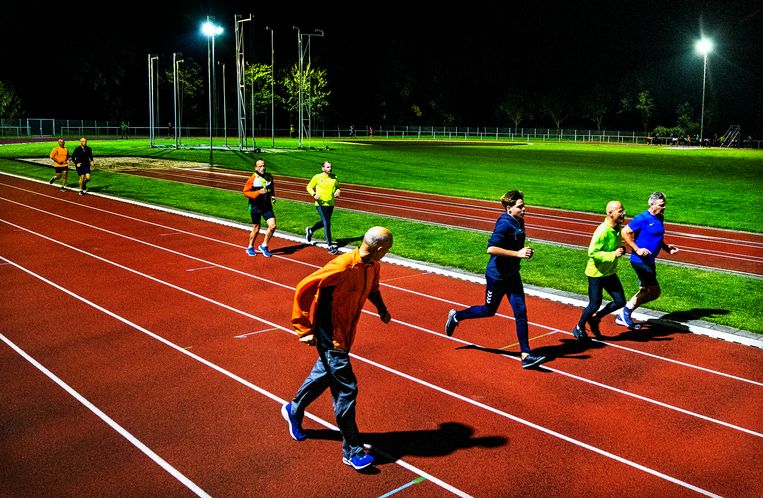 Martin Vergeer clears a corner of the boardroom of all the toys that are there, so that he can open his yellow binder. About those toys maybe a little later, first the binder.

As if he is Sinterklaas, and that folder is the big book, Vergeer sits down for a while. He reads from his own work with a supported voice. Well, own work. The work is actually Homer’s. From the Odyssey Vergeer has plucked the piece about Odysseus’ stay with the Phaeacians. After all his wanderings, he hopes to find some peace and quiet on their island of Scheria.

In his honor, King Alkoös organizes a series of sports competitions. His son Clytoneus is the great star in running. Clytoneus leaves his rivals so far behind “as the tract of arable land is long, that a team of mules can plow in a day.” This is how Homer had worded the victory. Vergeer: ‘Nowadays that would be a street length.’

In a football canteen

On September 7, 1970, a couple of Woerden athletes gathered in a football canteen to found their own club. Under the name SSS (Sport Staalt Spieren) they already ran together through the local streets and sometimes jumped far on Woerden’s grass. But for the real work they actually had to go to Utrecht.

Hans van Mastwijk, one of those present. came up with the proposal to name the new association after Clytoneus. ‘Given the originality of the name, which does not exist in athletics circles and the connection with running, it was unanimously chosen from a selection of several name proposals’, Van Mastwijk emails from a holiday address in Italy. A friend’s father had once told him about Clytoneus.

In order not to make a mistake, the brand new board paid a visit to a local classicist. How did you pronounce that, Clytoneus? Stress on the first syllable. Vergeer: ‘Later we had athletics competitions here with a few Greek participants. They pronounced it very differently, but maybe that was New Greek.’

Incidentally, Hans van Mastwijk himself was and remained a talented junior member of Phoenix in Utrecht. It also took a few years for Clytoneus to offer its members private accommodation. Fanny Blankers-Koen, who in her best years could also lead fields, opened the clay court in 1977. It is now tartan.

You should have seen Martin Vergeer’s face as he closed the yellow historiography one weekday morning and glanced at that beautiful athletics track on Waardsedijk. Almost thirty centuries later, they managed to do just that in Woerden.

Oh yes, the toys are from the after-school care that uses the complex on weekdays.