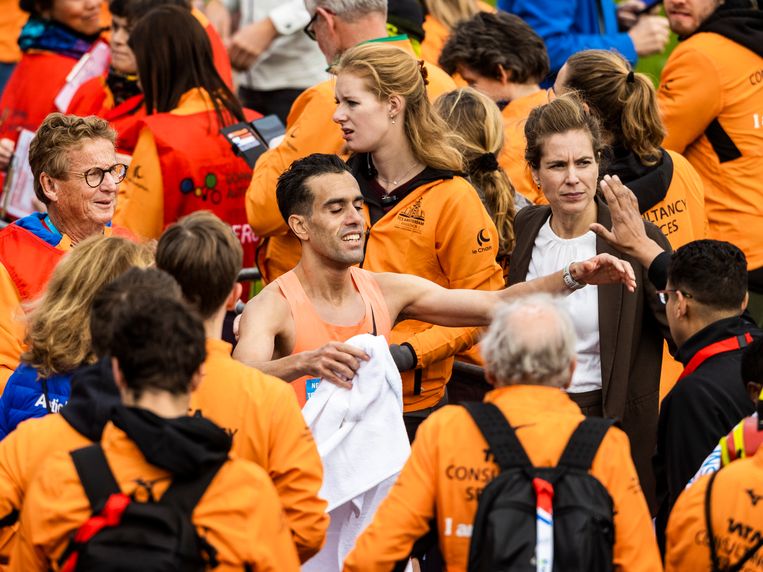 There are several puddles of spit on the tartan of the Olympic stadium. The top athletes fall to the ground after the finish of the Amsterdam marathon. One points with a painful grimace to his hip, the other is helped stumbling towards the wings.

Sitting on the ground, Kenyan winner Tamirat Tola looks blankly ahead after running to victory in a lightning-quick course record 2.03.39, the second marathon time of the year. The course record for the women was also tightened on Sunday. Angela Tanui from Kenya clocked 2.17.57.

The marathon is back. There were no massive running events for a year and a half due to the coronavirus. Now the beats blare out of the speakers again, and queues form outside the stadium for the final discharge into a dixie.

The corona break has done Khalid Choukoud good. The 35-year-old Dutchman enters the stadium cheering after 42 kilometers. With two index fingers towards the sky, he celebrates his national title in time of 2:10:25. Then follows a kiss on the track. In the women’s race, Ruth van der Meijden wins the Dutch title in 2:29:55.

Choukoud is floating on a pink cloud, because he recently became a father of a daughter. Sports are also good. The marathon runner has never felt so fit. Because of the period without competitions, he gave his body and head the break that was needed. “This is the best year of my career. The best year ever. I enjoyed my sport and trained hard. I knew my chances were yet to come.’

Choukoud thinks he needed the forced break. The marathon has not been kind to him in recent years. “I took a lot of hits in the marathon. In 2017 I got out due to a blister. 2018 I fell at the start. I was just short of an Olympic limit in 2019, and then came corona.’

For the first time, he allowed himself to rest. Choukoud ran a personal best of 2.09.55 in Siena this year, qualifying for the Olympic marathon. ‘I needed the time to really recover. Corona helped me, otherwise I would never have been at the Games. Everything has a reason, I strongly believe in that. It all falls into place now. I really wanted to show that I am the best marathon runner in the Netherlands after Abdi.’

Abdi Nageeye won a surprising silver at the Games. He was missing at the Dutch National Championships in Amsterdam because he will start in New York on November 7th. The Games were not a success for Choukoud. He got off in Sapporo because of stomach problems. Next year he will aim for a top ranking at the World Cup in America. With his time in Siena, in addition to the Olympic, he also fell below the World Cup limit.

In addition to the long period of training, there were also concerns. In the months when there were no competitions, there was no income. Ruth van der Meijden therefore decided to work full-time in addition to her training. Choukoud remained a top athlete, but it was not easy for him financially. Marathon runners depend on starting money and prize money for their income. “I like games like this one. We have no income, no A-status and no support from the athletics union. We have to do everything on our own.’

When Choukoud was nominated as a candidate for the Olympic marathon, he was awarded A status with the accompanying stipend in the short period leading up to the Games. That stopped right after.

More marathon toppers had a hard time, Valentijn Trouw says. The athletes manager of Global Sports Communication saw runners drop out. ‘The absolute top players, about forty or fifty athletes internationally, have not run into any problems. Of the athletes who are at the top and have lasted a little longer, some have stopped. They retired earlier.’

We will no longer see Choukoud in a spring marathon, he says. It will be a long period of training again, with the exception of some competitions at shorter distances. Just the way he liked it so much. ‘I was just able to run another 40 minutes,’ he laughs.

When he does his cooldown, there are still people who are toiling on the Amsteldijk. There were almost 10,000 registrations for the marathon, about 7,000 less than at the last edition in 2019 because registration was stopped for a while. Only when the last relaxations came, did the organization know for sure that it could continue. Halfway through the course, on the dike, there are two garden chairs with colorful cushions. The people in it stood up for a moment to cheer. Next to it is the picnic table with coffee ready, as if the marathon had never ended.