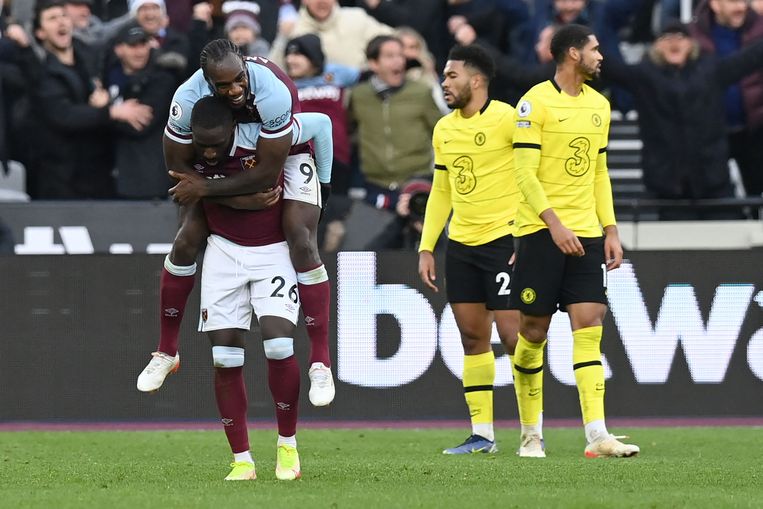 ‘They fly so high, nearly reach the sky.’ What the West Ham United fans do before every game in the unofficial club song I’m Forever Blowing Bubbles singing about the soap bubbles also applies to their heroes on the field. Behind the three clubs that will decide who will win the Premier League – Manchester City, Liverpool and Chelsea – is to everyone’s surprise the formation of Scottish manager David Moyes, a team that stands out for its combativeness.

League-leader Chelsea also noticed this on Saturday afternoon. The European champion took the lead twice – including a beautiful volley from Mason Mount on a pass from Hakim Ziyech – and West Ham tied the score twice. In fact, shortly before the end of the game, Congolese full-back Arthur Masuaku scored the winning goal by surprising goalkeeper Edouard Mendy with a daring shot from a corner considered impossible.

It was a deserved victory from a close-knit team that participates on all fronts. The Hammers are well ahead of their Europa League group and in the week before Christmas will face big rival and neighbor Tottenham Hotspur in the Carabao Cup, after knocking out both Manchester clubs. More importantly, the 126-year-old dockworkers’ club is in a place that is entitled to participate in the Champions League. That would be a debut.

Moyes, 58, who has been at the helm since 2019, gets the best out of a team with strong players but without stars. The anchor is midfielder Declan Rice, England’s best player in last summer’s European Championship final against Italy. Partly due to the tall Czech Tomas Soucek, an old acquaintance of Orange, the corner kicks are life-threatening. The jewel of the team is the Algerian attacker Said Benrahma, who is very reminiscent of Ziyech.

No hammer, however, is as important and beloved as Mikhail Antonio, the Jamaican who has spent six years at the striker dragging, sprinting and scoring. Along with Chelsea’s Romelu Lukaku and Wolves’ Adama Traoré, the 31-year-old is one of the Premier League’s three powerhouses. He is always playable, works his way through the seams and can score from all positions, something the American team recently noticed in the World Cup qualifier against Jamaica.

Due to its success, London Stadium, the Olympic Stadium where Usain Bolt was once king, is finally starting to feel like home five years after leaving Upton Park, an impregnable fortress with a running track for a moat. Every game is packed with 60,000 spectators. Football under David Moyes is so much fun that fans almost forget to express their discontent with the other two Davids: the hated owners Gold and Sullivan.