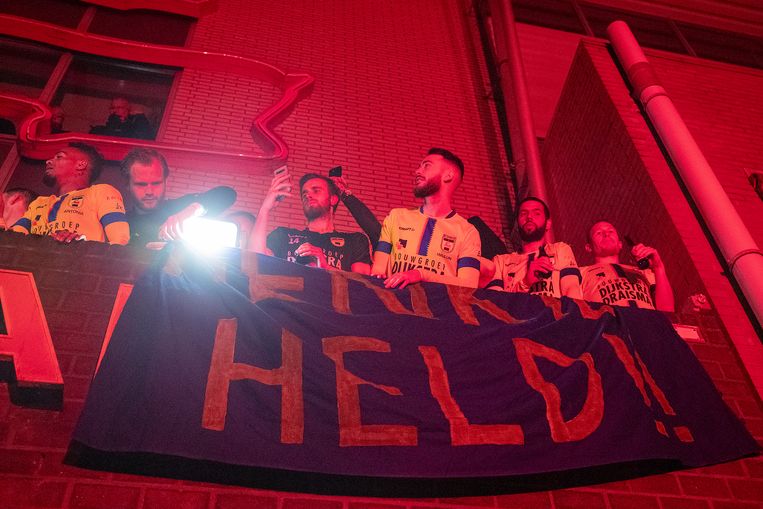 They were special images, late Friday evening in Leeuwarden. While Cambuur settled with Helmond Sport in an empty stadium, singing was heard outside and fireworks exploded. An audio tape to create atmosphere in living rooms was not necessary. Turning a blind eye to the gathering of an estimated 2,000 supporters was allowed by the municipality, which realized that no one could stop the supporters, nor would they stay five feet apart.

Trainer Henk de Jong asked the supporters, when the party on the Cambuurplein was still buzzing and the players had appeared on the steps of the stadium, to go home, even though the curfew had already started. “Maybe we will be able to do something unique in May, after the eventual championship,” says De Jong, pipe of beer in hand. General director Ard de Graaf said it was utopian to think that supporters at home would have stayed in front of the TV.

It was the catharsis, the primal joy of supporters, who carried their frustration with them for over a year. Everyone had to express that pain, including the euphoric players, some with special undershirts to express the feeling of satisfaction. The laugh, the tear, the unprecedented joy, the defied anger too, clearly visible on the banner in the empty stadium with the large letters: justice.

Cambuur Leeuwarden, the people’s club that returns to the highest level after five years in the Kitchen Champion division, was one street ahead last season, when corona ended the competition and the KNVB decided not to promote anyone or to relegate anyone. A lawsuit did not change the viewpoints and the colorful trainer Henk de Jong emphasized the feeling of injustice at the club, by saying in the emotion that it felt like ‘the greatest shame ever in Dutch sport’.

Despite that setback, Cambuur was able to keep the selection together, to do even better this season, after it had been difficult to forget the disappointment at the start of the competition. Cambuur won 4-1 on Friday, scored exactly 100 goals and was unofficially champion, because number three Almere City could only draw in points. The numbers 1 and 2 are promoted directly to the premier league.

Due to Cambuur’s extremely good goal difference, the promotion was actually more than unofficial on Friday. Last season’s top scorer, Robert Mühren, was once again of a lonely level. It scored 34 times, just over a third of the total production.

On Saturday Almere lost to Go Ahead (3-0) in Deventer, making the promotion official. De Graafschap is the most important candidate for the second PhD place, although NAC, Almere and Go Ahead are still participating. Friesland again has two clubs in the premier league next season: Cambuur Leeuwarden and Heerenveen.