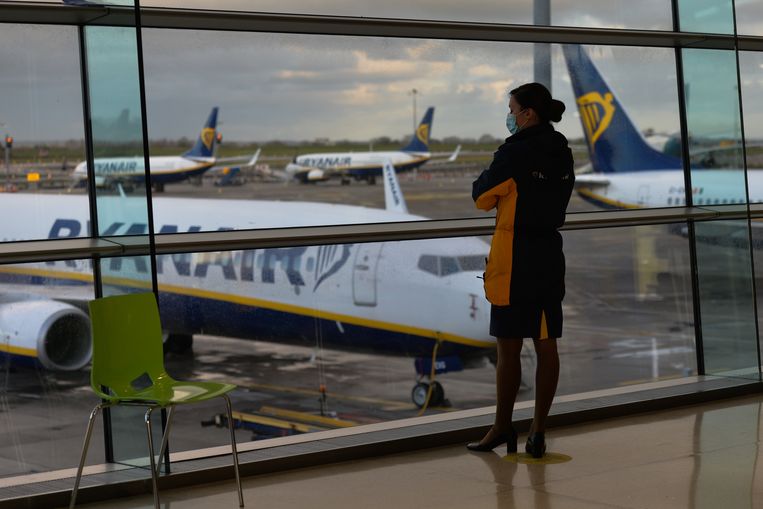 Just Tuesday, the airline again announced disappointing figures for the past month. In February, only half a million passengers boarded its aircraft. In February 2020, there were 10 million more. Ryanair hardly expects any improvement this month.

As compensation, the cabin crew are given 19 extra days off. Earlier, the Ryanair pilots in Belgium already reached an agreement with their employer. They sacrifice 20 percent salary to save their job.

In recent months, the unions in Spain and Germany have also backed down their opposition to wage moderation in exchange for a job guarantee. In the newspaper The standard a union official called the deal “a huge relief to the staff who have lived in uncertainty for eight months.”

Since the coronavirus outbreak, Ryanair has cut 3,000 jobs in Europe. The company has bases at the airports of Zaventem and Charleroi, which employ a total of 500 people.

Ryanair announced at the beginning of last month that it is heading for a loss of almost 1 billion euros for 2020. In the last three months of the year, the number of flights decreased by 78 percent compared to a year earlier. That already resulted in a loss of 306 million.

The company is focusing on ‘critical routes’ rather than trying to keep the entire network afloat. It does fly with empty aircraft to keep it technically operational. An aircraft that has been stationary for too long also needs maintenance and must undergo a start-up program that can take days to complete. Some planes make a trip through the air for less than half an hour to return to the airport from which they took off.

Meanwhile, CEO Michael O’Leary is aiming for a recovery in the summer, thanks to the large-scale vaccinations in Europe. According to him, 93 percent of people who die from the coronavirus are 65 years and older. “As soon as you remove that risk through vaccinations in the United Kingdom and Europe, we see some more need for travel restrictions.” O’Leary expects the “strong return of British families to the beaches of Spain, Portugal, Italy and Greece in relative safety this summer.”

TV commercials in which Ryanair the slogan ‘vax & go’ (‘get yourself vaccinated & leave’) were labeled misleading by the Irish advertising council on Tuesday. This states that Ryanair cannot ensure that the travel restrictions will end in the summer or even at Easter.

IATA: International aviation went down in the rain in January

The new year has started disastrous for international aviation, the trade association IATA reports. The number of passengers in January was 85.6 percent lower than a year earlier and slightly lower than in December. Air traffic in Asia and the Far East was hit the hardest, with a drop of almost 95 percent. In this region, the number of flights has been at an extremely low level for seven months. Europe was struggling with a decrease in the number of flights by more than 82 percent.

‘2021 started worse than 2020 ended and that says a lot. Even as the pace of vaccination programs increases, new virus variants are pushing governments to further restrict travel, ”said IATA director Alexandre de Juniac. ‘The uncertainty about how long those restrictions will remain in force will have an impact on future journeys.’ The number of bookings in February fell by more than three-quarters, compared to a year earlier.

There is a small ray of hope for the sector: freight transport returned to pre-corona levels in January and even rose 1.1 percent above demand in January 2019 (a comparison with last year cannot be made, because freight transport by the sky was already hit by the corona outbreak). Cargo space capacity is still slightly lower than before the pandemic broke out. Half of the air freight usually goes along in the belly of passenger aircraft and since they fly less, the capacity is smaller there.