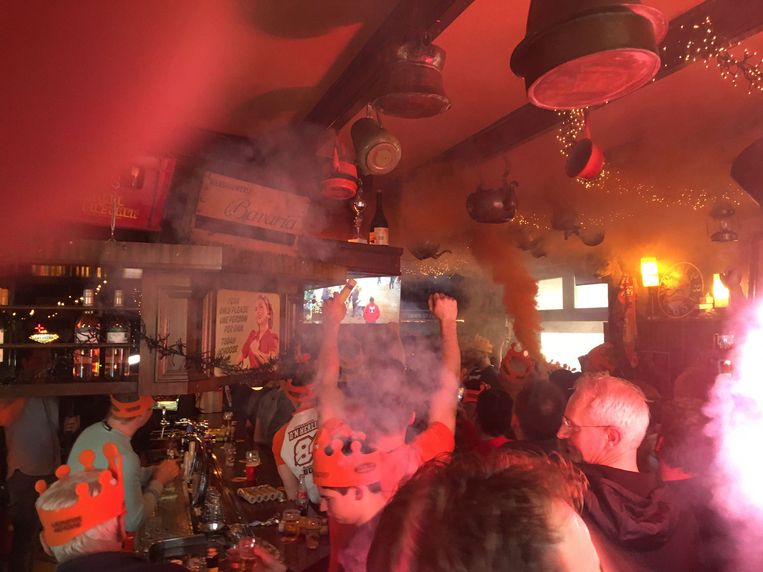 They are not completely reassured on Wednesday, the visitors of café Tielemans in Boekel, North Brabant. No doubt, Jeffrey Herlings is the fastest of the whole stuff. On paper then. In practice, he has been wanting to tumble off his KTM lately. The start is another problem. It is heavier than most of its competitors.

Just before noon they trickle into the brown bar. A few wear a shirt with number 84. Owner Thea Tielemans places the first beers on the counter. The TV is on the live stream from Mantova, where the thrilling denouement of the world championship in the premier class of motocross, the MXGP, will take place in two motos. There is already a box of orange smoke bombs on the table in the kitchen. Thea serves spaghetti. She preyed on Moretti, Italian beer. That just didn’t work.

Boekel is the home port of Herlings. The parental home was close to the Bezuidenhout cross track. His parents – father Peter also raced – had also built a circuit in the garden. In the cafe, testimonials about his early talent jostle. Jeffrey could ride a motorcycle before riding a bike. He completed the cyclocross track in the village on his Yamaha PW50.

At Bezuidenhout he flew as little man with a 65 cc machine over Table Mountain, a flat hump with a length of 23 meters. Immediately open the throttle from the paddock. Many experienced driver did not achieve that with a 500 cc. Jaimy Broens (33) often crossed it himself. “Then I felt like I went through the corner pretty hard and he went around the outside. He was 11 or 12 then.’

The heart of the cross beats in Boekel. In the 1960s and 1970s, 40,000 spectators came here to watch matches, says Thea. There were once 285 registered residents with a starting permit. It has decreased after complaints from ‘urban people’ about noise pollution. The passion is not over. Take the beach race in Scheveningen, 2018. Most participants came from Boekel, 23. That says a lot, isn’t it?

A glance at the screen reveals that Herlings has everything under control in the first heat. When he passes the Frenchman after nine minutes, the conclusion is quickly drawn: he is gone. Jaimy Broens: ‘He doesn’t go to extremes. Only when he arches his back do you know that something is going to happen.’ Herlings wins, Febvre is second.

Tielemans is also about his possession. On the job at the house, he didn’t stop until the gas ran out. In elementary school, he regularly ran amok, in the hope that he would be expelled from class. Then he could at least get back on the bike. He did, however, drive past the classrooms, gassing on his Kawasaki. Look guys, this is what I do it for. Even then, he announced that only two subjects were important: English (the language of instruction in the racing circuit) and arithmetic (to keep track of income). You need that as a future world champion.

Arrogant? Supporters hesitate. Thea says: ‘A little arrogance is allowed.’ Ton van der Elzen, member of the De Vlammers motorcycle club, knows him from maize crosses he organizes, competitions over stubble fields, after the harvest. “He is confident. But that’s how he is: sometimes he just rides with us.’ Ad Janssen is friends with father Peter. ‘It’s more shyness, I think. Jeffrey is slightly shy.’

They don’t see him much in Boekel. He lives further away, in a country house in Oploo. He has built a swimming pool. His trophies are in a garage. He usually eats with his mother. There is little time for social contacts. Everything revolves around sport. His friend Maurice van den Broek describes him as ‘a bit of a homebody’. “Usually he goes home quickly after a game and leaves as late as possible for the next one.” In the meantime he trains, sometimes at Bezuidenhout, more often on a track in the village of De Mortel. There is heavy sand there. That makes him better.

In Mantova, the live stream shows, the tension quickly dissipates. The cafe cheers twice. At 3.15 pm there is euphoria: Herlings overtakes his competitor inside. At 3.20 pm, jeering is heard: Febvre pulls his motorcycle down in pursuit.

Orange smoke billows through the cafe, in the square outside, across the road. A visitor grabs a motorcycle and lets the rear tire smoke for a long time on the cycle path. For a moment it looks like he wants to leave a J on the tiles with the scorching rubber. That is not the case. ‘Are you crazy! This is a burnout.’ In Boekel they know that smoke is a much more fitting tribute to the new world champion on the dirt bike than a letter on the pavement.