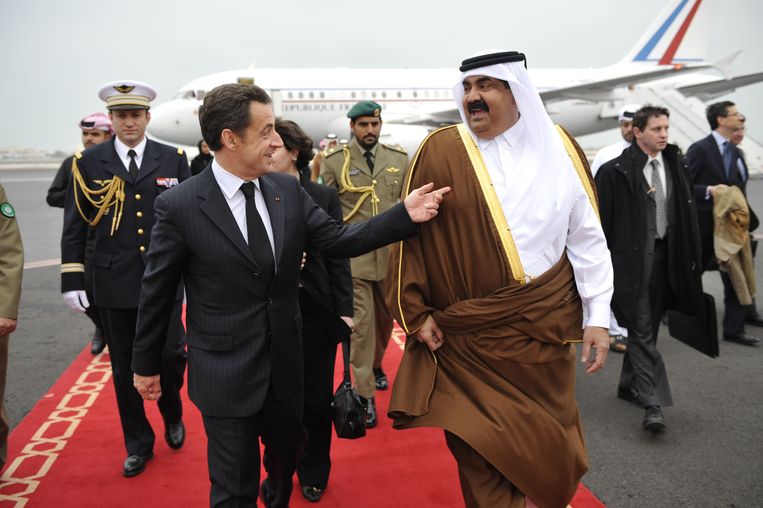 Sarkozy prevented the expected victory of the United States by pointing out the then Uefa chairman Michel Platini to the French trade interests in Qatar, which for a long time seemed hopeless in the election. The United States, Australia, Japan and South Korea were the other candidates.

Sepp Blatter, president of FIFA at the time, states in the forthcoming biography of Dutch football director Michael van Praag: ‘Then came the political intervention by President Sarkozy of France, which made it clear to Uefa president Michel Platini were in Qatar. About a week before the vote, Platini came to me. He said, “We have a problem with the United States because the President of France has asked me to vote for another country.”

Nobody wanted to go to Qatar

‘He and his companions then voted for Qatar, while nobody really wanted to go to Qatar at the beginning. Even today, Qatar is still a long way from being appreciated by the football world. In my opinion it is still not good to have a World Cup in Qatar. It has always been said that bribery was involved, but I think it was mainly a political decision to go to Qatar. ‘

Sarkozy, sentenced to three years in prison on Monday (two of which are suspended) for corruption and the unauthorized use of his influence in his years as president of France, thus brought the World Cup to Qatar, according to Blatter’s reading. He gave Platini a ‘service assignment’. Platini then managed to get more board members into the Qatar camp, especially the voters from Europe.

Without Sarkozy, the World Cup would probably have been held in the United States, which is now allowed to organize the tournament in 2026 with Mexico and Canada. The World Cup in Qatar is controversial and much discussed, partly because of the appalling working conditions for immigrants who build the stadiums, the climate, lack of football culture and the construction of stadiums that the country will no longer need after the World Cup.

On top of all that commotion came the revelation of the British newspaper The Guardian last week that many more immigrants died than predicted during the construction of World Cup infrastructure. The death toll has passed 6,500 workers.

The story of Sarkozy and Qatar is broadly known, although many details are still lacking, partly because the long-resigned Platini is still involved in legal proceedings. At the time, the Netherlands and Belgium were candidates for the organization of the 2018 World Cup, which went to Russia during the same election.

The FIFA summit wanted to forgive the 2018 and 2022 World Cups to Russia and the United States. This was even discussed with the Nobel Peace Prize office, as a kind of ‘Handshake of Peace’, as Blatter calls it. Blatter in the book From Prague, behind the scenes of football: ‘The two great antagonists of world politics would then be united in two consecutive World Cups. Qatar was never mentioned as a serious contender within the board. ‘

In late November 2010, shortly before the election, Sarkozy received a high-ranking Qatari delegation at the Elysée, the president’s residence, according to articles by investigative journalists. Platini was also invited, although he later said he was surprised by the presence of, among others, the then Crown Prince (the current Emir) Tamim Al Thani. Shortly afterwards, the mood changed in Zurich.

It is interesting that a few months later the French club Paris SG was bought by Qatar Sports Investments. Since then, PSG has changed from a French sub-top to a club with almost infinite sources of money that wins almost everything in its own country and is only on the hunt for the Champions League trophy.

Last season, Paris reached the final for the first time, losing to Bayern Munich. This season, the entrance to the quarter-finals is close, after the first match against Barcelona at Camp Nou was won 4-1.

Of the 22 Fifa board members who voted on the allocation, as many as fifteen disappeared from the scene, partly because of corruption or because they have been arrested by the FBI. After the election of Qatar, Blatter had quite a bit to explain, especially to the Americans.

In the biography: “The day before the vote, I called President Obama to inform him that the plan to hold the World Cup in the United States was unlikely to work. He asked why. He had sent his predecessor Bill Clinton, chairman of the bid, to Zurich, where the vote was. ‘

From Prague, behind the scenes of football from Volkskrantreporter Willem Vissers will be published April 22 by Inside publisher.