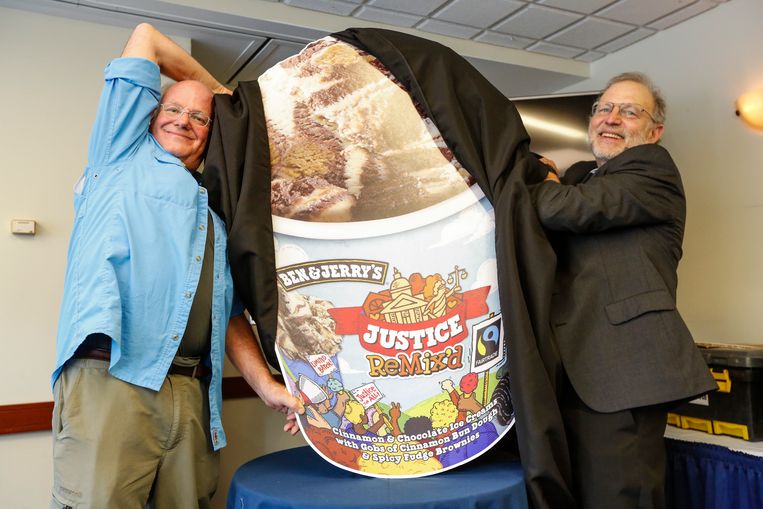 State after state is selling its Unilever shares because subsidiary Ben & Jerry’s no longer wants to sell ice cream in Israeli-occupied Palestinian territories. This stubborn attitude is entirely in accordance with the principles of the company’s founders and namesakes.

‘We are Ben & Jerry. Men of ice, men of principle.’ This is how Ben Cohen and Jerry Greenfield, the founders of ice cream brand Ben & Jerry’s, start an opinion piece in The New York Times end of July. They defend the brand’s controversial decision to stop selling ice cream in Israeli-occupied Palestinian territories. Cohen and Greenfield are themselves ‘proud Jews’, they write.

Ben & Jerry’s, the world-famous ice cream maker with names like Cookie Dough, Chocolate Fudge Brownie and Vanilla Pecan Blondie, is critical but not anti-Semitic, the two emphasize. The controversy about the decision announced in mid-July is no less great. Seven US states, including Florida, are either divesting or considering divesting Unilever stock from their state pension funds. They regard a boycott of the occupied territories as a boycott of Israel. And they are strongly against that.

Cohen and Greenfield (both 70) did not make the decision themselves. They are only involved in the background in the company they sold to Unilever in 2000 for $326 million. That was 22 years after they opened an ice cream parlor in a dilapidated gas station in Burlington, a college town in Vermont, USA with $10,000 in cash.

Cohen is a failed potter, Greenfield has been rejected by more than 40 medical schools. They choose ice cream because it is relatively cheap to make. The store should be a place where the community comes together. The mixing spatulas are there on the counter so that the customers can lick them off. “We weren’t hardcore hippies, but we did believe in love and peace,” Greenfield recalled in an interview with Bloomberg. In photos they pose with a cow, smiling happily and with wild hair, licking an ice cream.

The fact that Ben & Jerry’s grew into the company it is today also seems more or less coincidental. Winters in Burlington are so horribly cold that people have no appetite for ice. In the summer they have to make up for the red numbers, but they soon realize that they are creating too large bulbs for that. The men refuse to reduce their portions and immediately start selling ice cream containers next to the parlor to restaurants and shops.

New York Timescolumnist Brett Stephens recently mockingly dubbed the men the ‘godfathers of Woke Inc’, a name that won’t bother them themselves. Cohen and Greenfield believe that a company should serve society, and their entrepreneurship has not diminished their left-wing nature. Ben & Jerry’s has had more influence on capitalism than the other way around, Cohen told the New York Times, referring to the companies that are now (cautiously) following their example.

The company is growing fast. Adhering to social principles and publicly adopting progressive views is another sport for a publicly traded company. Yet the founders consciously choose the activist course. In the 1990s, they introduced the Peace Pop, a Magnum-like ice cream, among other things. On the packaging is an argument to spend the 100 billion dollars that goes to defense every year on education and health care.

Some principles are also broken. The idea that the director should not earn more than five times as much as the lowest-earning employee, for example. If Cohen steps down as CEO in 1994, they should broaden that principle to a ratio of seven to one. In their own words, they would otherwise not be able to attract an external CEO. Less than ten years later, the ratio is seventeen to one, writes CNBS News.

In 2000, Ben & Jerry’s is sold to Unilever, much to the chagrin of both founders – it was the choice of the shareholders. The company enforces an independent board, but the first ten years under the multinational were “not good,” Greenfield recalls. “Unilever didn’t understand our mission.” The parent company is said to have continuously tried to make Ben & Jerry’s less controversial, and has been reasonably successful in doing so during that time. The appointment of Paul Polman as CEO of Unilever in 2009 changed that.

“Paul Polman was genuinely committed to sustainability,” says Greenfield. Jostein Solheim, who took office as CEO of Ben & Jerry’s in 2010, also dares to take risks. Gay Marriage Campaigns, Occupy Wall Street, Black Lives Matter. We were able to speak credibly on the latter issue because we had been working on the subject for years, including by paying attention to the oppression of black voters in North Carolina.’

Unilever now regrets Ben & Jerry’s right to pursue its own course. ‘We will not do that anymore’, said Unilever director Hanneke Faber recently in an interview with the Financial Newspaper. According to Faber, Unilever’s values ​​match those of Ben & Jerry’s for ’99 percent’. The position on the occupation of Palestinian territory, which according to RTL costs Unilever about half a billion euros to shareholders, apparently falls exactly outside this.


Greenfield on how they befriended each other in elementary school: ‘We were fat, unsportsmanlike and fell by the wayside’.

Greenfield on their decision to step back into the 1990s within the company: “If Ben Cohen and Jerry Greenfield get run over by a truck tomorrow, this company still has to do the things it’s built on.”

Cohen on the sale to Unilever and the loss of values ​​such as the pay gap between employees: ‘Now that we are owned by a giant multinational company works against what I think is necessary to create a more equal society. But under that constraint, the company is doing what it can to heal the wounds of capitalism.’