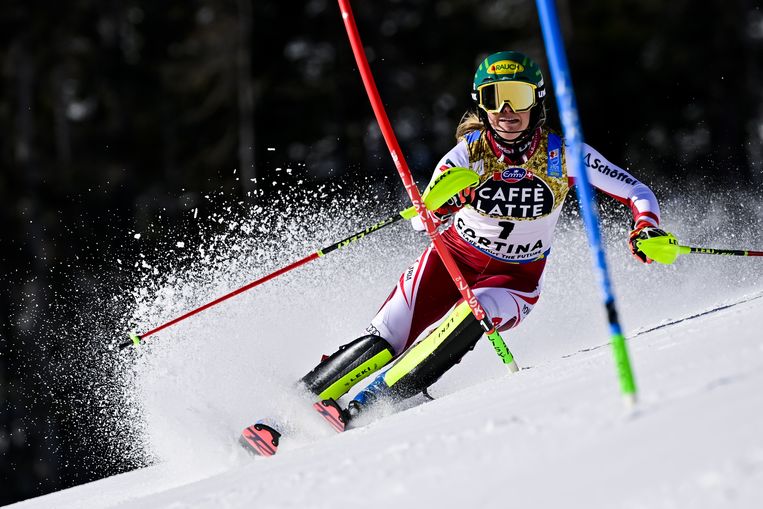 No one has mastered the slalom on the steep mountain better than the American Mikaela Shiffrin. Since she was 17, she has dominated the major ski tournaments. See you Saturday, on the Druscié A slope in Cortina. There she was, on the hunt for the unparalleled fifth world title in a row, stopped by the Austrian outsider Katharina Liensberger.

That daredevil has never won a World Cup (Shiffrin no fewer than 68 times), but has outgrown himself in the Italian Dolomites last week. First she became (shared) world champion on the new World Cup number parallel slalom. Then she captured bronze in the giant slalom, 0.09 seconds from winner Lara Gut and 0.07 from Shiffrin, the Olympic champion in that number.

Then came the sunny Saturday in Cortina d’Ampezzo, an Olympic site of 1956 that will experience another moment of glory in five years. Liensberger started the first run with starting number 1 and took maximum advantage of the still intact track. Shiffrin was sloppy, according to the comments. Liensberger sharp. She was down 1.3 seconds earlier.

In the second run of the slalom it was Shiffrin’s turn in 27th place. She skied in her well-known flowing style to the first place for the time being, especially with a strong last piece. After that Petra Vlhova, the Slovakian specialist on the technical numbers, knocked Shiffrin off the throne and Liensberger slalomed to the world title with a very aggressive approach. She was again faster than everyone else, even 1.98 seconds better than the bronze Shiffrin: a regal margin.

Lessons from her father

Liensberger (23) fell to the ground of pure joy and was embraced a little later by the dethroned champion who was the best in Schladming (2013), Vail / Beaver Creek (2015), Sankt-Moritz (2017) and Are (2019). Shiffrin is known for her sympathetic performance. ‘Be nice. Think first, ”those were the lessons her father Jeff taught her.

Jeff Shiffrin, a former competition skier, was the man who infected the family with the ski virus with his wife Eileen. Last February, the anesthetist died after an accident at home, aged 65. Mikaela and mother Eileen were on their way in Europe and flew directly back to the US. The fourth consecutive victory in the all-round World Cup, the top prize of every international ski winter, fell to the Italian Federica Brignone. The main prize in the slalom, six years in a row for Shiffrin, went to Vlhova, the woman who has gathered a coaching team of fourteen men around her.

Just 25-year-old Shiffrin, diagnosed as an ADHD child in her youth, has been known to train mostly on her own, hard, using every moment to get on skis. Her father always pointed to the Austrian approach based on Daniël Coyle’s ten thousand hours standard, which is also common in the Netherlands. That ‘ten grand’ is not feasible on the slopes, because most of the time is used to get back on top of the mountain with the lift, gondola or cable. Shiffrin even dances in training. It is a succession of smooth and surprising dance steps, a kind of imitation of the rhythm of the slalom, quickly flashing from one chicken bar to the next.

It is clear that the Corona year and the family drama influenced the shape of ‘Mika’, as she is known in the community. This season she only won two world cups. On the other hand, with her four medals from Cortina d’Ampezzo (one gold on the combination), she is the most successful American skier at World Cup level: six world titles, eleven medals, three more than the compatriot Lindsey Vonn who is elevated by marketing above all. .

In winter, Austria is the base for Shiffrin, who speaks fluent German. That ski-mad country, as proved once again at the World Cup in Italy, is still the measure of all things in alpine skiing. No fewer than five world titles went to Austria. In the men’s category, Vincent Kriechmayr won the gold on the Super-G and the main number, the descent, in a rarely seen double. Marco Schwarz signed for the victory in the combination.

With the women, Switzerland with Lara Gut (2) and Corinne Suter was a nose length ahead of the Austrians who had an unexpected top scorer in Katharina Liensberger. She has already been on the podium of a World Cup competition five times this season and struck at the right time of winter.

The young woman from Feldkirch, eighth on her only personal number, the slalom, at the 2018 Pyeongchang Olympics, said she benefited from the adaptation of equipment. The Austrians, with the ski factories within their own borders, had tried less rigid slalom slats on the Reiteralm near Schladming. In addition to Liensberger’s top form and aggression, the recipe for an important world title was written.

Liensberger said he was ‘happy and grateful’. Her explanation for the second great victory of her life was one from the mental handbook. ‘If you really want something, everything will work.’