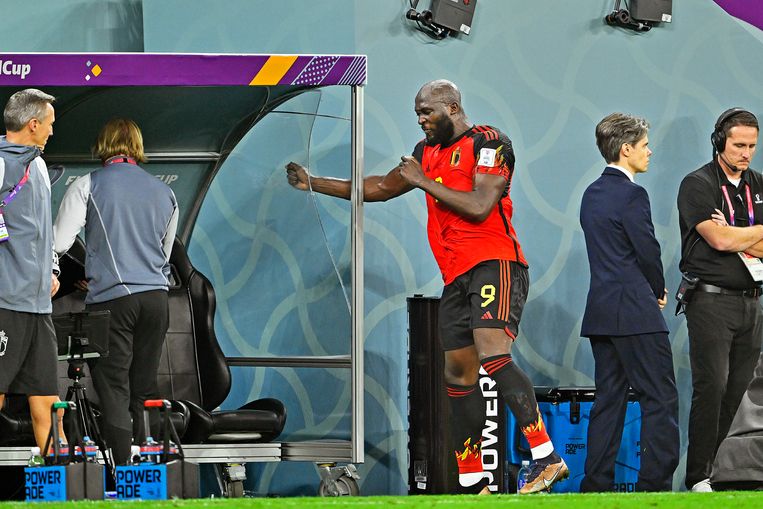 They are therefore penetrating images, Thursday, after Belgium’s elimination at the World Cup by Croatia. Romelu Lukaku, subbed in, walks to the side. He pulls the shirt over his tear-stained face and rests his head on assistant trainer Thierry Henry’s shoulder, who gives him sweet, encouraging pats.

National coach Roberto Martinez announces his departure after six years during the press conference. “It was my last game. It makes me emotional’, said the Spaniard, although he had left after the World Cup anyway. “I made the decision just before the tournament. We may not have won a tournament in those years, seven players, almost eight, have now played 100 or more international matches. That is a wonderful legacy. All those young people in the locker room are learning from this generation. I am extremely proud. The real fans in Belgium appreciate what we have done.’

Sadness, pride, disappointment and also anger. At Lukaku in particular, with 68 goals Belgium’s top scorer of all time, but precisely at the moment of truth he misses a chance. He knocks a sheet of Plexiglas out of the dugout as he retreats. Twice the goal is almost open. He hits the post and heads over. Once the hard played ball bounces wide through his leg, and finally he does not expect a missed cross.

Just that lack of sharpness; 0-0 against Croatia. The Belgians were eliminated due to the defeat against Morocco, when one of the best goalkeepers in the world (Courtois) made a mistake and the team looked apathetic, just like in the opening game won against Canada. Two goals against, one for, it’s meager.

Both teams walk to the supporters, after the game. The Croats euphoric. The Belgians sad, crying, with straight faces, and finally also under applause. What started ten years ago with a 4-2 in an exhibition game against the Orange in Brussels, ended with elimination in stadium Ahmad Bin Ali in Doha. With disagreements too, especially at the beginning of the tournament. Disapproving whistles are there for the turn of Eden Hazard, the wizard who has been robbed of his staff. He’s been a shadow of himself in recent years.

But retreat should never be the last impression of an era. Close your eyes and think about the past. The dribbles of Hazard, the days when Lukaku did score, the passing and dribbles of Kevin De Bruyne, who can last for a while. The clever defensive work of Jan Vertonghen or Toby Alderweireld, the graceful course of Axel Witsel or the light-footedness of Dries Mertens.

Ten years of oeuvre from a beautiful, diverse group, although the results were disappointing all in all. Third place at the World Cup four years ago is the highlight. Later, during a reunion in roughly 2062, the men will hopefully rub each other’s shoulders and reminisce. “Lukaku, remember those chances against Croatia? Boy.’

Martinez was often told that he should have continued to select, but according to him, the youngsters were no better than the veterans. Only: the bodies no longer listen to all signals by heart. And then there were all kinds of riots during this tournament. According to Martinez, there was even a conspiracy by the press, which made up fake news. It’s the steady throes of a trainer in the scramble.

De Bruyne said beforehand that it was impossible to win the title due to the age of the group. Of course, age is not everything, because Croatia’s Luka Modric is 37 years old. He again gave a masterclass in overview and passing, ‘although the match was very difficult for us’.

In the Belgian press it was a lot about those quarrels. An outburst between Alderweireld, who did not want to point fingers at anyone afterwards, and De Bruyne about the way he played during the duel with Canada. It’s the usual scenes as the path descends and it takes a while for reality to set in.

“The disappointment was the defeat against Morocco,” said Martinez. “Today was a great match for players who like to play in the shirt of this country. I missed that attitude in the previous duels. We weren’t ourselves then, because of the lack of will to be a real team. Today the only disappointment is that we are out of the World Cup. Had we gone further, we could have seen the real Belgium. ‘