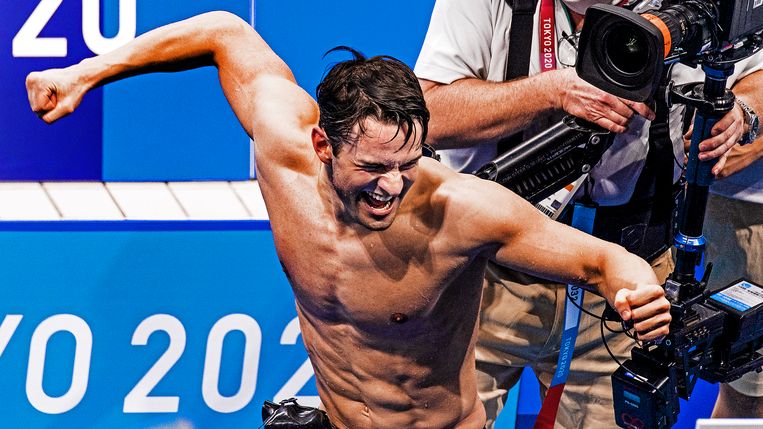 Swimming, says Mark Faber, Arno Kamminga’s eminent coach this glorious morning in sweltering Toko, ‘swimming is about winning matches, from Dordrecht to Tokyo. And not about PRs, about sharpening personal records’.

In that competitive atmosphere, everything for the result, Faber trained the inquisitive Arno Kamminga to become the winner – not a born winner – who still had to be satisfied with two silver at his Olympic baptism. After finishing second in Monday’s 100-meter breaststroke, the 25-year-old swimmer achieved the same result in the heavy 200-meter breaststroke.

The time, 2.07.01, just above the personal and Dutch record (2.06.85) of Kamminga, was of minor importance in the final of the 200 school on Thursday. This morning, in that huge stadium, it was all about tactics. How should the competition be eliminated? How hard did which job have to be?

It was all meant to destroy the Russian Anton Chupkov, the European champion in Budapest in May. That approach worked, but ‘the pot’ was won by 22-year-old Australian Izaac Stubblety-Cook. He still had fuel left for a final sprint. His tactics were even more cunning than Kamminga’s. Ultimately, it is also content. Anyone who wants to address them must be able to be merciless to themselves.

Because after the P’s of pot and PR, there was the decisive P of pain on Thursday. Who can most bear the pain of a race in which the body is utterly worn out?

Going full for two hundred meters, getting into acidification after about 25 seconds, that is harder than skating 1,500 meters, the distance from the taste of blood in the mouth. Also further than the 800 meters from the athletics program, a fierce number, with a final shot.

Kamminga described the pain again on Thursday, with that huge smile of his. Which at that moment, shortly before the ceremony, he suddenly no longer felt.

The last twenty meters of the 200 track burned his lungs like never before. It was, he said, like having knives stabbed into all his muscles. It must have been black and red before his eyes. ‘Whether you’re on fire, that’s how he described the physical experience of the very heavy song, in which the poor get mercilessly on their feet.

The pain must be ignored. Anyone who is distracted is gone. Hands should be thoroughly rinsed through the water. The weir surfaces are not neglected. ‘Because one or two mistakes at about 200 meters and you are the last of those eight swimmers in such a final. This is how close everything is to each other’, was the statement of the Katwijker Kamminga.

He named himself the all-rounder. His coach explained it again. There are breaststroke swimmers, like Britain’s Adam Peaty, who can compete in the 100m. It is jerking and ramming to go as fast as possible. The Peaty style, almost pushing up out of the water, cannot be sustained by anyone longer than 50 meters, except by the Brit himself.

Kamminga swam six days in a row. He has mastered both styles and likes to compare himself to the breaststroke legend from Japan, Kosuke Kitajima. He was double champion in 2004 (Athens) and 2008 (Beijing), master of both distances. After that, no one was able to. Until 2021. Kamminga, with its double silver, has followed one step lower in its Japanese footsteps thirteen years later. The connoisseurs know how clever that is.

The swimmer, a late bloomer who came into the hands of caring coach Mark Faber in 2016, has big plans for the future. He has great confidence that he can get even better. The 2021 level is certainly not his ceiling. He thinks he can go even further with hard training. Making silver turn gold, in Paris 2024.

In anticipation of this, he has cultivated his own attitude, his self-assurance. ‘Walk around like a winner. Swim like a winner. Otherwise you will never win’, is his method. Thus he sketches the pot of gold that he suspects on the horizon.