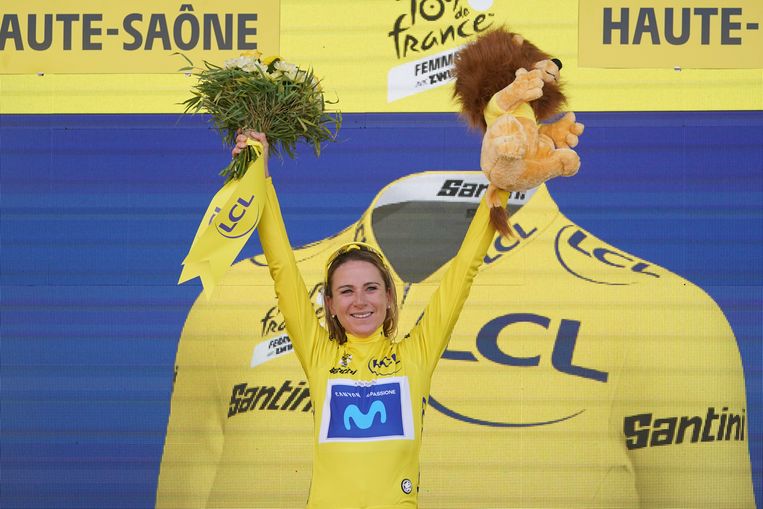 The convincing way in which she won the Tour de France made a lot of sense to Annemiek van Vleuten. On the final climb to La Super Planche des Belles Filles, the Dutch cyclist drove away from everyone about 5 kilometers before the finish line.

“I really really wanted to win today,” said Van Vleuten, who was convincingly the best in Saturday’s mountain stage and then took over the yellow leader’s jersey from Marianne Vos, to NOS. “To win in yellow and here on this finish was a dream.”

Van Vleuten had a somewhat messy run-up to the final climb and had to change bikes four times. The leader of Movistar remained calm and drove away from everyone with more than 5 kilometers from the finish. Just like the day before, she turned out to be by far the best climber in the pack. Van Vleuten then soloed in the Vosges to win the seventh stage, took over the yellow jersey from Marianne Vos and went into the final stage with more than 3 minutes ahead of compatriot Demi Vollering.

Vollering tried to make it difficult for Van Vleuten on Sunday, but at La Super Planche des Belles Filles there was no match for the classification leader. Vollering crossed the finish line in second, 30 seconds behind Van Vleuten. Italy’s Silvia Persico was third.

In the standings, 25-year-old Vollering also finished second, trailing 3.48. The third place was for the Polish Katarzyna Niewiadoma, 6.35 behind Van Vleuten.

For the first time since 2009, the women rode a real stage race through France, which then had a different name. Vos then finished third. Leontien van Moorsel won the French stage race for women in 1992 and 1993.