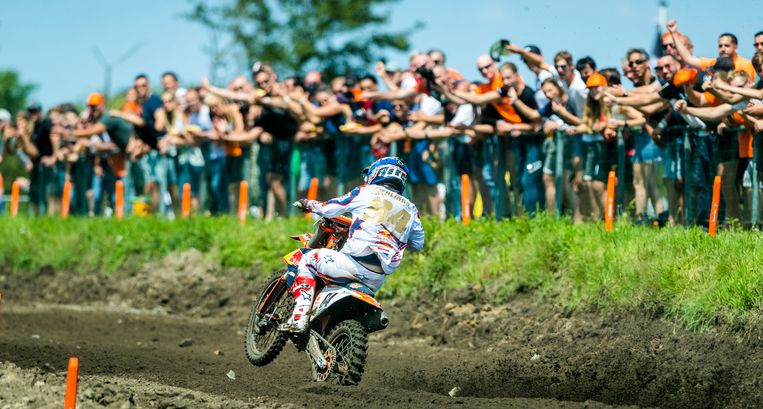 Motocross rider Jeffrey Herlings had one thing on his mind this season: he wanted to take fewer risks so he could finish the season injury-free. The 2018 world champion knew: only then would he be able to capture the world title in MXGP (450 cc), the premier class of motocross, for the second time.

During the grand prix of the Netherlands, things went wrong right after the start on Sunday. Although the 26-year-old from Brabant had not taken any irresponsible risks this time. The first of two motos was a few seconds old when Italian Ivo Monticelli landed on Herlings’ left shoulder after a jump with the front wheel of his 107-kilogram motorcycle.

Herlings seemed to escape unscathed and managed to win the first race over the winding circuit with high bumps and through dry earth. But no one knew that behind his glasses the tears were already in his eyes from the pain. After a photo in the mobile hospice on site, he was found to have a tear in his shoulder blade.

End match. Get rid of title aspirations. “His championship is down,” said his father and former motocross rider Peter Herlings on the edge of the track. “The world championship will be decided in eighteen races, but now that he will miss at least three or four grand prix in the coming weeks, the chance that he can still compete for the title is almost zero.”

It is not the first time that an injury has cost Herlings a possible world title. The three-time MX2 World Champion led the league in the premier class in 2014 and 2015 when injury threw a spanner in the works. Although at the time he took the necessary risks with his way of driving.

The headstrong motocross rider was so much better than his competitors that he started to challenge himself. Winning the race was not enough. He wanted to cross the finish line with at least a thirty second lead. Or even better: putting his competitors on a lap.

Too often too many risks

“The many injuries do not suit his unique talent,” says Joël Smets, sports director of KTM, the factory team for which Herlings rides. “If you’re as good as him, you don’t normally get injured much. But Jeffrey has been too driven and rash for a long time. He has paid a lot of money for that over the years.’

The Belgian, himself a five-time world champion between 1995 and 2003, points to his own career. “I’ve had my injuries too, but a lot less than Jeffrey. And he’s only halfway through his career.’

The list of injuries is long: from a fracture of the thigh to a dislocated hip, little finger and shoulder. And from broken pelvis and a tear in the heel to a tendonitis in the wrist. But the worst injury he sustained in September last year while training for the Italian Grand Prix.

Herlings, who was leading the standings at the time and well on his way to his second world title in the premier class, fell forward over his handlebars at low speed as the front wheel of his bike got stuck in the mud. Herlings landed on his head and sustained three tears in his cervical vertebra. He immediately noticed that he no longer had any feeling in his body from his neck. the motocross racer thought he would be paralyzed for the rest of his life. Until the feeling came back after half an hour.

“The accident in Italy had a big impact on him. Not only because he lost a good starting position for the world title for the third time, but even more because he has experienced what it is like to have no feeling in your body’, says father Peter. “The first days after the disaster he wondered if he should continue racing. But a few weeks later he was back on his bike.’

Second in the World Cup standings

With that history fresh in mind, Herlings wanted to show a new version of himself. Thoughtful and controlled. For his doing. In the hope that he could compete for the world title until the end of the season. ‘He understands better and better that you shouldn’t do too much too soon,’ said Smets. ‘Compare it with a cyclist. It can attack time and time again and create a spectacle or attack well once.’

All the harder was the blow for Herlings, who was second in the standings, that he almost certainly saw his title aspirations evaporate again in Oss in front of his own audience (6 thousand spectators). Without him being able to do anything about it. ‘I have no words for this. I rode so wisely this year, took zero risk and did everything according to plan. I was almost first in the standings and then this happens,” Herlings expressed his frustration on Instagram from the hospital.

Along the track, his father sympathized with him. “I feel the same pain he does,” said Peter. “But in the end I know that the love for the sport always wins.”