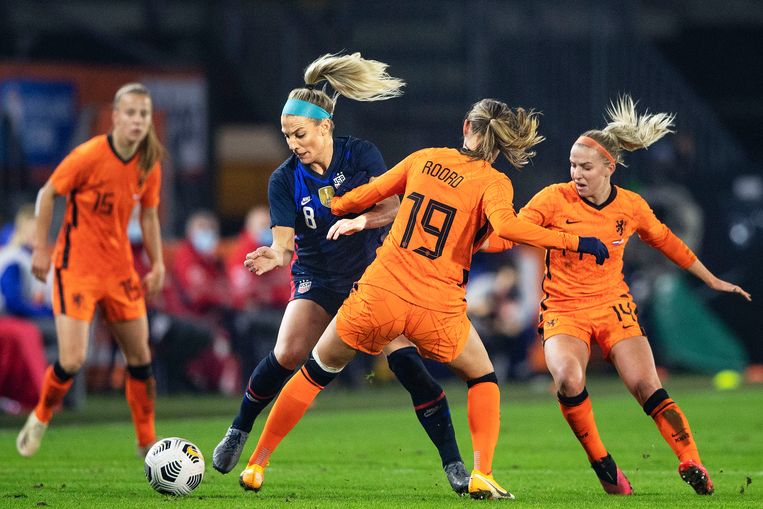 Of course, the Dutch players went back in their minds to Sunday, July 7, 2019. To the Stade Lyon, where they played the game of their lives in front of nearly sixty thousand spectators, but fell short of taking America’s world title. A year later, the wound has healed, although it will always be a lost final, said Daniëlle van de Donk in a video that circulated on social media. She looks at World Cup images and then turns to the camera: ‘A lot can change in a year. ‘

Although the emphasis on Friday evening in Breda was on revenge, the difference with Lyon was big due to corona. No thousands of Orange fans in the stands in the Rat Verlegh stadium, but only orange sponsor cloths to hide the empty seats. No big plans that the KNVB had for the reprise of the World Cup final. It should have been the first time that the Orange women would play in the Kuip or the Johan Cruijff Arena.

The sporting question was whether the Netherlands had come closer to the world champion. Hardly, was the hard conclusion for Van de Donk and Oranje after ninety minutes. In fact, the score (0-2) was exactly the same. If Orange came to half of America, which took office without top scorer and world star Megan Rapinoe, they lacked guts and creativity.

The fact that the first shot on goal was only scored in the 88th minute was telling. The goals against, both caused by loss of possession, were the Netherlands itself to blame. ‘Then the Americans will be ruthless’, interim coach Arjan Veurink sighed.

America showed why it has been continuously number one in the world since June 2017. It was a well-oiled machine, which, even after 261 days without international matches, did its job without a hitch. Tobin Heath and Lynn Williams passed the Dutch backs as if they weren’t there and ran back just as hard to regain the ball when they lost the ball. One of the goalscorers in the final, Rose Lavelle’s goal was of a beauty that deserved the round of applause from a packed stadium.

Behind the success of Team USA is more than just good players. Of course, a country of that size has a larger pool to select from than European countries. Football has been the most popular sport for women there for many years. By offering football in schools and universities, young girls receive the best education in the world, with a focus on the national team. It’s not about club icons, it’s about it national team heroes. Thanks to four world titles and four gold medals at the Olympics, they are.

Eight months will not be enough for the Netherlands to catch up with America for the Tokyo Summer Games. ‘Maybe we should see it in the perspective of years,’ says Veurink. ‘If you look at what has changed between now and five years ago, I believe that with the current structure in the Netherlands, we will continue to grow in the coming years.’

The question is who will take on that task when national coach Sarina Wiegman leaves after Tokyo. Veurink did not think it was the right time to go into it more deeply on Friday, but he reiterated that he is open to the position of national coach, even if he does not yet have the required diploma.

The Netherlands may be able to call on the former national coach of America, Jill Ellis, who won two world titles with her team. In a broadcast Friday of FC Rehab, a football talk show on YouTube, Ellis said in a video link that she will always consider a Dutch offer. Then the KNVB will have to dig deep into its pockets, because with the more than 350,000 euros per year she earned at the American Football Association, she was the highest-paid women’s coach in the world.

The KNVB is currently conducting exploratory talks with people involved in the team, including players and staff, to draw up a profile of the most suitable person. That is a more difficult process for women than for men, says director of amateur football Jan Dirk van der Zee. “There is less choice.”

Van der Zee makes no secret that his preference is for a Dutch trainer. ‘But then the right person must be available.’ Ellis is on the longlist. “It would be crazy if Ellis wasn’t on it,” he says. He leaves in the middle how much the KNVB is willing to pay. ‘We are prepared to go very far. We want a good coach who fits the team. ‘