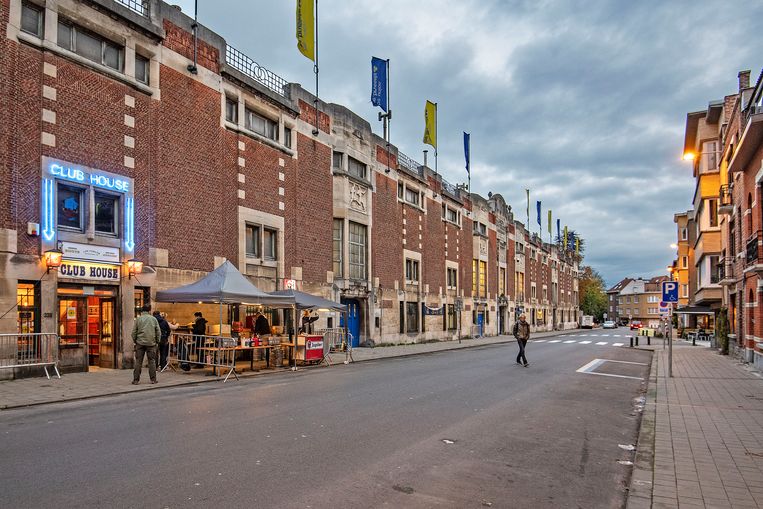 They come from working-class neighborhoods of Sint-Gillis and Vorst. Men in checkered caps, with scarves in the club’s yellow and blue tucked into the collars of their coats. Others have moved here from the revitalized Dansaertstraat and its surroundings. Hipsters, students. You can hear German, English and Dutch from above the rivers. Residents of the city.

They stand side by side on Saturday evening in the middle of the Brusselsesteenweg, in front of Chez Katy and Union’s Taverne. Pints ​​in plastic glasses and bread with sausage in hand, in the light of the lamps on the monumental facade of the Joseph Mariënstadion in Brussels, home of Royale Union Saint-Gilloise. Here and there a timid start for the club song can be heard. Et quand vient le week-end, au parc Duden, je chante pour mon club. Come on l’Union! Soon they will be shoulder to shoulder in the stands.

That the glory of yesteryear has returned between the street with some weathered mansions and the undulating 19th-century pedestrian park in the southwest of the city is still a bit far, but one can safely speak of a resurrection. After a 48-year stay outside the highest echelons of Belgian football, Union returned this season and has been proudly at the top of the Jupiler Pro League for weeks, ahead of national champions Club Brugge and fellow townsman Anderlecht.

In Chez Katy, Yourek Dury (53), a steely member of the hard core Union Bhoys supporters, is sitting behind a glass of beer. He admits that he is still “a little shocked”. ‘It feels strange. Union graduated without us.’ They were not allowed to be there: covid. He has been in the stadium since he was 11 years old. He has seen Union play two seasons in the fourth division in the early eighties. That at the beginning of the 1990s no more than a thousand visitors came to the match; the club was third division. That several times threatened bankruptcy. “Those were the lows, yes.”

Its glorious existence dates back to a distant past. After Anderlecht (30 ) and Club Brugge (13), Union is the club with the most league titles, there are eleven. The first in the Division d’Honneur is from 1904. Seven more followed before the First World War. In the 1930s there were three championships in a row, when the club went unbeaten for sixty games in a row. It’s still a record.

After the war, the shine began to fade. In 1949 Union disappeared for the first time from the league of honor, immediately returned, but the club never got further than the sub-top or the middle bracket. The first class later became the main residence.

The Joseph Marienstadion, named after the chairman who succumbed to a heart attack in 1933 during a match against the great rival Daring Club de Bruxelles, is located in half a bowl of the Duden Park. The standing grandstand extends over the full length of the field, bordered by rows of trees. The trunks glow ghostly pale at night. Behind both goals, chairs in club colors are placed on slopes. Just a few years ago, pitches there were hidden under trees, undergrowth and weeds. Before the war, the stadium could accommodate 40,000 spectators, now there is room for 9,000.

The 100-metre-long facade of the grandstand facing the street, built in 1926 in Art Deco style, still reflects grandeur, although the once light natural stone of the ornaments looks dingy, if not black, the masonry looks weathered and the window frames are rotten. On panels in expressionistic bas-reliefs football players and athletes are depicted; the association also housed athletics for decades.

Under the grandstand, reception areas with paneling up to shoulder height and stained glass windows are reminiscent of the heyday, albeit cramped by today’s standards. The corridors and stairs in the catacombs are barely a man’s width.

Fabrizio Basano precedes the visit a bit snidely. He has been a supporter for more than thirty years and has also been a member of the board since this season. He opens the doors of the sparsely furnished changing rooms. ‘No, if we were going to play European, you can’t offer this with good decency.’ But nothing should be tampered with. The entire complex has been declared a protected monument. At the same time, charm counts.

Upstairs, Basano had knocked on the wood of the benches. ‘From 1919, the first match in a new stadium, before the building of the facade, against AC Milan.’ He was proud of the lack of luxury VIP lounges, business seats, shop windows and cabinets full of merchandise. ‘In modern football the soul of a club is quickly lost. When you come here, you feel a kick. You know: this is my club.’

According to him, it explains the arrival of a new generation of spectators, who are replenishing the dying crowd of older supporters. Basano: ‘Anderlecht attracts people from all over the country, especially from Flanders. Union has always had its roots in Brussels. We now see the children and grandchildren of the elderly, but also students who have come to live here, expats from the European institutions, migrants. They are looking for the open, family atmosphere. Who knows, they may experience a similar conviviality of the association in the place where they come from.’

Despite romance and nostalgia, the sporting revival is mainly due to the arrival of hard capital. A British investor, gambling billionaire and former poker player Tony Bloom, who already owns Brighton & Hove Albion FC in his own country, reportedly pumped 20 million euros into Union from 2018; the club itself does not mention any amounts. He is the man behind Starlizard, a consultancy that serves betting circuits with computer-controlled predictions of match results. Lizard, lizard, is also his nickname: he worked cold-blooded at the poker table.

The same data is used when compiling the selection. Union preys on players who have become sidetracked at their club or fishes them out from lower divisions. This leads to a team with an even bigger mix than those in the stands: a few Belgians (found in the Netherlands: Siebe van der Heyden near Eindhoven, Senne Lynen near Telstar), a German, a Luxembourger, a Brit, a Japanese, a Maltese, a Malagasy.

Wing defender Bart Nieuwkoop, ex-Feyenoord, is the only Dutchman. The trainer, Felice Mazzù, is from Charleroi. A lot of attention is paid to the two attackers: the bony striker Deniz Undav came over from SV Meppen from the third Liga in Germany, the tireless trotter Dante Vanzeir was loosened at KRC Genk, where he could not count on a basic place. According to coach Mazzù, the team is based on ‘belief in themselves’ and ‘respect for everyone’.

Nieuwkoop, who scored his first goal for Union earlier this month, is enjoying himself in Brussels. “We know we can beat anyone, but we can also lose to anyone. We can only succeed if we remain one hundred percent concentrated. We will walk through fire for each other.’

He had never heard of the club until his agent called. He noticed it when he applied for a job: it wasn’t just about technique, the management also gauged his character. “They already knew a lot about me, I’m not one to cause trouble. They showed interest and confidence. That felt good.’ He praises the policy. ‘There is no haphazard throwing of money. They want to grow step by step.’ Nieuwkoop signed for three years. The Tholenaar now lives in an apartment in Brasschaat.

How did investor Bloom end up in Saint-Gilles? The question is answered by his friend and business partner Alex Muzio, appointed chairman, who owns 10 percent of the shares. He is on the field with a woolen hat, after a 4-0 win over Charleroi.

Before every home and away game, he whizzes through the Channel Tunnel on the train; it gives him credit from the supporters. They have oriented themselves all over Europe. The southern countries were difficult, complicated structures around clubs and players. Germany does not allow outsiders to acquire a majority stake. In France, everything revolves around Paris Saint-Germain. At Union they found history, growth opportunities and loyal and hospitable supporters.

Muzio: ‘You never hear any booing. That appealed to us. It is also very close to London. What helped is that foreign investors are already active in Belgian football.’ They also looked in the Netherlands. ‘The top-5 is good to exceptionally good. But below that, the level is lower than in Belgium. We would like to win. We also had the idea that lenders are less welcome there.’

Bloom is not using Union as a satellite club, housing surplus Brighton players or young talents. Muzio emphasizes that the owner controls remotely. “The decisions are made here. In the summer we were offered a Brighton player, a great talent from Ecuador, Moisés Caicedo. We didn’t need him. He now plays on a rental basis for Beerschot, a competitor. That says everything about independence. We’re only doing what’s good for Union, not what’s necessarily good for Brighton.’

Isn’t he afraid that success and possible economies of scale will undermine the romance of the club? In the long run, the first team will not be able to stay in the Joseph Marien Stadium. There is no parking, local residents complain about noise pollution.

Muzio is confident. ‘Recently, a supporter of ours raised his middle finger to fans of the opponent. It was caught on camera. Our supporters have gone to him. They have said: one more time and you are not welcome here anymore. Brussels pride reigns here. I think our fans will keep an eye out for the new arrivals. But it’s a good question. It is certainly a challenge.’

Is Yourek Dury in Chez Katy already thinking of a stadium with business seats and VIP lounges? He thoughtfully lights a cigarette. “I’m not sure I’ll be there then. Note: When I go, I follow the colors, not the stadium. But I don’t think ahead. I enjoy it now. That’s more than enough.’