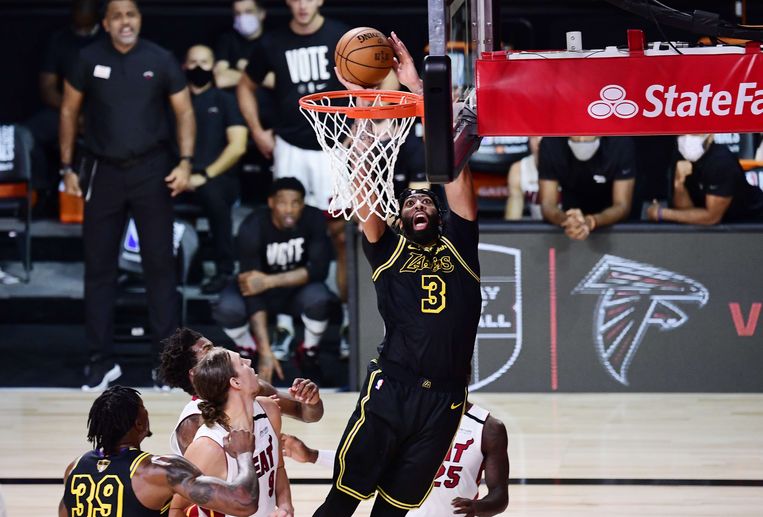 It is not given many basketball players to be the best in a team with LeBron James, but at times Anthony Davis (27) gets just that. In his debut year for Los Angeles Lakers, the versatile giant is well on its way to its first championship.

“ This is why I came to Los Angeles, ” Davis spoke last week in the corona-free ‘basketball bubble’ at Disney World, Orlando, after leading his club 1-0 in the best-of-seven series by 34 points. with Miami. After three games played in the NBA finals, the score is 2-1 for the Lakers.

According to his teammate James, he is a complete player, the definition of the word all-rounder. Davis, 2.08 meters tall, dribbles, scores, takes rebounds and passes at an unprecedented level. Three-pointers and free throws fly through the ring at a high percentage and through his infinite arms (Davis has a ‘wingspan’ of 2.30 meters) attackers revise their course towards the basket. No, never before had James had a more versatile weapon at his disposal.

A summer ago, the Lakers did everything they could to get Davis, who is playing his first NBA final, to Los Angeles. The man from Chicago had to help 35-year-old James to a fourth championship in his twilight years and the club to an eighteenth.

In seven seasons with New Orleans Pelicans, Davis made it to the playoffs only twice, surviving a round once. The star player was done with the club, with the average in his team, and asked the board to put him out of his misery through a player exchange.

In Los Angeles, where the last championship was celebrated in 2010, the message was received with mouth-watering. After a month-long soap, in which the protagonist sulked on the couch, the deal was made: Los Angeles sent half its selection to New Orleans in exchange for Davis. That’s all folks‘said the T-shirt he was wearing on the way to the exit.

The combination with James is already seen as one of the best in NBA history after one season. Lakers supporters embrace the new super duo. With Jerry West and Wilt Chamberlain, Magic Johnson and Kareem Abdul-Jabbar and Shaquille O’Neal and Kobe Bryant, they’ve gotten spoiled. James-Davis is the newest treat.

The two complement each other flawlessly, on and off the field. When Davis’s “unibrow” nicknamed “The Brow,” is low, you better leave it alone, James knows. If the eyebrows are raised, then there is no cloud in the sky. “I want him to experience success that he doesn’t know yet,” said three-time champion James of his younger teammate, who in turn wanted to bring him “back to the final.” The secret of the collaboration? “There is no jealousy,” said James. “We give each other everything.”

The young Davis had to fight for a future as a basketball player. In Chicago he grew up in Englewood, one of the most violent neighborhoods in the south of the city. To protect him from the dangers of his environment, his parents always kept him close. He played basketball in the driveway, or else in a room in a nearby church, where an uncle kept an eye on things.

As a child he was small in stature. Davis played as a playmaker, dribbling frequently and shooting from corners. In high school, he was surprised by a growth spurt like you only see in comic books. From 1.83 meters he shot to 2.08. It offered opportunities.

Few doubted his basketball talent, but it took a while for Davis to be discovered. The super talent played for meaningless schools, but was picked up as a teenager by the prestigious University of Kentucky. In his only year at the training institute, he was selected for the US team that won Olympic gold at the London Games. As a 19-year-old, he shared the floor with greats like LeBron James, Kobe Bryant and Kevin Durant.

In Los Angeles, the city where the spotlight burns brighter than elsewhere, Davis thrived under the wing of James. He is no longer the timid boy of yesteryear. Last year he appeared on Jimmy Kimmel’s talk show. In interviews, he displays the self-assured attitude he rejected from his mentor James, with whom he shares an influential agent. Next year he will play a part in the film Space Jam 2, in which James takes the lead (echoing Michael Jordan in the original).

Davis is currently not short of self-confidence. ‘I’m like this!‘it echoed through the hall in Orlando when he hit a winning three-point in the semi-final against Denver Nuggets. It was as if he had taken an exam. After the seven fruitless seasons in New Orleans, he proved that he can be decisive on the biggest stage.

The realization seems to have come down solidly: in doing well, the NBA is his playground and, longer, stronger and more skillfully than his opponents, he can do whatever he wants, whenever he wants. “We haven’t seen the best of Anthony Davis,” James warned. “This is just the surface.”