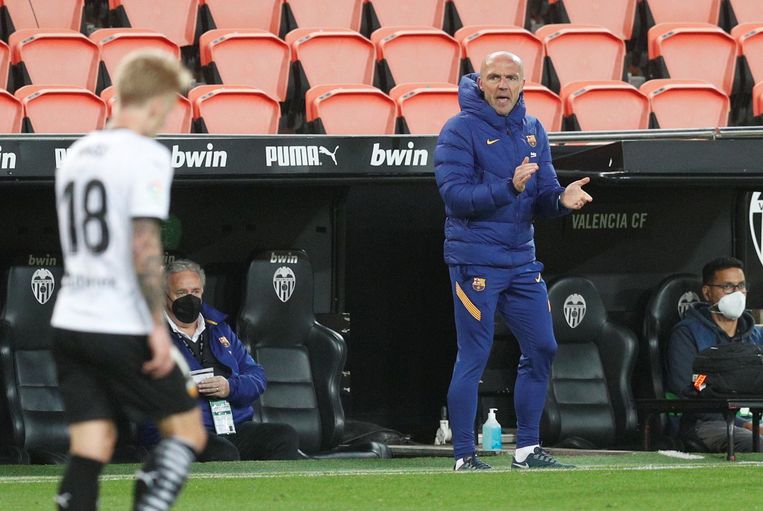 Let Alfred Schreuder slide. Slide magnets that represent imaginary players on a board. Then the FC Barcelona assistant coach is in his element. Against Valencia last Sunday and in the top match against Atlético Madrid next Saturday, the Barnevelder (48) is on the form as head coach due to a suspension from Ronald Koeman. ‘You can’t get higher as a coach. But Alfred is not vain, Alfred is a football animal, ‘says Youri Mulder, Schreuder’s assistant at FC Twente.

He had to leave Twente in 2015, with tar and feathers. Huge clouds of smoke and insulting banners (‘Alfred, let your big head work, fuck off to limit the damage’) in the Grolsch Veste left nothing to be desired in terms of clarity. The local press skinned him. His coaching career seemed to be ready before it even started.

Six years later, he stands in front of a magnet board in the FC Barcelona dressing room with world and European champion Sergio Busquets, thinking about how to best combat different ways of playing the opponent. Schreuder enjoys seeing the level at which Busquets thinks. Or if he finds that Lionel Messi needs half a word when he explains a fairly complex exercise. When he sees the Argentinian star laughing again, but also working hard on the training field, partly due to the exercises of Schreuder, previously assistant to Ajax coach Erik ten Hag during the successful 2018-2019 season.

“They are exercises that are fun and challenging and unconsciously make players super fit,” Schreuder already explained. He learned them from Julian Nagelsmann, the most expensive coach in the world.

Barcelona looks so much fitter, more eager and more balanced than before Koeman and Schreuder settled in Catalonia. The title has even come into full view, while this is actually a transition year.

Schreuder had his peak as a player at NAC. His legs wouldn’t move as fast as his head. Last Sunday, he saw Barcelona turn a deficit into a 3-2 win from the bench after the break. Mulder: ‘Isn’t it nice how he apparently cleaned things up in the rest. Although it is of course also nice to have so much experience in the team. But then they have to take you seriously, huh. They can also drop you. Alfred is not going to play a role, he has the baggage to win top players. Just ask Ziyech, Tadic and De Ligt. ‘

Mulder himself also once became from assistant to the temporary head coach at Schalke. ‘It especially tickled when I had to explain the game plan to the players, everyone suddenly looks at you. Things went pretty easy with the media. I had already played with Schalke, speak the language well. Alfred did not have those advantages when he came to Barcelona. ‘

Mulder, along with Mike Büskens, was initially very successful. ‘No matter how down-to-earth you are: when it goes, you will get a huge kick from the power you have.’

René Meulensteen also knows what it is like to suddenly be in the spotlight at a top club. It happened to him when Manchester United manager Alex Ferguson was suspended. He was in the boardroom. We had contact through one of those old-fashioned white rotary phone with a cord. It hung next to my chair. The other assistant made a dent because every time I answered, Ferguson just hung up and vice versa. Fortunately, we had discussed everything. It was a difficult game against Sunderland, which we narrowly won. Only afterwards did I get Ferguson on the line. I replied with: ‘Hello, pizza express, how may I help you? ‘ He hung up immediately, didn’t get it. ‘

Only later did Meulensteen realize how ‘grotesque’ it all was. “At that point, you just have to do what you have to do.”

Andries Jonker also had that attitude at Bayern Munich, where he temporarily stepped in for the sacked Louis van Gaal, whom he previously assisted at FC Barcelona. ‘In Barcelona I would already be head coach at a practice match. Due to the rainfall, it was moved from the small stadium to Camp Nou. I was already rubbing my hands. Really thought: well, this is great, hey. But that field was also blank. We couldn’t even use the artificial turf. ‘

No ‘head coach Barcelona’ on his resume. But at Bayern he stood in front of the group for no less than three months. ‘I already did parts of training, and the analysis of the opponent when Louis was still there so I was used to speaking in front of the group. I had the support of Louis, the club management and the captains. There was a great press officer who knew exactly what was going on, what questions came up; a big advantage.’

Jonker received compliments and later an appointment as head coach at the ambitious VfL Wolfsburg. ‘It can be that strange, because I didn’t really like it. I wanted to continue with Louis at that club, and not alone. ‘