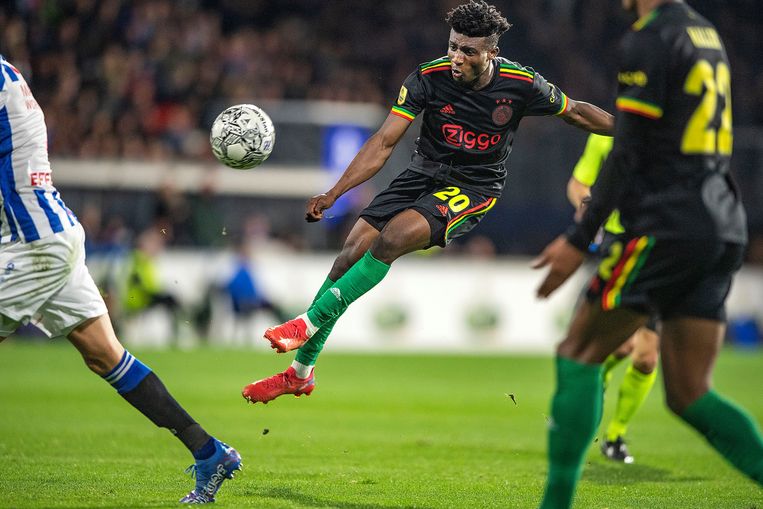 Perhaps Heerenveen had hoped for a spectacular evening on Saturday, when the competition resumes after international matches. Playing football in a full stadium, which evoked memories of great times in Frisian football. The steaming evening light, Anthony Musaba’s dribbling on the waves of the swelling sound. Goal: to provoke the Ajax players, many of whom had traveled for their country, to the utmost.

But yes, that is one of the reasons why Ajax has such a wide selection. Just being able to draft Perr Schuurs. Mohammed Kudus. Substitute David Neres for a decisive goal. Lisandro Martinez to keep the defense afloat. Jurriën Timber move to midfield to restore balance. While Dusan Tadic, Daley Blind and Davy Klaassen always want to play football.

From this point of view, Ajax’s problems are luxury problems that other clubs only dream about in an unguarded moment. So Ajax won at the start of another block of duels until the next international break in November. Borussia Dortmund, Tuesday in the Champions League, PSV Sunday, and so on, every three or four days, including international matches. That is heavy. Of course.

Trainer Erik ten Hag belongs to the growing group of critics on the crowded calendar. Too many matches, overtired players, ergo lower quality football, injuries and mental pain. No one has a real solution. Fewer international matches, says one. Fewer club duels, the other thinks. Everyone wants to make money. Nobody accepts a smaller piece of the pie.

Ten Hag is a real trainer who wants to make his team better. For this he needs training time with the whole group. So he says, in the Abe Lenstra Stadium: ‘The group of internationals who play everything is overloaded. The group that doesn’t play everything is underloaded. The very small group that remains behind at the club cannot be taxed properly and has no resistance. It’s a lost period.’ And so he is pleased with the excellent first half, with a clever goal from Sébastien Haller, who had saved himself the trip to Africa because of family expansion. Martinez was the only one of the South Americans on the scoresheet. Antony and Nicolas Tagliafico had not even seen Ten Hag after their return. The Mexican Edson Alvarez did not feel fit enough for a game.

Ajax has not played that much football this season, by the way. Nine matches in the Premier League, plus two in the Champions League. For clubs that do not have to play European preliminary rounds, it is not so bad with the number of matches. Ajax played 51 official matches last season, only two more than in 1995, for example, the year of the Champions League that they won. According to the figures of Stats Perform, a top year was the successful year 2018-2019, in which you did not hear any Ajax player complaining because Ajax was floating on a pink cloud; 58 duels mostly pure joy.

The pain is especially palpable when the smile has disappeared from the face, for example after the disappointment as with PSV, with six extra duels in the preliminary round and then ultimately no qualification for the Champions League. The international matches are an additional problem. The Nations League replaced exhibition games, but was immediately made important and developed into a competition of greater intensity. The number of duels is not immediately much larger. The Orange squad played sixteen international matches this year and two more will be added in November. Eighteen is not much more than in previous years with a tournament, seventeen in 2010 and 2014.

The Fifpro union conducted research and found too great mental and physical strain, with less training time and too much travel time, with an uninterrupted rhythm of matches every three or four days, with competitions pushed together by corona and hastily finished. Moreover, with the threat of even more: Fifa wants a World Cup every two years, the Uefa has agreed on a new format Champions League, with ten group matches.

Ajax is increasingly relying on South and Central Americans, often internationals. Copa América, Gold Cup, at least eighteen World Cup qualifiers for the South Americans. Antony also participated in the Olympics. “We have to be careful not to burn it out,” Ten Hag said a few times. In that sense it is understandable, the story of the trainers, who themselves participate in the accumulation of fatigue. They all want to put pressure everywhere, preferably the entire game, a way of playing that takes strength.

But on Saturday Ajax’s smile wins, which was already chiseled on many faces after the international matches. Davy Klaassen remembers his time at Werder Bremen, which only played in the Bundesliga. “Then is a week long.”