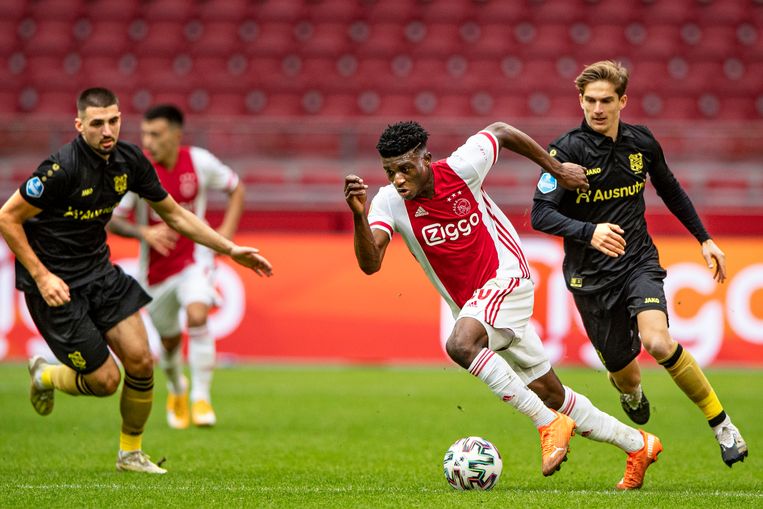 Ajax supporters were already busy on mobile phones with flights, hotels and tickets for the Champions League final against Liverpool on May 8, 2019. In two games it was 3-0, at half time of the second semi-final against Tottenham.

Everyone knows how different it turned out. Tottenham lost the final to Liverpool on 1 June. Ajax’s match against Liverpool will now pass on Wednesday as the opening of the Champions League. In other times, as the hunt for tickets and travel has ceased in football, which is bracing itself against the second corona wave. Captain Dusan Tadic repeated what he said on Tuesday, after the elimination: “I think we would have had more chance against Liverpool in the final than Tottenham.” Musing is allowed.

It is as if it were years ago, that denouement in 2019, as if it were a different era. That is also the case, because the Champions League has started a virtually public release, with players who could just be missing. Forward Antony is not available Wednesday. Corona? Ajax does not want to say anything about that. Privacy.

Best team in the world

Much more than for Liverpool, it is a different era for Ajax. Liverpool has only been more acclaimed since then. ‘The best team in the world’, says trainer Erik ten Hag. ‘The Champions League was won in 2019, the Premier League in 2020.’ Liverpool could set up the total team of the final back then, on Wednesday in Amsterdam, except for the injured Virgil van Dijk. All major players have remained. Logical too. Whoever stands on top of the mountain wants to enjoy the view as long as possible.

How different is that at Ajax, which at the time frolicked over a wonderfully juicy hill. But the mountains beckoned on the horizon. Ajax is almost forced to reinvent itself over and over again. Sponsor Ziggo launched another cool movie this week. The curtains open. On stage, a show of glorious moments unfolds, with goals in Madrid, Turin and London, bursting stands, emotions and stars now spread across Europe.

At Ajax six players from the base of that time, at home against Tottenham, have been sold, with a total proceeds of just under 275 million euros. Matthijs de Ligt, Frenkie de Jong, Kasper Dolberg, Lasse Schöne, Hakim Ziyech, Donny van de Beek.

In addition, André Onana and Nicolas Tagliafico were more or less promised last summer that Ajax would not be too difficult with serious interest. Onana has already given farewell interviews. A transfer was not made, whether or not due to corona. The constant departure of top players is the price of the success of playing football in the training country of the Netherlands. In that sense, too, Liverpool is a huge favorite. Better players, better team, more used to resistance.

Fortunately, football, although Ajax saw the quality seep away, remains in blocks. De Jong, De Ligt, Schöne and Dolberg in 2019, Ziyech, Van de Beek and actually Joël Veltman, injured at the time, in 2020. Last season, football was less than the year before, at least after the group stage, the elimination was there.

Ajax has money to invest, but it is always a question of whether a newcomer is good enough to fill a vacancy. Lisandro Magallan and Razvan Marin have already disappeared from the scene, Edson Alvarez and Lisandro Martinez are not yet undisputed. Antony and Mohammed Kudus are the talents with added value, with Davy Klaassen and Sean Klaiber Ajax also acquired mental strength at the end.

Ajax increased salaries to keep up with the Champions League, but the level of Liverpool is almost unattainable. Partly due to the corona crisis, director of player policy Marc Overmars states that it might be a ‘gap year’ for Ajax, which, for example, would have liked to get another striker. ‘Instead of taking one or two steps forward, the brakes have been stepped on,’ says Overmars on the website. Tadic: ‘Expectations are always high. We just have to be realistic and just do our best. ‘

Ajax has been hit harder than Liverpool; not only because of the exodus of players and the partial rebuilding of the team each time, also because Liverpool annually receives a sloppy 150 million in national television rights and touches more money for the same performances in the Champions League. That provides certainty.

Ajax gets 9 million from the much smaller national TV pot. As with other Dutch clubs, the game income is important. The empty stadium again offers an unreal sight on Wednesday, although Ten Hag consoles himself with the thought ‘that a large part of the Netherlands is at Ajax from the living rooms.’

Normally the passepartouts for the duels with Liverpool, Atalanta Bergamo and Midtjylland had flown over the counter, now no tickets have been sold, which costs at least two million per game. In the interview Overmars expresses its support for the supporters and sponsors. “They’re pulling us through.”

Liverpool are better and further, but have already conceded thirteen goals in five league matches. Ten Hag: ‘That mainly says that they are not infallible, whereas they were in a long phase of the season last year.’