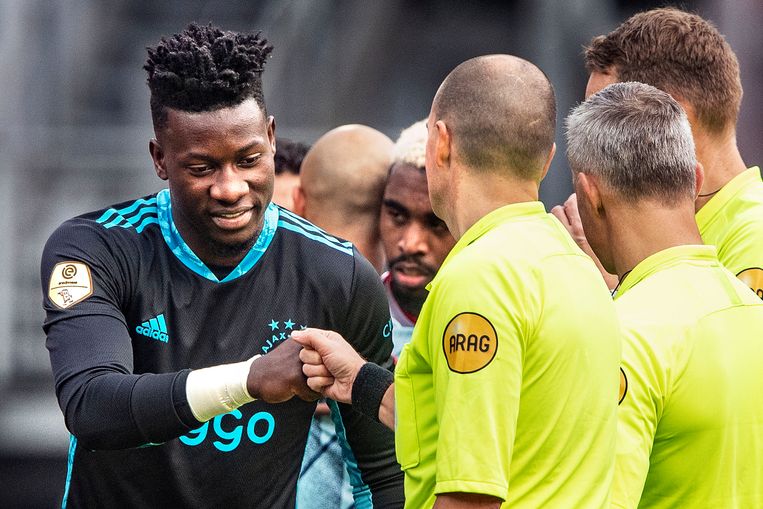 His name is almost never the first in the list of stars, but Ajax will feel the missing goalkeeper André Onana.

At Ajax it is usually about goals, about forwards, or about footballers who are no longer there. Frenkie. Donny. Matthijs. Abdelhak. First names are sufficient. It’s not often about the goalkeeper. Yes, he is one of the eleven. One goalkeeper is better than average, as the current director Edwin van der Sar was the best. The other is just there, like Heinz Stuy used to be, the man of three European finals won with zero goals against.

André Onana is, without a leading role in daily reflections, the best goalkeeper of the premier league. Calm, blessed with athleticism. Impressive figure. Strong. Good on the line, ruling for purpose. Great in one against one. He dares to stand for a long time and trusts his reaction after the attacker’s action. He is also sympathetic. The one-year suspension is also pitying. A great sportsman disappears from the podium because of a forbidden pill that does not help with goalkeeping.

Experts consider it unlikely that Ajax’s appeal to the sports tribunal Cas will benefit. The Uefa was clearly in the verdict. The player is responsible for prohibited substances in his body. Director Van der Sar understood that it sounds implausible, that story of Onana, who is known at Ajax as a slut fox.

That he accidentally took a pill from his wife, a diuretic agent that she used after a pregnancy, and that an unannounced check took place on that very day, in which the banned substance furosemide was found.

In the illustrious history of doping, too many strange stories have been presented to believe unconditionally in a mistake. Seen from this point of view, the decision of the disciplinary committee is not too bad, which refers to unintentional behavior. Hence one year, on a maximum of four years.

Everything is possible. Furosemide to mask other doping. Or to lose weight quickly. Onana is on the sturdy side. Who doesn’t say he wanted to lose some pounds quickly? Van der Sar cannot imagine it with such a top athlete. Van der Sar also rejected the suggestion that Ajax should have bought a goalkeeper in the transfer period, in anticipation of a suspension. Then it would immediately have been about a possible departure of Onana, because no one had predicted a doping case. Onana wanted to leave before the season, but interest remained limited, partly due to corona.

Van der Sar expressed confidence in the three other goalkeepers and named Maarten Stekelenburg first. A name from the past, who has often been a reserve abroad since his departure from Ajax in 2011. He is 38 years old and the times he played this season made a decent impression, but he is no shadow of Onana.

Kjell Scherpen is a big guy, but in the cup match against FC Utrecht, won by Ajax 5-4, he made an uncertain impression. Dominik Kotarski’s performances have not been unforgettable yet either.

Onana made one blunder this season, at Liverpool, when he let the ball go and Jones scored from a difficult angle in the Champions League. A crucial mistake, though, because that forced Ajax to win at home against Atalanta and that failed. And there are still supporters blaming Onana for Tottenham’s last-second elimination in the 2019 Champions League semi-finals, as referee Brych was fed up with his time.

In any case, the suspension costs Ajax millions. Onana is normally suspended until halfway through next season and receives a million salary. A transfer in the summer is unlikely, while Ajax may have to buy a new goalkeeper. But that’s the longer term. In the short term Ajax will mainly miss him, although he often does not get anything to do in the premier league. In Emmen he was almost exclusively occupied with stretching and stretching.

But Ajax can play offensively, with room in the back, because Onana is so good, also for goal. For example against Lille, last year in the Champions League, Ajax won 3-0 and 2-0, but both results were flattering. They came about thanks in part to great goalkeeping work by Onana, who often grabs a ball against which others just get a hand. This month, Ajax will play against Lille again in the Europa League, which is in better shape than last season.

Onana is an essential part of Ajax’s game strategy. Like: it will be fine, because Onana is still there. They will miss him.