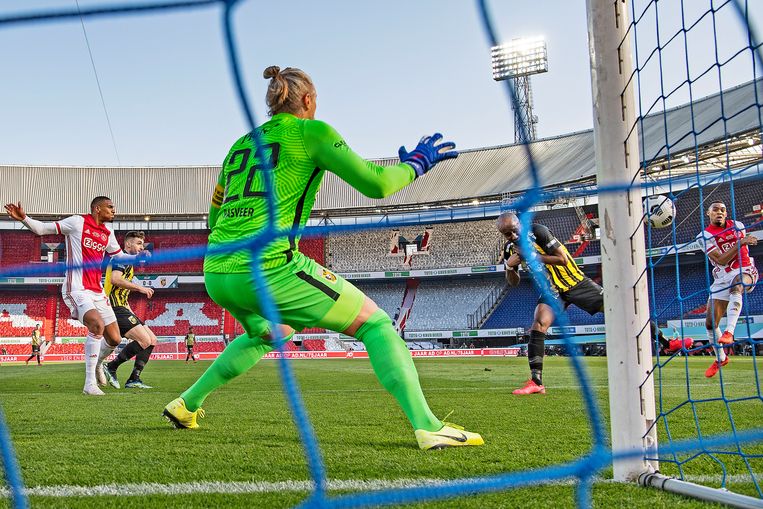 In a somewhat messy, fairly open final with occasional sparkles, Vitesse demanded a lot from Ajax. Yet Ajax won its first of two national prizes, three days after the elimination in Europe.

Cup in, after the 2-1 against Vitesse, celebrated with an enthusiastic round dance of the selection and a funny sprint by Davy Klaassen with match winner David Neres, armored as soul mates. And the championship for the team of trainer Erik ten Hag is a formality, possibly celebrated in a week against AZ.

Ajax reigns in the Netherlands, just like in the previous season that was played to the end, 2019. Although Vitesse offered reasonable opposition on Sunday, especially in physical and tactical terms, and could cherish hope for the second cup win after 2017 until injury time.

Only in the 91st minute did David Neres score with a neat diagonal shot from close range, after a cross from Ryan Gravenberch and a header duel won by Sébastien Haller. The ball fell perfectly at the Brazilian’s feet. In a way, the hit was a punishment for the rash foul with which Jacob Rasmussen kicked Neres’ predecessor Antony off the field five minutes earlier. Referee Björn Kuipers rightly gave red. After the 2-1, there was hardly any time left for Vitesse, although Riechedly Bazoer put goalkeeper Maarten Stekelenburg to the test with a free kick.

Ajax recovered mentally from the elimination in the quarter-finals of the Europa League, at AS Roma on Thursday. The harvest in the ‘gap year’, as director of football affairs Marc Overmars announced the season, partly because of the exodus of important players and the influence of corona, can be called almost maximum.

Although the early elimination in the Champions League remains a pain point for the ambitious Ajax, which also failed to win against Roma. It was striking that Ajax looked fitter after the break, despite Thursday’s efforts. “I am proud of the team’s resilience,” said Ten Hag.

It was a lovely, sunny evening of the tournament’s denouement, with the shadow slowly moving across the field and opportunities from solid play regularly presenting themselves. Many opportunities for Ajax, occasionally one for Vitesse, which had its best phase in the first fifteen minutes. In a sense, the game went exactly as expected. Fast dribbles from star Antony, excellent goalkeeping work from routine Remko Pasveer.

Yes, it was also a messy final, with a lot of ball loss, many fouls too, sometimes gross in nature. That is also the result of the approach of Vitesse, which disrupts opponents in the 3-5-2 line-up of trainer Thomas Letsch. Vitesse is the surprise of the season and proved to be able to play football well against the national top, although it was against Sunday in terms of football and, just like before in Amsterdam, Vitesse lost 2-1 for the competition.

Only the people were missing for the total experience, for that wonderful atmosphere of such a final, the feeling of happiness of such a day, with a wall of supporters of both teams behind the goals, with neutrals on the long sides. But at least there was a final battle, unlike last season. Moreover, an exciting match in which surprise was lurking for a long time.

Vitesse has shaped itself nicely this season according to the ideas of Letsch, who gives his best players freedom and lets them attack harmoniously and with discretion. Not with excessive risks, but with conviction. Bazoer and dribbler / playmaker Oussama Tannane are allowed to excel. Both disappointed. But first it is a matter of boarding up in the back.

Ajax was better, certainly from the twentieth minute, sometimes combined quickly and opened the score when the dynamic Ryan Gravenberch was released at the far post to chase the ball into the goal with the left. Six minutes later the equalizer fell. Lisandro Martinez was easily trumped by the strong attacker Armando Broja, whose cross was for Lois Openda. So it was 1-1 at half time.

In the second half, Vitesse fell far back and Ajax left various possibilities untapped to decide the duel earlier than in injury time, with Antony as the spearhead. The Brazilian is structured, haggled well, threatened and shot frequently. In the final phase he attacked in full sprint along the sidelines, after which his run was roughly interrupted by Rasmussen, whose leg was raised much too high during the sliding.

It turned out to be the prelude to defeat. For example, Ajax won the KNVB cup for the 20th time, with teenagers Gravenberch, Jurriën Timber and Devyne Rensch playing an important role. By the way, it has been a nice trip. Beaten FC Utrecht, PSV, AZ, Heerenveen and Vitesse.