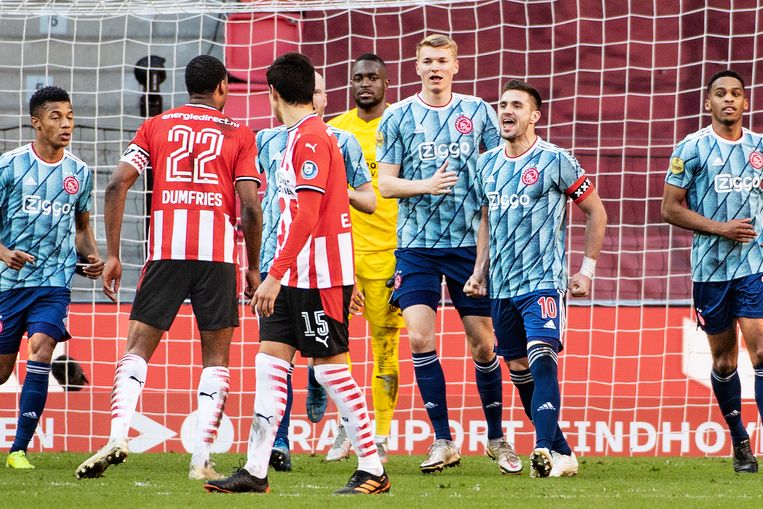 PSV again conceded a goal in the last minute (1-1), so that the difference with leader Ajax remains six points, with a duel less for the likely future champion Ajax. If the game with the ball on Sunday had been as good as the release of hormones, a real hit would have taken place.

The apotheosis of PSV – Ajax was unworthy of football, with pros and their regurgitation of misconduct. It started, at 1-0 and a few more minutes of play, with the stupid foul by Donyell Malen in the corner of the field, in a phase that Ajax didn’t get ready and seemed beaten.

Then the free kick, the scrimmage, the shot of Davy Klaassen, the desperate swing of the arm by Denzel Dumfries (‘all hands on deck’) with which he stopped the ball that would otherwise almost certainly have gone into the goal. Hands.

The penalty kick then. The unsportsmanlike nature alone. Dumfries tries to dig out the dot with his shoe sole. Tadic: ‘He made a well. He said I was a pussy, not a leader, that I would miss. ” Tadic just hits the mark and apparently shouts something about Dumfries’ mother. “I don’t remember that exactly,” said Tadic. ‘But obviously I’m not going to thank him for calling me a pussy. You should never do this with Serbs either. We draw strength from provocations. ‘

Dumfries reacts so angry that they have to restrain him afterwards. He throws away his captaincy. Moments later, he is remarkably calm again in front of TV. ‘Men among themselves’, he says. But certainly in such an empty stadium without an audience, in which you hear a lot, it is really poor, such displays. Especially when there is so little football in return, on a field that makes good play almost impossible.

Anyway, PSV deserved the victory, because PSV was less bad and met Ajax in one of its weakest duels this season, where it is always the question to what extent that was up to PSV and where to Ajax. PSV played with passion, that’s for sure. ‘We were also motivated by our supporters who escorted us to the stadium before the match. We deserved to win ‘, said goalkeeper Yvon Mvogo.

Eran Zahavi, whose four goals against Olympiakos were not enough for a place in the eighth finals of the Europa League by a Greek goal in the final minute on Thursday, thought he was the match winner until shortly before the end, thanks to a nice free kick in the first half. Zahavi played well and fanatically, feeling Lisandro Martinez getting on his leg willfully in the second half, another sign of misconduct that stained the game.

As difficult as the first ten minutes were for PSV, with an imminent surprise and opportunities for defenders Devyne Rensch and Jurriën Timber, that’s how well the team of the much-discussed trainer Roger Schmidt fought in the match. PSV dared, attacked with increasing conviction where possible, and thanked Zahavi.

In the short corner

The somewhat typical striker, who often came from midfield, made great use of the free kick. It was quite shortly before half time, after a violation, after Ajax’s umpteenth loss of ball. It was possible to see exactly how he was going to do it, over the wall in the short corner, and yet it worked perfectly.

PSV put good pressure and had also shown this in previous duels against Ajax, although that was over too short phases. Now Ajax gave the opponent every opportunity. Schmidt did make a good move by moving Olivier Boscagli to midfield. The Frenchman is not a ruthless defender, but he dares to pass and cross lines. Boscagli was close to 2-0 after an hour, but saw his effort beautifully stopped by Maarten Stekelenburg after a corner.

After the break Ajax had to hunt for at least the equalizer. PSV’s 2-0 was canceled, because the VAR had seen that Yorben Vertessen got the ball against the arm after the carom with Stekelenburg, and in an attacking sense it is hands. Ajax was able to force almost nothing, except for a header from Haller.

And then, when the match seemed lost, Ajax got that penalty kick, which opened the way to the escape, and put Ajax in an armchair towards the title. “We can blame ourselves for not making 2-0 and 3-0,” said PSV trainer Roger Schmidt. Colleague Erik ten Hag of Ajax: “We won 1-1.”